Firestarter by Stephen King and More: Children in Heat III 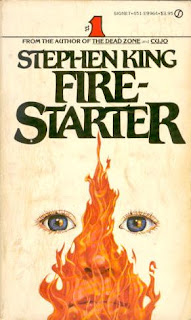 More creepy kids and their raging fire fetish! There is the virtually-unknown - let's make that entirely-unknown - William Dobson, with his all-too-aptly titled Child of Hell (1982); then the stalwart Ramsey Campbell with The Influence (1988), another in his long line of paperbacks from the Tor horror line; and perhaps the ultimate novel of a fire child, Stephen King's Firestarter (1980). 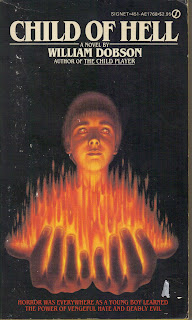 Dobson's book seems like a straight ripoff of King's bestseller; I only bought it for its cover (kid with bowl cut, check) and its ad absurdum title. I mean, virtually every single creepy kid book could be called that; it's like titling your horror novel Good Versus Evil or Scary Monster or Do Something Stupid and Die. Ugh. 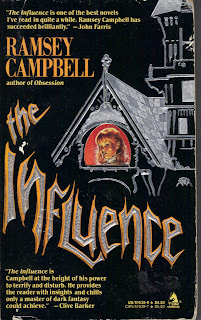 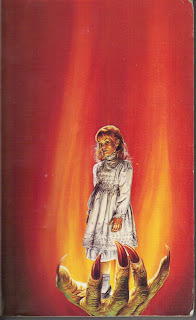 Campbell's eighth novel has some respectable blurbs on it and seem like it'd be a decent read but I really think I prefer his short stories. Compare this cover to The Nameless or someone else's work of flaming youth, Audrey Rose.

The only of these that I have read is Firestarter, King's sixth published novel. I've always thought of it as a lesser novel of his, though I'm sure it has its fans. The paperback cover art is the same as the hardcover, which I like. King has said that during the late '70s and most of the '80s he was writing books like it, Cujo, Christine, and The Tommyknockers, et. al., while drunk or jacked up on cocaine and therefore doesn't remember actually writing them at all (why, those are the same reasons Drew Barrymore doesn't remember making the movie, haw-haw). I myself recall almost nothing about reading it, so I guess we're even. 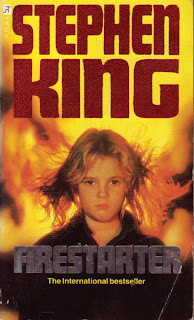 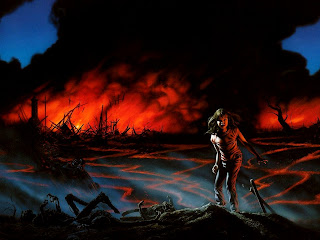 Michael Whelan's cover for the 1980 limited edition hardcover
Posted by Will Errickson at 2:45 PM

"Do Something Stupid and Die". heh.

King has blamed cocaine for Maximum Overdrive.... The movie is clearly the work of someone on crack, so I guess he wasn't being entirely untruthful.

Every time I hear about King's admission of rampant druggin'-and-writin' I'm always stunned. Don't know why. Maybe because I read so many of the aforementioned books--Firestarter, Dead Zone, Cujo, etc.--when they were new and when I was in Jr. high, so I'm freaked out to think I was reading the work of someone influenced by drugs instead of exclusively an overactive imagination.

I'm very grateful you included both parts of Campbell's cover!