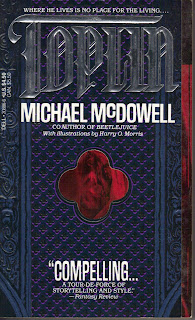 Toplin fits very few subcategories of horror fiction, and upon finishing I'm not entirely sure the word "Horror" on its spine is deserved; it's unsettling in places but not scary. But then I'm not sure what genre would be appropriate. Author Michael McDowell wrote many paperback horror originals (as well screenplays for Beetlejuice and The Nightmare Before Christmas) dealing with family curses and historical haunts, but Toplin seems unlike anything else in his oeuvre. Originally published a limited-edition hardcover by horror specialty publisher Scream/Press in 1985, it saw print again in paperback (seen above) in August 1991 thanks to Dell's Abyss imprint. The Abyss line of experimental and challenging horror fiction (see Kathe Koja's The Cipher) was a perfect home for this surreal first-person novel of a near-anonymous man living in a horrifying world that he perceives as strangely as if he were an alien on earth. 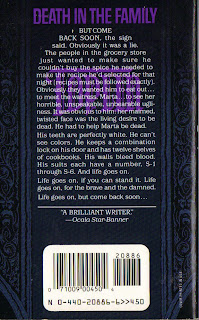 With his obsessive, disaffected detailing of the geometry of place and thought, of numbering and organization, Toplin himself seems like a character out of J.G. Ballard's magnificent experimental "novel" from 1970, The Atrocity Exhibition. The symbolic nature of the corridors in his apartment seems just out of reach - a man with a mind such as this is probably adding up the degrees of corners and planes in his home to arrive at the date of the Apocalypse, or the day he will assassinate the President. In Toplin's case, he will instigate the death, and therefore freedom, of Marta, a horribly deformed waitress at his local greasy-spoon diner to give his life meaning.


The disfigurements of her birth were compounded with the ravages of disease. I saw them in her face. Her mouth was a running sore. Her bulging eyes were of difference colors. Her ears were slabs of flesh pillaged from anonymous victims of accidents. her nose was a bulging membrane filled with ancient purulence... beneath her uniform I sensed - I smelled- ever greater deformities. Her uniform, stained to a filmy translucence by God knew what manner of excretions, showed the irregularities of her skin beneath. 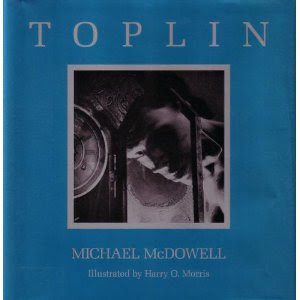 The motley cast of dingy, repellent, enigmatic characters is practically out of "Desolation Row," and McDowell intimates that they all might be either figments of Toplin's imagination or symbols for various aspects of it. Random street people run into the diner and harangue customers about pornography and government corruption. His coworkers seem to exist only to play a deadly practical joke on him that leaves him color-blind, but it's a situation into which Toplin could have gotten himself into. He consciously attempts to befriend Howard, a young deliveryman Toplin sees every day at work.


He must see the interiors of so many offices and many flats. In the doorway of how many livings rooms has Howard stood... into how many lives has Howard entered, albeit in the most peripheral fashion? Has he been affected by this experience with the apartments and offices of total strangers?

Howard's grandfather seems to be an insane old scholar, now locked in a room in the home they share. The nighttime streets are prowled by an ultimately violent street gang called Tempis Fugit. Marta's maintenance man is a hermaphrodite - or is he simply Howard in disguise? And you don't even want to know who Toplin has regular consensual sex with. Everything in Toplin is askew, deranged, crumbling, so much deformity beneath one roof he muses at one point. His occasional rants about effeminate men bring on the usual suspicion. He's paranoid, unreliable, solipsistic, monomaniacal - you know, quite mad. 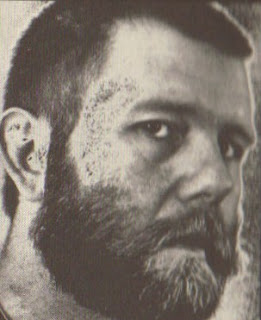 This works in places, but reading Toplin in fits and starts breaks its spell; once I was reading 50 pages at a time its ghastly psychopathology was able to seep into my head... some. It only really captured me here and there and the ending was about as obscure as I'd anticipated. McDowell (pictured above) is a fine writer and I'm looking forward to reading his more traditional early '80s horror novels such as Cold Moon over Babylon and The Elementals, but I feel that Toplin is a bit underdone, maybe too abstruse for its own good. The paperback publisher has blown up the print so the book is 277 pages long; in its original hardcover it is 186 pages. The solarized illustrations in the middle of the book, by Harry O. Morris, a holdover from the hardcover, are a little too on-the-nose to be truly disturbing but are still creepy. And then again, how much time do you want to spend in the head of someone who thinks the slime built up in my testicles, and I made no effort to release it. I felt its slow poison seeping through my body?
Posted by Will Errickson at 9:48 AM

This, along with Kathy Koja' "The Cypher" is at the very top of my horror book list. Toplin is the one book I felt compelled to violently throw at the wall. Twice. It should, given a strong mind, be read in one sitting. Creepy just doesn't even come close. It won't affect a lot of people probably. But then, it took me quite a while to 'get' H. P. Lovecraft.

And TOPLIN is *nothing* like McDowell's other horror novels.

I enjoyed it immensely. I battered through it in two evenings.