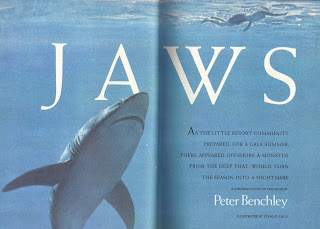 Ugh, Reader's Digest Condensed Books. I can't really imagine a more anti-book concept. Four seemingly random bestselling novels are "condensed" so that they can be stuffed into one volume so folks who don't care about reading can decorate their mustard-yellow and pea-soup-green living rooms. Everyone knew some family who "collected" them, could have been your own. It was always a depressing sight to walk into someone's home and see these books; these weren't people really interested in reading or collecting books per se. Reader's Digest Condensed Books were just another knick-knack taking up space on shelves.

They were one step up from junk mail and so were most of the authors published (do you remember such musty-crusty authors of yesteryear as Taylor Caldwell, Howard Fast, Conrad Victor, Victoria Holt, Helen MacInnes, or Morris West?). They devalue everything I, and countless others, love about books as objects. To me these things are exemplars of the horror of middle-brow American taste throughout a sizable chunk of the 20th century. 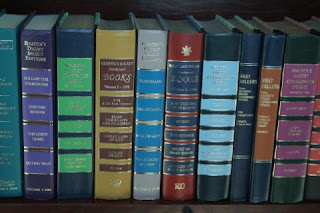 And then add the artistic crime of tampering with an author's intent for his work by removing anything that wouldn't upset the sensibility of your average viewer of "Hee Haw" or "Mutual of Omaha's Wild Kingdom," and you get the literary equivalent of Spam and Kraft Singles on white bread with mayonnaise and yellow mustard. Plus these things (along with National Geographic mags) were the bane of the used booksellers' existence; no one would buy them secondhand and I can only imagine the landfills they're choking up now.

All that said, aren't these illustrations (by Stanley Galli) for the 1974 Reader's Digest version of Jaws pretty cool? Yeah, I thought so too. I saw it once when I was a kid, was blown away by it, and I literally only found it again last week on eBay. So wonderful to see how the story was imagined before the movie. 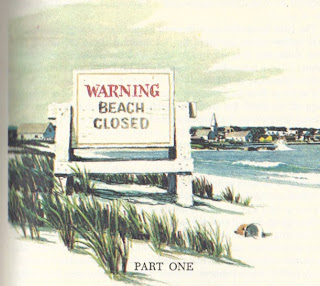 For the literal-minded who still can't quite keep all those characters straight (why, Dostoevsky's publishers should have thought of this!):

A nerve-wracking scene in the novel in which nobody gets eaten; probably the inspiration for the two old guys who get the pier pulled out from under them when they try to bait the shark with a Sunday roast. 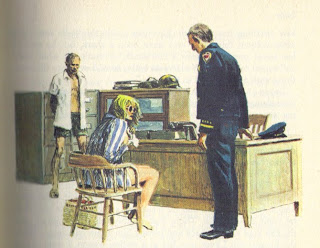 Poor Alex Kintner's mom. Here she looks the right age; in the movie she looks like his grandmother, right? 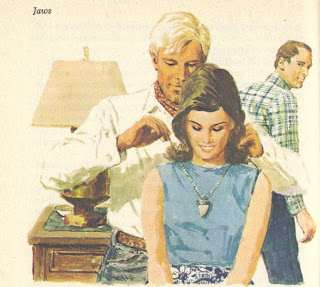 Hooper and Ellen Brody have a fling in the novel (she'd dated his older brother in college). At a dinner party, Brody watches warily but never catches on. Makes for some tension on the Orca later, as if hunting a 25-foot man-eating great white shark weren't aggravating enough. 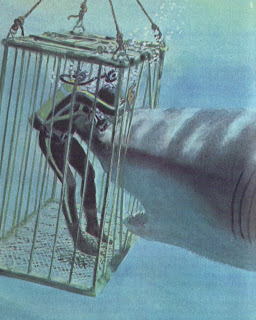 Hooper never makes it back from his little shark-cage foray. He's pretty douchey in the book so nobody's really sorry to see him go. His last thought is something like, Oh my god, those jaws are going to reach me, but you won't find that line here.

And the climax. Awesome. Except Quint doesn't get eaten and the shark just sorta dies quietly. You can bet Quint's immortal line "I can see your cock, you bastard!" was tastefully deleted.

And finally: Brody finds the way to go home.
Posted by Will Errickson at 6:30 AM

Despite your scathing review of Reader's Digest books, they seem so campy I might actually look for a few. Those illustrations are wonderful.

Believe me, I do not miss the irony of "collecting" one of them. Not sure if all the volumes had illustrations or not, but if you look at the list of books they condensed over 30 or 40 years, you will be astonishingly bored.

This is an incredible post. Thanks for doing the legwork and scanning. It sheds a lot of light on what is described in the book (i.e. how characters look) and what the film turned it into.

Thanks, peelslowly. I too was intrigued by how the novel was imagined before the movie. I've read that Benchley originally wanted Newman for Brody, Redford for Hooper, and McQueen for Quint! I guess that maybe explains the squared-jawness of the character illustrations.

I had a sister-in-law that had a ton of these things. I think she gave them all away to a church sale when she moved.

I love this post. Makes me want to scour my grandmother's basement and see if this particular RDC book is there - these illustrations are so vintage!
And now I realize how hokey my grandparents really were - they watched both Hee-Haw and Wild Kingdom, in addition to reading those damn condensed books. It's amazing I turned out halfway normal...

Believe me,I remember Hee-Haw and Wild Kingdom all too well. Jaws is a part of all of that '70s culture.

Love this post - great scans! I'd love to see them all. Wonderful work as usual.

Those are all of the good ones, Gilligan. No good chomp action, alas. Thanks for stopping by!

Jesus Christ, I remember that book...are you sure you're not me?

As a kid, I never read the full Jaws novel, but I did read the Readers Digest condensed version, and loved those fantastic illustrations. Actually, after getting over nearly getting the pee scared out of me seeing the movie in the theater when I was just ten years old, I realized I was a bit disappointed that they hadn't managed to recreate that scene where the shark jumped completely out of the water and slammed down on the boat. Would have been impossible with 70's special FX technology, of course, but no problem for the CGI of today.

Oh, that same edition of RDCB included "The Dogs of War," which had an illustration that certainly excited the imagination of said ten-year-old...when mercenary James Shannon is in the company of a young woman who slips off her dress as he is turned away from her, so when he looks back he sees her standing there wearing nothing but a thin gold waist chain. He says something like, "I thought you were Daddy's sweet little girl," and she replies, "That's what they all think, especially Daddy. Now it's your turn."

Hmmmm...and I thought these RDCBs were completely scrubbed of anything that might upset the average Hee Haw viewer?

Obit of the illustrator, Stanley Walter Galli, who died May 2009 at age 97:

Thanks for the obit link!

OT: Regarding RDCB and the author Taylor Caldwell...I happened to read a paperback novel called Wicked Angel by Caldwell back in the day and it was actually very gripping. It was one of those Bad Seed-type books , thus the title. I still remember one passage where the aforementioned "Angel" who was appox. 7 or 8 yrs. old, kicked his pregnant mother(?) in the stomach! It's worth a read if you can find a copy, but good luck. I haven't run across one since, and don't know what happened to the one I once had either. It was a good read though as I recall. Just sayin'...props to TC.

I actually have weirdly strong memories of the spines of those Reader's Digest Condensed Books; they decorated the resort where I spent my summers as a child. I don't recall ever reading them, but just the sight of those spines brings back intense memories of swimming, hiking, fishing, et cetera.

They take me back to summers as a kid too! I remember reading the RDC edition of JAWS 2 (which alas didn't have nearly the awesome accompanying art as this) over and over again at the beach...

A person in the internet said...

Do you have more of this illustations?

That's all of them!