There is no delight the equal of dread.

So begins the aptly titled "Dread," the lead story in the second volume of Clive Barker's essential six-volume collection, Books of Blood. In a way, it's a mantra for his early novels and tales, a neatly-done epigram that sums up not just his work but the entire horror genre itself. Filled to bursting with woundings and madness, monstrous absurdities of flesh and bone, and the nonsenses of fear, despair, and revulsion, Volume 2 is one of my favorites in Barker's series and contains two of his very greatest stories. 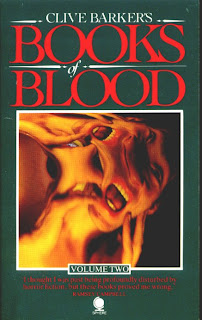 College students and their mad messiah: "Dread" takes a philosophical approach to terror, as strange Quaid posits that fear underlies everything humans are. Nation, family, Church, law. All ash. All useless. All cheats, and chains and suffocation. There was only dread. Don't you know that Quaid, who forces others to face their fears, will have his never-ending moments of dread himself? This is often considered one of Barker's finest moments and has turned up in several best-of horror anthologies. I wholeheartedly concur with this sentiment. 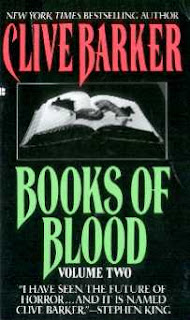 Hell hot on runners' heels, the infernal nether regions come to race, literally so, in the streets of London. In "Hell's Event," Barker imagines, Without the human urge to compete, and to bargain, and to bet, Pandemonium might well have fallen for want of citizens. Don't look behind to see who's gaining on you, runners; remember Lot's wife. Clever boy, Clive Barker. 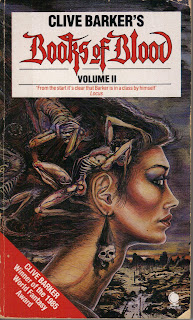 On the UK paperback seen here, illustrated with Barker's own art, we have the title character of "Jacqueline Ess: Her Will and Testament." Easily one of my favorites of all Barker's fictions, as it is a perfect example of his mastery of economic characterization, copiously inventive bloodletting and bodily injury, and the twining tight of Eros and Thanatos (he said, consulting his thesaurus). Too long beleaguered by the ennui of modern life and the condescension of men who think they know better, Ms. Ess discover she has the power to bend them to her will. And not figuratively. Behold her belittling psychiatrist:


She thought: Be a woman. Simply, as she thought that preposterous idea, it began to take shape. Not a fairy-tale transformation, unfortunately his flesh resisted such magic. She willed his manly chest into making breasts of itself and it began to swell most fetchingly, until the skin split and his sternum flew apart. His pelvis, teased to breaking point, fractured at its center; unbalanced, he toppled over onto his desk, his face yellow with shock. 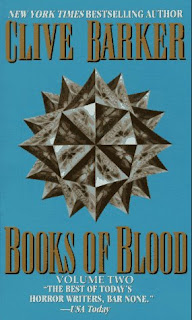 In the baking Arizona desert, "The Skins of the Fathers." A lone, stranded motorist sees the full riot of what Clive Barker can describe as a procession of monsters cavorts in the shimmering distance, like something out of Bergman's Seventh Seal, one whose head is a cone of exposed teeth, another is three-winged, and two more are married in a union of monstrosities the result of which was more disgusting than its parts. It can only get worse from there, can't it? And finally, an update of Poe in "New Murders in the Rue Morgue." It had come to this; offered a human woman by this naked ape... From love to murder back to love again. The love of an ape for a man. A man, an ape, and a woman. And a happy ending for two of those three. 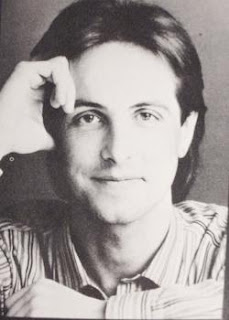 So remember, upon reading Books of Blood, Volume 2 - or indeed any tome of horror - that there is no delight the equal of dread... as long as it's someone else's.

Posted by Will Errickson at 5:40 PM

Except for Dread and Hell's Event (the former excellent, the latter funny), this section of The Books of Blood kind of fell through the cracks for me. None of the other stories really rang my chimes.

Ah well--this one was always my favorite since I first read them, thought they were the most colorful and bizarre as a whole. I love Volume 5 about as much, but as for best single story? Might have to say "In the Hills, the Cities" from Volume 3. Been fun rereading them after all these years, though. I can really see how Barker influenced my own writing.

I tried to post a comment here the other day. Don't know if you heard (I found out by luck when I googled Clive Barker last week) but they are making a movie of Jacqueline Ess! Hopefully it's not a flop. So excited for that.

The Books of Blood are fabulous, tied with The Illustrated Man as my favorite collection ever.
My top 3 stories from Book of Blood? Easy:
-Scapegoats (oh God the mindfu*k this gave me)
-The Last Illusion
-and of course, Ms. Jacqueline Ess

Sooo many great stories though.

I did hear about the JE movie adaptation... hope they get it right!

Don't know if I could come up with my fave stories, but that one and "In the Hills, the Cities," "Body Politic," and "The Age of Desire" spring to mind now. AFAIC, the whole series is the pinnacle of '80s short horror fiction.