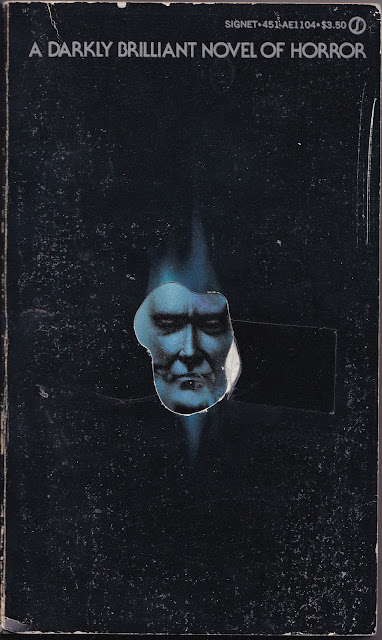 I'll be honest: Bari Woods's books are ones I've seen in used bookstores for decades—decades I tell you—and I have never been interested in them. I mean not ever. Titles like The Killing Gift, Amy Girl, Doll's Eyes, and even Twins, the basis for Cronenberg's masterpiece Dead Ringers, did nothing to whet my horror appetite. Actually I'm certain I wouldn't have really appreciated The Tribe (Signet Books, Nov 1981) when I was in my early 20s, World War II and Nazis, ugh I mean old news. It wasn't until I read Grady Hendrix's review a year or so ago that my interest was piqued. And what a delight it was to be so well-rewarded: The Tribe is a superb, thoughtful thriller about a series of gruesome murders over several years and a group of aging Holocaust survivors living in New York City. 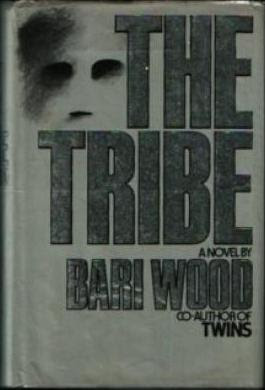 A novel that uses one of history's ultimate horrors not as an exploitative stage already set, but as a window to peer into the evil that can live and thrive in even the kindest, most unassuming soul, The Tribe offers no groundbreaking advancement in the genre, nor is it a summation of it or anything so profound. Dare I even say it's horror? Stylistically it is more akin to The Exorcist or Silence of the Lambs (yet had no movie adaptation to launch it into the pop culture stratosphere): aimed squarely at that mainstream of general readers who've never heard of Lovecraft or Matheson or Bloch or Blackwood. 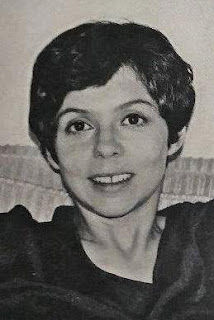 Beginning with one of the strongest, most mysterious prologues I think I've ever read, it is a humane work, concerned with more than solely horrifying readers (although it absolutely does). And Wood, unlike many a genre author, writes like a true pro: she knows her characters, even minor ones, and imbues them with life, desire, and love, with a sense of duty and sacrifice, of overwhelming fear and hate and vengeance. The story's tempo reminded me now and again of a solid '70s film in its plot beats and character arcs, and in that sense The Tribe truly is of its time. And that's okay with me!

Oh that enigmatic prologue, it's a model of the form. American forces have liberated Polish death camp Belzec, and found the German officers near death while the Jewish inmates are healthy and well-fed. Major Bianco must know what happened, and he interviews Speiser, the Nazi commandant at Belzec. What Speiser tells him is obscured to the reader, but its suggests madness and the unbelievable, a vast and dark horror that drives that Nazi commandant to insane laughter even as he contemplates his execution after Nuremberg. Dang it's so good. New York, 1970s-ish. A young Jewish professor named Adam Levy is mugged and murdered on the Brooklyn streets while on his way to visit his father, the rabbi Jacob Levy. This sad yet prosaic event—the one thing everyone knows about New York is how easy it is to get murdered there—sets all in motion. Roger Hawkins is a black cop and Nam vet who has long known Adam, and been a dear friend and something of an adopted son to Jacob, and it is he who breaks the terrible news to Jacob and Adam's young and pregnant wife, Rachel.

Here Wood deftly interweaves the origins of this friendship between a middle-aged Jewish man whose son is away at the University of Jerusalem and a young black cop with ambition: their days discussing life and literature in Levy's small bookshop along with Levy's fellow survivor, big, handsome Isaac Luria, who generally has no time for Hawkins. Jacob Levy is the kind of unassuming man in whom others instinctively place their trust, love, respect, and honor; Luria may be jealous of Hawkins, or maybe he just hates black people. Later Hawkins and Adam will become friends, but Hawkins realizes he was some sort of substitute... yet that doesn't diminish his deep affection for Levy. 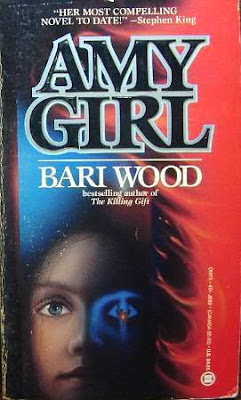 Almost immediately five teenagers are picked up for Adam's murder, gang members who hung out in a filthy clubhouse, but the police find no evidence connecting them to Adam's murder. Hawkins is angry and frustrated, doubts they'll do any kind of hard time if they even are convicted... but then all five boys are found again in that clubhouse, only this time... they are dead, smashed, broken, torn apart, in a graffitied room splashed with blood and, oddly, gray slime and mud smelling of a swamp. His gorge rose but he made himself look. Femoral blood leaked slowly, marrow oozed out of smashed bone on the muddy cement floor. Hawkins retched and dropped the flashlight...

Some of Hawkins's fellow officers mention the obvious but the impossible: that Levy, or Luria, or others of their "clan," are responsible for the murders ("If you say that again," Hawkins says to one cop, "I'll tear your fucking head off."), but surely that is ludicrous. When a neighbor witness comes forward, Hawkins is afraid he'll describe Levy... but he doesn't. Instead, he describes three maybe white men he saw outside that clubhouse, and a fourth: "Oh God," he moaned, "the fourth one was bigger..." and improbably denotes a man nine feet tall and three feet wide... 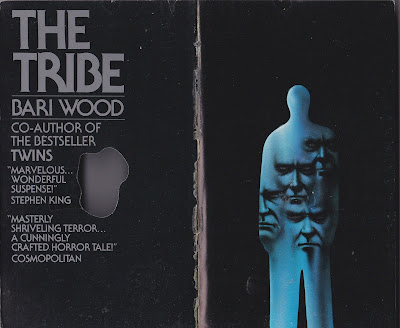 But this is all only Part 1 of The Tribe. Part 2 is about Rachel Levy, Adam's widow. She has Adam's baby, names her Leah, and she and her father-in-law move away from the city and learn how to care for the baby together. Time passes, and Rachel wonders about Hawkins, who'd been so close to the Levys prior to Adam's death. She remains horror-struck by what happened to the boys who killed her husband, but slowly tries to regain her life. She meets and begins to date well-to-do Allan, and spends time with new neighbor Willa Garner, a black woman who moves nearby with her doctor husband and their children, who take to Leah. All of this is written in a warm, knowing, familiar style—who doesn't find descriptions of Jewish home life and especially food, and all those Yiddish words peppering conversation, cozy and comforting?—but there is more darkness to come.

It's at this point that the reader learns of the silent specter haunting the novel. One day Rachel looking for canning jars in her attic, she comes across an old schoolbook of Jewish folklore, flips through it, then alights on something that piques her memory: Rachel read the first few paragraphs. It wasn't a man, but a monster shaped like a man. It was called a golem and it was made of clay. Clay. That was the connection. A child's horror story that must've given her nightmares, and that came back to her when Ableson [one of the investigating officers] said clay. That simple. She went back to the beginning and read the whole story... 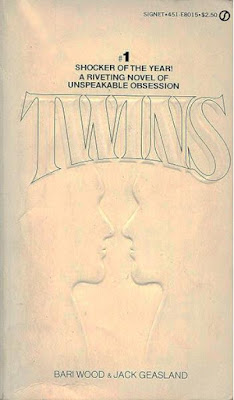 The golem, we learn along with Rachel, is a giant, silent, mindless creature made from mud through a series of occult rituals, and controlled by its maker. It is built by a rabbi at the bequest of an angel, the legend goes, in 16th century Prague to defend the Jewish ghetto from marauding Gentiles. It is a hellish story about playing God, an amoral fable of the long conflict between Jews and the rest of the world, about protecting one's people at any cost, and it chills Rachel to the bone with its mind-bending implication: And forever after that, the Jews in Prague lived in peace... 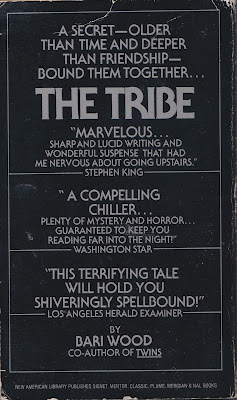 In grieving anger, Luria goes to Jacob Levy and demands Levy "Prove to me you loved my grandson!" Wood takes us back to Levy's boyhood in Krakow, when his father takes him to a Cabalist mystic living in the forest ("Cabala isn't dumbheads looking at palms and calling up demons"). What can this boy do to protect his family from the encroaching Germans? And here it all begins. Wood draws the past and present together, showing how the friendship between Levy and Luria hides many horrors, not all of them human.

More death is coming, the worst of the worst, and Rachel and Hawkins meet up again and maybe are falling in love and there's a Jewish gangster and more about what happened in Belzec and of course the past is not a precursor but woven into every part of life. Rachel and Hawkins slowly try to investigate the murders, trying to convince people of the impossible, that it is not only possible but actual. Please God, Rachel thinks as the enormity of the task ahead and all they must do to face it, rises in her mind, don't let me die tomorrow. I won't give away any more of the plot, so let me move on to general insights. 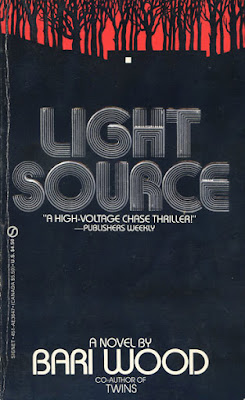 There's a lot of cop politics for a horror novel, and a lot of "romance" for one too, and the ancient Jewish mysticism of Cabala, some of which I vaguely remember from my college days when I studied religious history. There's a warm humanism, a pragmatism, threaded throughout the novel that is not often found in horror fiction, so much so that, as I stated above, it makes me doubt this is actually a "horror novel." Using the smooth narrative rhythm of popular bestselling fiction, Wood eschews generic bloody excesses, clumsy graphic sex, and pulpy sensibility. Woods depicts the monstrous in the midst of a carefully-denoted reality, perhaps the key to any successful work of make-believe. Mundane details, like a drawn curtain or a child's pig lamp, are noted again and again. Also particularly good is the payoff for that prologue, stick around for that set-piece of horror mayhem.

I will say The Tribe is a helluva book for folks who like good reads. The characterization shines: rich, warm, and enveloping, the crossing currents of life, the threads that break and the ties that bind, the budding of romance and the rising of hate, the caustic stain of fear and the slow poison of bigotry, the primitive desire for vengeance, for retaliation, for identity: Wood is adept at depicting all in a mature, satisfying manner, how traumatic history affects the present, and I think she handled with good faith the racism and prejudice that plague even minorities. And this is a book about minorities, religious, racial, sexual, intellectual, and mystical, all those who must defend themselves against the larger world. I mean, the book is called The Tribe, after all. 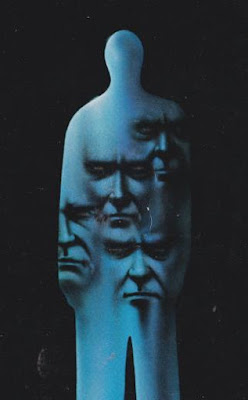 Posted by Will Errickson at 5:59 PM 5 comments: 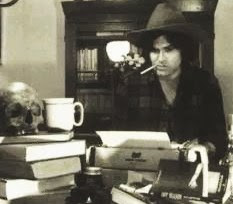 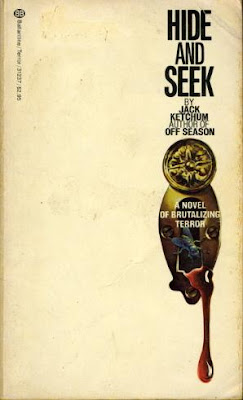 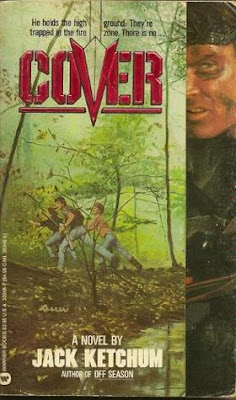 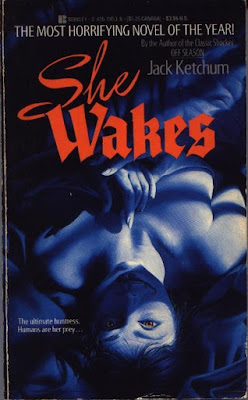 Email ThisBlogThis!Share to TwitterShare to FacebookShare to Pinterest
Labels: jack ketchum, other stuff 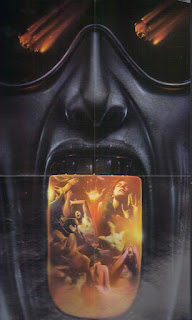 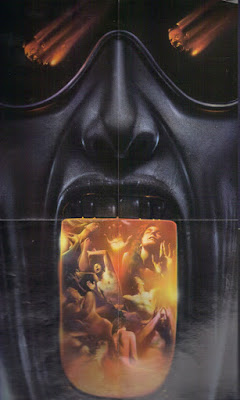 Here we go again! Peer into the vault of Fangoria's Nightmare Library reviews. (Don't worry, I've got more of my own coming...) 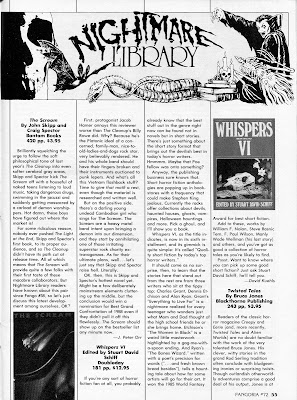 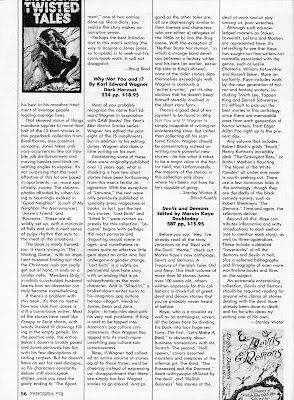 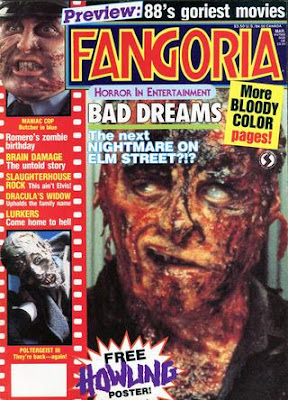