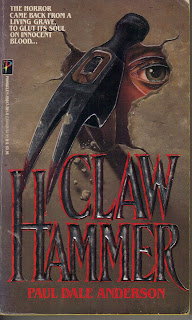 Wish I could recall how I'd heard of Claw Hammer - perhaps on a horror message board, an Amazon review, or maybe even a comment on this blog - but I'd expected a fun, gory, clever little read that I'd overlooked back in the early '90s. Filled with cliche after cliche, peopled with characters who stepped whole and cardboard from any cop show, and written in a style reminiscent of a middle-schooler's hastily-composed essay, Anderson's novel is easily the worst book I've read for Too Much Horror Fiction. There's nothing in it that the author couldn't have gleaned from any cheesy slasher flick of the '80s or "Nightline" serial killer investigation.

The hammer had severed her corpus calloseum and she was unable to coordinate the two halves of her brain. Though she recognized their questions and wanted to answer, that part of her brain which coordinates thought and speech had been irreparably damaged... On numerous occasions she'd tried to tear the flesh from her face with her fingernails, ripping and pulling as though trying to remove a Halloween mask that was glued to her skin. "It's not my face!" she wanted to scream. But the words came out of her mouth as, "How do you do? I'm pleased to meet you."

That's the sole paragraph I thought had any merit whatsoever. I shudder to recount the simple plot, which is chock full of stupid teenagers, ridiculously abusive families, and hilarious descriptions of women's lady parts. Faces get smashed with the titular instrument, bits of teeth choked on, screams die in throats, and vomit dribbles from the mouths of the people unfortunate enough to find the victims' bodies. Deformity, incest, teenage girls in bikinis, religious mania, loner cop on the case, lady pathologist with great boobs: Claw Hammer is a sad and angering example of the worst, most reductive kind of horror fiction; the kind that gives it and its fans a bad name. Anderson utilizes none of what makes the genre great: atmosphere, imagination, suspense, dread, shocking and unexpected violence, and realistic psychological depictions of people in very great danger.

Perhaps you might think I'm being too hard on what is meant to be a throwaway paperback original meant solely to waste a few hours, to give your brain a vacation... but I respect my brain much more than this "writer" does. This was only depressing - I have got to be more careful in choosing my next read! Avoid Claw Hammer at all costs.
Posted by Will Errickson at 10:30 AM

You read this based on my recommendation, right?

Oh, yes, that's right--like I said I couldn't recall how it ended up in my head, when I saw it & bought it I was thinking, How have I heard of this? Sorry I didn't like it!

Oh no, duder, please don't apologize. I think I mentioned how terrible it was to you when I mentioned it. I just happen to love/hate this book. It is the epitome of shitty horror fiction. Great review. You pretty much captured its putrid essence.

Ha, thanks. Wish I'd remembered you were recommending it as a bad book, b/c I somehow got it in my mind it was worth reading. I did however read some passages aloud to my girlfriend until she demanded I stop. I believe one chapter ends with a character actually thinking: "Who would be the next victim? And where was the killer?"