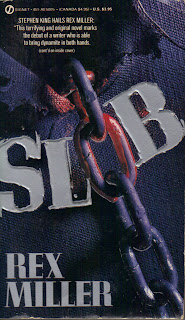 When I was in high school, a copy of Rex Miller's then brand-new debut novel Slob went around my (very) small circle of horror-fiction-fan friends rapidly and furtively, and was discussed with much glee. Can you believe this? Oh, man, that one scene! Damn, but what about--? I couldn't believe it when--! Now I don't know who first picked up this paperback original but one day it wasn't there and the next it was all we could do to not open it and keep reading during class. Let's see: The Mayor of Casterbridge, or a graphic, unrelentingly ugly pulp horror/crime novel about a rampaging homicidal psychopathic Vietnam vet and the alcoholic and aging cop who's after him?

Daniel Bunkowski is a 400-pound KILLING MACHINE. How do I know this? Because Rex Miller never stops telling you. Even in caps, he's telling you over and over how much Bunkowski, aka CHAINGANG - yes, all caps again - is an enormously obese sociopath who dreams endlessly of the foulest, most bone-crunchiest murder and mayhem. He's nearly superhuman in strength and feels little pain and no empathy nor remorse, an idiot savant (and a real whiz at snapping lengths of chain into the base of people's skulls). Discovered by the government in a maximum-security prison, the titular character is tapped to be a secret assassin in the Vietnam War. Once back in the States he simply kills. And kills. And kills again. Some authorities in that prison wondered if he was, like, the most killingest killer ever. 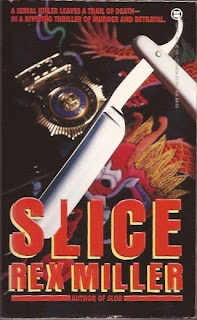 1990 sequel
Miller writes the sort of muscular yet oddly understated prose that so many crime writers who aspired to be Hemingway or Hammett affected at some point; lots of ands in long sentences that wend in and around human experience, both prosaic and profound. That's what Miller wants to sound like at least; the pages of Slob may be filled with long dense paragraphs but you can skim them because you won't find anything real; only an approximation, a litany of received cultural truths. But the book is fast-moving and gruesome, lots of graphic sex and violence both singly and together, so any weaknesses can be shot past as you try not to peek ahead to see what horrible thing comes next. 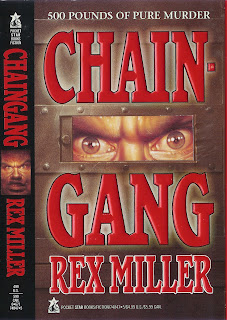 Third in series, 1992
Despicably violent, fairly readable, and at the crossroads of that grim world where crime and horror fiction meet, Slob also engendered several sequels all featuring charming Chaingang. However Miller's style and imagination have nothing on the L.A. Quartet of James Ellroy, those utterly bleak and violent and masterful crime novels which have the added bonus of being written by a master of the English language (I've written on The Black Dahlia elsewhere; it truly is more of a horror novel than many that purport to be; maybe I should include it on Too Much Horror Fiction one day). I wonder how Stephen King and Harlan Ellison, whose blurbs are all over this paperback, feel about Slob in 2010. Today I'd really only recommend Slob to completists of 1980s genre fiction.
Posted by Will Errickson at 8:50 PM

I read a synopsis for this book in the back of a Don Westlake novel--I think it was Westlake anyway--and it sounded intriguing. Sounds even more gruesome and old school than I expected. It's on the wish list at any rate.

Yeah, read this earlier this year. I'm with you on the received cultural truths, etc. Good ideas, hackneyed execution & little follow through. It felt dated in that I believe that Daniel Bunkowski would have been even more repulsive if represented in light of all that has happened in our culture since this book was written. Plus the ending was as cliched, predictable and anti-climatic as they come. This along with The Brigade by John Shirley were among the worst books I've read this year, "trash fiction" or otherwise.

Have you ever read any Comedy-Horror books?

Good question! I have a "comic horror" tag but so far only Joe Lansdale's Drive-In novels fit... But off the top of my head, I can't think of too many horror novels that are similar to, say, Re-Animator or Shaun of the Dead. There have to be!

I don't think I laughed once during THE DRIVE-IN.

Rolled my eyes, sure.

Why do books hafta be so g'dang *serious* ?

Thank you. Gonna be doing some reading soon with this one!

Hey Will,
Wow, I remember being pretty excited about SLOB when it came out with such a big push back in the '80s. You're absolutely right, for some reason, it was all the rage back then. With Miller being in the forefront of the whole "splatterpunk" movement.
I guess I must have liked what I read at the time 'cause checking back on my shelves now I see that I bought & read three more of the author's Jake Eichord series. Unfortunately, I can't remember a damned thing about any of them! Which, I believe is a pretty good indicator of their legacy.

As for your take on THE BLACK DAHLIA, I'd absolutely like to read your review. Please provide a link or reprint it here, as it's one of my top ten favorite novels of all time as well. Being the perfect merge of my two fav genres, horror & hardboiled fiction.

Thanks for your interest, bluerose!

As far as Ellroy, you can't go wrong with his earlier works like SUICIDE HILL and BLOOD ON THE MOON, somewhat rare but available in a cheap trilogy called L.A. NOIR. Ellroy's earlier stuff is raw, lean, and underappreciated.

in addition to joe r landsdale, david j schow's "where the heart was" and "jerry's kids meet wormboy" make me just about wet myself LMAOing every single time. but both of those are shorts, so maybe don't fit under the "book" criteria?

I just reread "Jerry's Kids"! Hilarious and ridiculous but weirdly captivating. You can read my review of it under BOOK OF THE DEAD. Actually I prefer Schow's non-splat work.