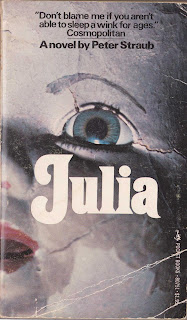 It's been some time since I read this whispery and subtle novel of a dead child who may or may not be haunting her sad, confused, dominated mother, so my recollection of it is just as hazy and diffuse. Julia was Peter Straub's third novel and his first that incorporated any kind of horror or supernatural doings. Definitely paved the way for his later novels. The accidental death of little Kate Lofting, in the bright kitchen of her family's home, is shocking, bloody, prosaic, heartbreaking. Afterward, her mother Julia, an American, spends time in a mental hospital and then abandons her English husband Magnus (all-too-obvious name) as she flies to London and purchases an old home, eager to start a new life... but is the young girl she starts to see in the mirrors her beloved Kate, or some other manifestation...? Or the child in the nearby park, whom the other children shun, is she...? 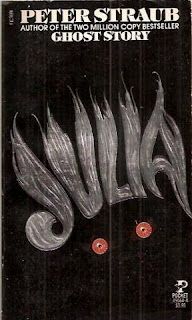 Unsurprisingly, Julia has a dreamy and indistinct feel, sort of modern Gothic, complete with a callous and cruel husband, his evil plotting sister, and their ineffectual brother to whom Julia runs to for understanding. The specter of a lost, malevolent child will feature largely in Straub's Ghost Story in just a few short years. In 1977 the novel was adapted into the little-seen (at least, I've never seen it) movie Full Circle, aka The Haunting of Julia, with, if I imagine correctly, the perfectly-cast Mia Farrow as Julia. I don't think any of these paperback images quite accurately captures the slightly hallucinatory haunting-ness quality of the novel itself, but then, that'd hardly be the first time. 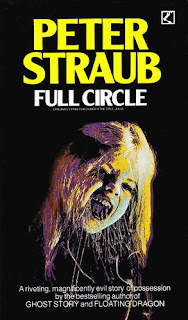 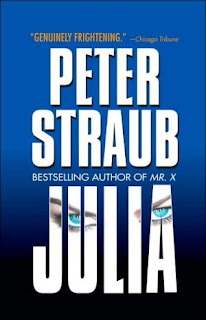 Posted by Will Errickson at 6:20 AM

You commented on my review of this book some time back, so you already know how I feel about it. But, to reiterate, reading this early novel *after* I had read so many of his more modern novels made it quite difficult for me to enjoy. Straub hadn't yet found his own distinct voice, and was thus emulating too many other, classical works to stand out from the crowd. I muddled through this one, but was angry and frustrated a good chunk of the time.

Hiya Will,
I've not had the chance to read Julia, but it sounds very tragic indeed -- I must give it a gander one of these days. I did, however, read "Ghost Story" and thought it was decent.

Have a good weekend!
Darkeva

The film version is very effective Will ! Unfortunately it's only on VHS tape ...Mia Farrow IS perfectly cast! One of my favorites. I can watch it over and over...

Well done! This post has intrigued me about this book. Would you consider Straub a genre-bender in any sense or a traditionalist?

I didn't get too specific in my "review" of this one because it's been so long since I read it, and while it had a few good moments early one, like J/Metro says above, it was a frustrating read. I haven't read enough of modern Straub to know if bending genres today, but I think he's mostly a traditionalist, or at least trying to keep the old tropes alive.

JULIA, his non-genre MARRIAGES & one other book of his whose title escapes me at the moment, are the only works of Straub's that I haven't read. I used to own a copy of that first edition paperback & recall trying to read it back in the late '70s after discovering him with IF YOU COULD SEE ME NOW & loving it, but I just couldn't get into JULIA. And don't believe I ever tried to again...

I've read all of Straub's work, and oddly Julia is one of my favorites. I'm not sure why; it just seemed to have an underlying feeling of dread to it, and it's relatively short and efficient. Some of his probably better written works tend to sprawl.

Hey man, I know I'm 2 and a half years late here lol, but I just read over this post, did a simple search, and bang, Full Circle is sitting right there on youtube. If you haven't seen the movie and want to, just google Full Circle and you shuld find it without a problem.
I haven't yet read Julia. As much as I admire Straub, I need to read him sparingly because he drains my mental energy lol. No doubt he's a superb writer. If you haven't read Floating Dragon I loved it, reminded of several King novels, mostly IT.

You're never late to a TMHF party! JULIA is pretty murky, so it's not a must-read. The movie turned up on Netflix Instant a couple years ago, so I have seen it since I posted this review. Slow, creepy parts, I love Mia Farrow from those days, "nice" horror ending, so yeah, the movie's worth a watch. And yes, FD and IT... woah.

Finished 'Julia' last night, and I loved it. Not as 'smooth' as his later work, but very enjoyable, and quite nasty. Really did set the scene for 'Ghost Story'. I have 'IYCSMN' and 'Shadowland' on the tbr pile, so one of them will be my next Straub. Keen to get stuck into the Blue Rose trilogy as well, but might try a few different authors before embarking on that journey!