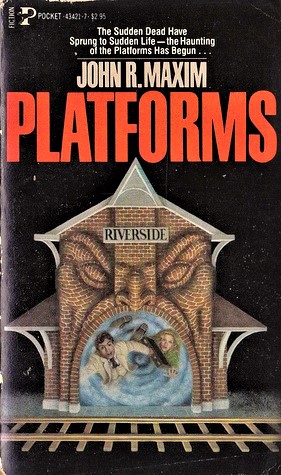 Fifty pages in, and despite my reluctance to give up on books, I had to bail on the 1980 psychic thriller Platforms, by New York-born novelist John R. Maxim. Despite the author’s well-written, thoughtful approach to matters both supernatural and not, his characters of education, intelligence, and taste, and sharp observations on marital discord and class envy, the novel is not for me. I have never been overly excited encountering psychic phenomena in horror, and only in small doses do I tolerate it. An entire story based around dead people speaking from beyond the grave about the various “levels” of the afterlife—“platforms” I’m presuming—really leaves me cold.

However, its paperback covers offer immediate pleasures for the horror art connoisseur, so let’s just be thankful for that. The uncredited illustration for the 1982 Pocket edition (at top) might be by Lisa Falkenstern, or perhaps Don Ivan Punchatz, depicting business attire-clad commuters sucked into a vortex, is a personal favorite; really great conception and execution of the ominous brick-wall face. 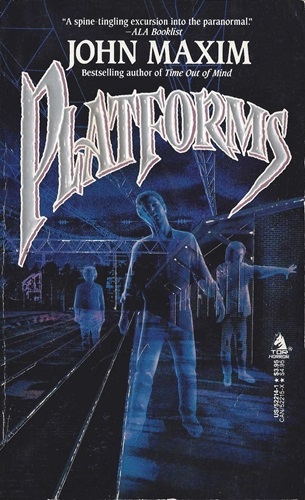 Reprinted for Tor's horror line in 1987, with J.K. Potter art, the book now boasts an eerie tableau of ghostly figures in the artist’s signature photorealistic style. Lastly we have a knockout French edition from 1989, by French artist Matthieu Blanchin. Dig those dark circles around the woman’s eyes—super unsettling! Blanchin did stellar horror covers for the J’ai Lu Épouvante line, most of which rival anything done by American counterparts of the era, I think you’ll agree... 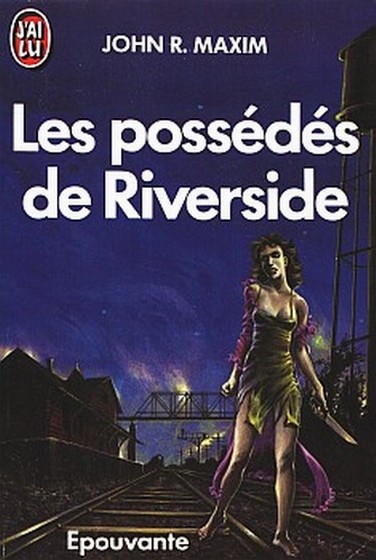 Posted by Will Errickson at 4:28 PM 2 comments: 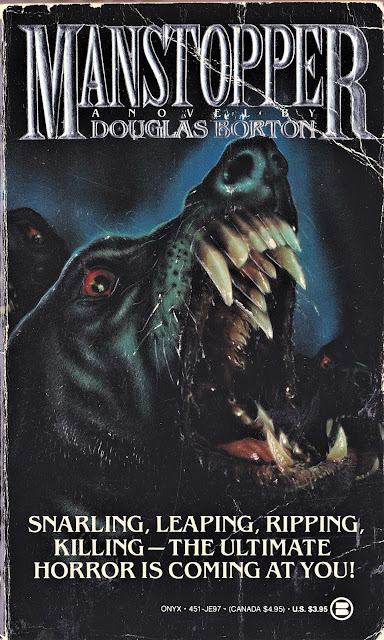 Vintage "animal attack" horror novels run a gamut in quality, from the classic to the why bother, from the pretty good to the not bad, from the so bad-it's-good to I think it's just dumb-bad—not to mention the flat-out WTF! So where does my first read of the new year, a brief novel of killer dogs on the loose called Manstopper, by Douglas Borton, fit on the list? I'm going to say between "pretty good" and "not bad." Unexpectedly tough n’ gnarly, this 1988 paperback original from Onyx/New American Library pulls no punches, and is written with a clear eye for typical suspense/horror scenarios injected with high-test potency for maximum-impact canine carnage. 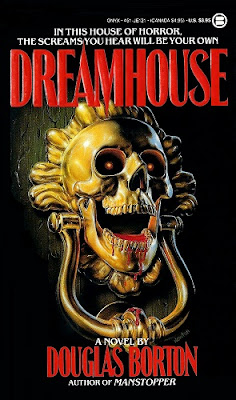 "Douglas Borton" is a pseudonym of suspense author Michael Prescott—under which Manstopper has been reprinted today—and used for four other novels, also published by Onyx
Manstopper comes ripping out of the gate, telling us what killers these trained dogs are you're about to meet, the simplest  security system, and the most perfect. These babies cost upwards of two large, but for something that cannot be reasoned with or bribed or befriended or outwitted or evaded, you know these puppies gotta be worth it. And pity poor van driver Mike Tuttle, whose cargo is four of these finely-tuned slobbering attack machines. And if that's not bad enough, Mike has the ill-considered idea to pick up a hitchhiker on this cold October night. Then things go sideways, literally even, for driver Mike as the no-shit surprise of the hitchhiker pulls a knife on him and forces him off the highway down a dirt road... The monsters now are loose: It was the morning of Tuesday, October 21, and though Sea Cove, New Jersey didn't know it yet, Halloween was coming early this year. 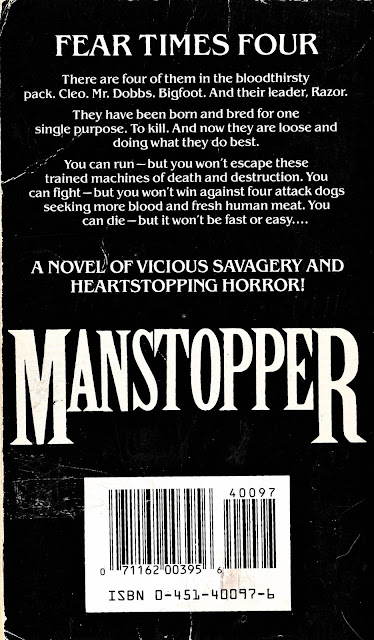 Borton next introduces our cast of characters, in the usual paperback fashion. Alex Driscoll the small-town reporter; Ben Harper the small-town sheriff; Jessica "everybody calls me Jesse" Blair the small-town love interest; the Gaines family, their headstrong little girl and her beloved little dog Buster; a psycho killer now going by the name "Mike Tuttle"; and the mysterious Karl Masterson, the man with the tragic past who trained these animals to be the finest security available. Borton does a perfectly competent job of linking the characters, describing their lives and their work, and definitely at a bit more convincing level than many other paperback horror writers. 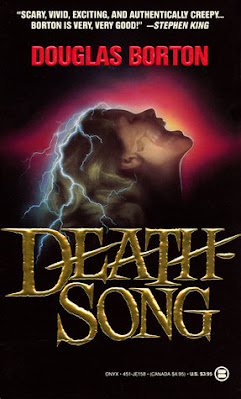 Less a horror novel, more a hard-edged thriller, Borton gets into the down-and-dirty with both fists, writing solid, if familiar, dog-attack scenes charged with adrenaline. Various characters are dispatched in stalk-and-kill set-ups that drip with dread. A woman defending her wounded husband and child offers an incredibly tense sequence, as well as a radio DJ working the overnight whose standard delivery order of a pizza-with-everything comes with an unexpected side of enraged, murderous Doberman. Called in to heel the cursed curs he trained, Masterson tells the authorities this won't be a simple task; these animals have been bred to survive at all costs:
"[Razor] places a very high value on self-preservation. He would not fight a losing battle. Against overwhelming odds, he would the first to cut and run. Not out of cowardice, but cunning. And you couldn't stop him. His reflexes are quicker than yours—or mine."
Masterson talking about the deadly, finely-honed skills of his charges reminded me of First Blood relationship between Rambo and Colonel Trautman; as I said, most often the novel reads like a thriller with some typical horror moments scattered about. Not a bad thing, but not what I was expecting. 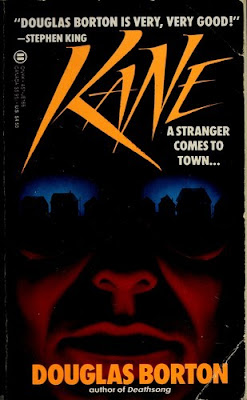 Sure, Manstopper hits bum notes, same as so many other Eighties genre paperbacks—I can do without the thought processes of horny teens, flirty grown-ups, and goggle-eyed children for the rest of my horror-reading life, while the psycho killer subplot is too conveniently slotted in to justify that "horror" tag on the spine—but provides other pleasures that offset those well-worn cliches. Borton excels at depicting animal mayhem, which is why you picked up the book in the first place, right? The chapters devoted to the dogs' point of view offer vivid, chilling glimpses of their bloodthirsty nature:
He had been trained to leap and bark and slash... Cages and walls had no reality for him. The only reality was the throbbing sense of danger and the quiet, maniacal urge to destroy....
Posted by Will Errickson at 5:26 PM 8 comments: