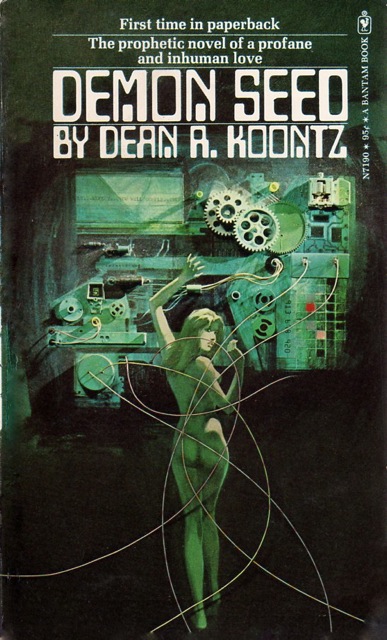 Dean R. Koontz wrote dozens of genre paperbacks throughout the 1970s and early 1980s before he became the eternal bestseller king he's been now for over 25 years. Me, I haven't read a book of his since the first Bush Administration, and even then I quickly tired of his formula after just three novels. In fact, one of his books, Midnight (1989), has what I consider one of the worst endings I've ever read in a book written by an adult man writing for adult readers: the protagonist, after defeating some sort of science-gone-wrong evil, barges into his estranged teenage son's bedroom and proceeds to smash all his heavy metal records (revised to CDs, in the paperback reprints in the ensuing years), then forces him into an embrace. All's well that ends well, amirite? Man, as a teenage Jersey metalhead, I was all like "Fuck. You." to Mr. Koontz. Still: he got some pretty decent vintage covers, even for his various pseudonyms - Demon Seed (Bantam 1973, art by Lou Feck) and The Flesh in the Furnace (1972) definitely the high points. 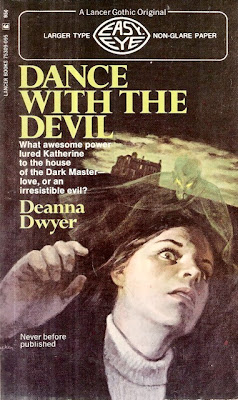 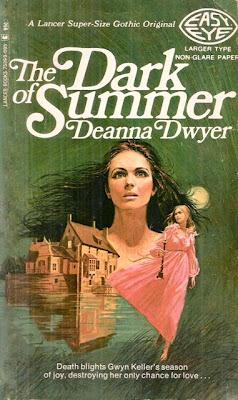 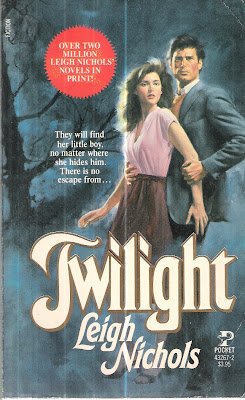 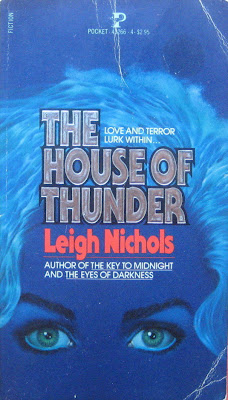 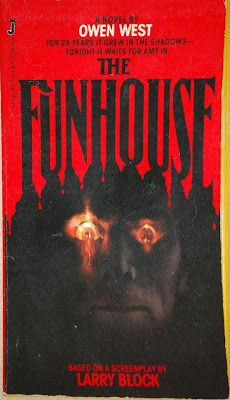 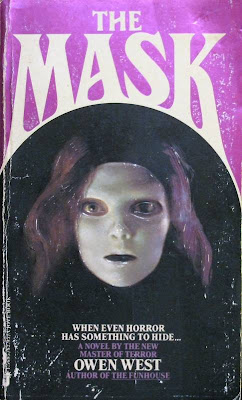 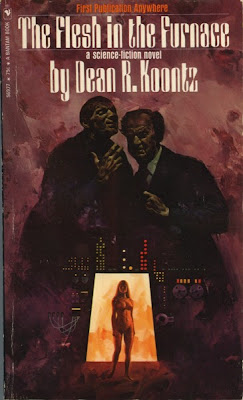 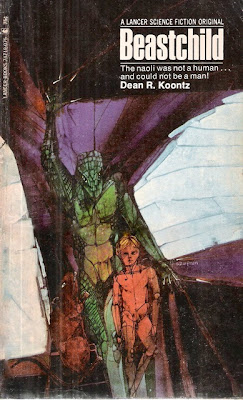 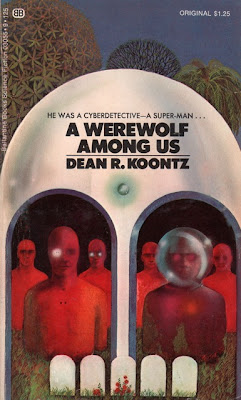 Dean Koontz has a lot of WTF moments in his books. At the same time he's written a lot that I have enjoyed. Servants of Twilight, Intensity, and Funhouse (as Owen West)all come to mind. When I used to do my laundry at the laundrymat I would often have one of his books with me. It was usually a toss up between him or Barbara Michael for laundry day fare. I could usually have the books done by the time the drying was over and I never felt bad leaving the books behind to share with my neighbors.

I might pick up Midnight now just to read that crazy ending.

I just haven't enjoyed Heavy Metal as much now that its no longer dangerous...

I’ve read a couple of his novels. Koontz have an effective formula, without doubt. Before I read “Watchers”, my iniciation with Dean Koontz, I thought he was the shadow of Steve King. That guy is a writing machine and his long list of best-sellers makes me doubt of his quality. He says that he is not a horror writer. That makes me feel sad. I hate when writers deny the genre.
His vision about horror is a little boring. The Good everytime wins. He said that “too much horror is inhuman; my vision of people and future is very optimist.” And it is true. I’ve heard that all of his endings are happy.
I know that he have very good stories. “Watchers” was great. I recommend it if somebody want to read Koontz for first time. But “Phantoms” was bad, bad, bad. Is the kind of story write in the correct way, but fake. You feel that there isn’t honestly. And the movie, with Ben Afflek, is shit. When I was seeing it I fell asleep and I never sleep with a horror movie, is a sacrilege!
I reviewed this two novels in my blog and I have four more waiting in my bookcase. In my country, his books are very cheap. Even you can find them on the streets.

Seriously. It runs in his family and I think he caught it. He has the weirdest writing regimen I've ever heard of -- he writes a page, then re-writes it a bunch of times before he goes on to the next page. Writers should go through rough drafts... but not page-by-page! He's also written several books under the identity of his dog.

He also believes some very bizarre things. The ridiculous heavy-metal-is-bad ending (which always reminds me of the Quincy "punk rock" episode for some reason) is pretty typical.

I read him for a while back in the early 80's but got tired of his formula (and his weirdnesses) pretty quickly. Some of his stuff was really good (I liked the Brian Coffey _Voice of the Night_ book a lot - it's a nice little book). I really bailed off of him when he got that ridiculous-looking hair transplant. He was a dignified-lookin' balding guy, but now he looks like some refugee Beatle. Very strange...

Yeah, I never really got into Dean Koontz at all, with the exception of a short story I read a few years ago in a Halloween anthology. He just came off as just too formulaic, even though Harlen Ellison swore by him. Got a winning formula so I'll grant him that.

I am wondering of that quasi Quincy "punk rock" ending(I remember that episode as well) is indicative of his politics, which seem to be quite conservative. That is never an indication of whether or not an author is "good" to me, but it is always interesting to see their baggage...

Heavy Metal? He wrote a novel where this hippy girl wants to give birth to the next 'Bob Dylan' and spawns a telekinetic monster who gouges peoples eyes out and morphs into the creature from Alien to kill tramps (I'm honestly not inventing that! It's called Dragon Tears)

Still enjoyed it though! Anyway, thanks for sharing the covers. The 70s must have been some decade if even Dean R was funky.

Dragon Tears was the end of it for me with Dean Koontz.

I read everything he'd written up to that point. I enjoyed his early work like NIGHT CHILLS, TWILIGHT EYES, WATCHERS, and PHANTOMS.

But after THE BAD PLACE, he went down hill quickly.

I may try is Frankenstein books. Some very well read friends of mine tell me they are quite good.

Midnight was the second Koontz novel I read. It killed any interest I had in reading another word by him, a consequence in large part of that very scene.

I can say with (oh, to be fair almost) 100% conviction that I will never review a Koontz novel! He plays virtually no part in the horror fiction I want to remember and to celebrate.

^That's a shame. Whether you like him or not, and I'm far more on the side of finding him pedantic and formulaic than I am for liking him; but...his output is important in the grand-scheme of the genre, especially for those of us who grew up with him on the racks.

Every now and then, he's got some horror magic working. Winter's Moon I remember being pleasantly chilled by, but his short story "Hardshell" is a minor gem. Find it in Predators by Gorman, Greenberg or, preferably, Night Visions 4.

It's true he loomed large in '80s and '90s horror, but I feel he's only important in the genre for being a bestselling brand-name. Same for John Saul with me. Plus, their paperback covers of that era pretty much sucked, so they don't even have that going for 'em!

I liked "Phantoms" as a book, although I didn't like the movie either.

I think Whispers, Intensity, and The Servants of Twilight worked pretty well though as movies.

Dragon Tears was pretty good, although you might be mixing part of "Midnight" into your description.

It's about a guy who projects his consciousness into bodies formed from dirt and can freeze time.

Even Harlan Ellison doesn't seem to be that big a fan of Dean Koontz. Ellison once described Koontz's style as "Look, ma, see how pretty I can write!"

You should actually read "Twilight." It's good.

I've been trying to read "The House of Thunder," but a romance between the main character and her doctor is killing the story's momentum. Good premise, though.