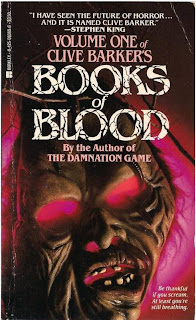 The first volume in Clive Barker's genre-redefining short story collection Books of Blood was published in Great Britain in November 1984 by Sphere Books. By the time the series reached the States, published by Berkley Books in 1986, the paperback covers were emblazoned with the famous Stephen King quote (by way of what someone famously said of Bruce Springsteen): "I have seen the future of horror, and its name is Clive Barker." King, enthusiastic master of the glad-handing blurb, was here absolutely correct. And while the back-lit rubber Halloween mask barely distinguished it from heaps of other horror fiction paperback originals then on the shelves, it was the King quote and the confident, prominent possessive of Barker's name on the cover that prompted me to pick the books up in January 1987 (I've been dating my books for a long time). 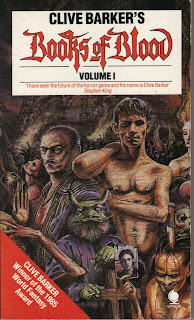 Books of Blood are Barker's gruesome twist on Ray Bradbury's fantasy classic The Illustrated Man, in which that book's stories are tattooed on an itinerant man's body. Here, the title story is of a young man, a psychic phony who accompanies a parapsychologist on an investigation, accosted at a "crossroads of the dead" by the ghosts of those who have died - and killed - violently. The dead then carve their stories directly into his skin: Even through the blood she could discern the meticulous way that the words had harrowed into him.... 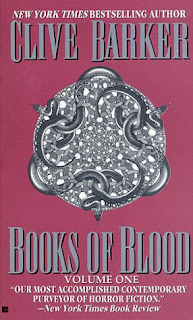 She saw plainly that the highways that crossed at Tollington Place were not common thoroughfares. She was not staring at the happy, idling traffic of the ordinary dead. No, that house opened onto a route walked only by the victims and the perpetrators of violence. The men, the women, the children who had died enduring all the pains nerves had wit to muster, with their minds branded by the circumstances of their deaths. Eloquent beyond words, their eyes spoke their agonies, their ghost bodies still bearing the wounds that had killed them. She could also see, mingling freely with the innocents, their slaughterers and tormentors. These monsters, frenzied, mush-minded bloodletters, peeked through into the world: nonesuch creatures, unspoken, forbidden miracles of our species, chattering and howling their Jabberwocky. 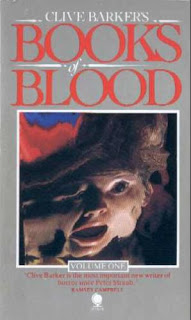 It's lovely stuff, is it not? Before he was famous for being a horror writer, Barker was a playwright, and his mind's eye was well-trained for sights both unseen and unimagined. The other short stories in this first volume include the deathly erotic "Sex, Death, and Starshine," in which a theater troupe carries on even after the final curtain; "The Midnight Meat Train," an unapologetically outright blood-and-guts splatterpunker of a butcher and those he serves; the drily witty "The Yattering and Jack" is the comic anomaly of the entire series, as a seemingly oblivious man and a minor demon face off; and "In the Hills, the Cities," perhaps Clive Barker's most enigmatic, visionary, and original short story, one of men and women and the cities that they make. Each is essential for the horror fiction fan, new or old, glittering with the author's wit and irony and fearlessness. 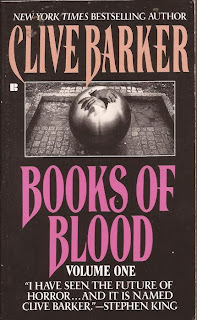 Numerous editions of this now-classic collection have been published over the past quarter-century. Isn't it obvious that Barker's own illustration for the cover, second illustration down, is the most exciting, intriguing, and indeed accurate one? I can only assume it was considered "too much" for American audiences. And look closely, for one of the damned presents to the potential book buyer a charming black-and-white photograph of the all-too-youthful-looking author; might we guess that somewhere on that highway of the dead, a demon possessed a certain soul? 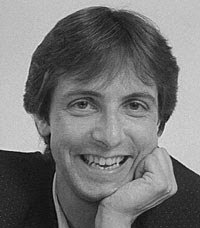 He has such sights to show you!
Posted by Will Errickson at 5:20 PM

A really phenomenal collection. At times I can be a bit lazy in finishing an anthology, but I blew through Barker's collection like it was going out of style. It made me wince and cringe, but God was I fascinated. The imagery in stories like "Midnight Meat Train" and "In The Hills, The Cities" keeps haunting your memory for a while. Truly one of the greats. Thanks for bringing back memories... and that first cover is completely kick ass.

Wow, time really took a bat to Clive Barker, dinnit? Last time I saw him (on Bravo's 100 Scariest Movie Moments), his voice was all shot to hell and he looked like he was trying to pass a gallstone. By-the-way, I happen to have those wonderfully crappy monster mask paperback versions of the first three Books of Blood. Son of Celluloid was my favorite tale.

He seemed to beat the devil until about 5 or so years ago, then it all caught up with him. I think it was the cigars and Scotch. I met him in '91 and he weighed about 120 pounds soaking wet. Then he got all LA hardbody! I heard he's had throat surgery and he's OK now but he's lost that loverly Liverpudlian lilt. Alas. "Son of Celluloid" was the very first story I read of his--now that I recall, the first Book of Blood I bought was Vol. 3--and I can still recall how very English I felt his writing was. Pivotal, pivotal artist in the field.

Joe, thanks again--glad this was a good flashback for ya. I only had to reread a page or two for it all to come back to me.

Yeah, I got the mask one. Love the cover art for THE HELLBOUND HEART, tho.

In somewhat, kinda, related news, I just signed up for a 'masters' class on adapting Lovecraft put on by Stuart Gordon and Dennis Paoli.

It's part of the Fantasia Film Festival.

Barker looks ecstatically perky in that pic. Books of Blood really rocked me on that first reading. I think I still have an illustrated version of Son of Celluloid kicking around here somewhere. It has a lovely gored-up picture of Marilyn Monroe on the cover.

I've got the first three volumes in some Book of the Month edition. Not a pretty book, but it's the stories that count. And the stories within that first volume really pack a punch. One of my very favorite collections.

"Midnight Meat Train" is one of the best.

I literally laughed out laud upon seeing that picture of Barker — "he has such sights to show you."

That's totally something a cenobite would say. Awesome.