The Auctioneer by Joan Samson (1975): When the Man Comes Around

One of the most compulsively readable books I've come across for Too Much Horror Fiction, Joan Samson's only novel The Auctioneer (Avon, Jan 1977) is a virtually unheard-of work from mid-1970s bestseller-dom, the kind of old paperback you'd overlook at a flea market or used bookstore. The first time I heard of it was literally two or three weeks ago, when I was reading some background on The Other. Someone referred to Samson's book as an undeservedly forgotten, minor classic of quiet, unassuming horror comparable to Thomas Tryon's earlier novel, and that was it; I had to have it. Didn't take me long to find it at all, and even less time to read it. It's worth keeping an eye out for, and plenty of copies are on eBay and Amazon for cheap. 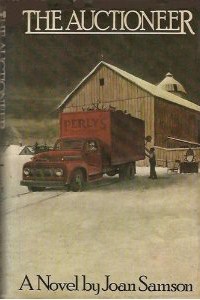 Arriving in the New England country town of Harlowe that has changed little in decades, the auctioneer is Perly Dunsmore, a smiling, confident stranger bearing not gifts but the desire to receive them, given gratis by the good people of this farming community. As the crimes of the 20th century start to seep into Harlowe, Dunsmore convinces the town's only policeman that deputies are needed, and in order to gather deputies, there needs to be an auction to raise money, perhaps even enough to procure an ambulance for Harlowe. We see all this through the eyes of the Moores, a proud family who unwittingly start the whole thing off by giving unused items from around their farm to be auctioned off: first some old wheels, then a buffet table, an old sink, unused tools... 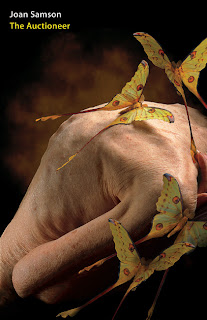 But Samson makes an interesting decision by keeping Dunsmore off-stage, as it were, for large portions of the novel, and we hear of his doings through Bob Gore, the policeman, as he relates them to John and Mim Moore and John's invalid mother. And when Dunsmore finally does make an appearance, he is charming, deferential, and polite, when the Moores see him in action doing his auctioneer's spiel. To the city folks who come to the auction he spins a lovely fable of country life, flattering the townspeople for their good Christian virtues as well as the people who wish to capture some of it. But each and every Thursday, Gore and Dunsmore arrive at the Moore farm, as well as everyone else's homes, quietly demanding something for free. The Moores give at first with no thought, for, as Mim says to their four-year-old daughter Hildie, "It's nothin' to do with us. Nothin' at all." 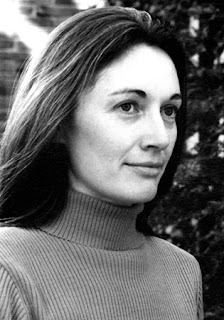 Samson, who sadly died of cancer shortly after the publication of this, her only novel, has a way with drawing you into the landscape of the Moores' lives and letting you feel their growing unease and quiet helplessness as the auctions increase. You get the sense it just wouldn't be neighborly to refuse Dunsmore. Who doesn't want to do good for Harlowe, Dunsmore reminds them, even as he seems to cast a spell over many of the right-thinking men in town as he deputizes them. Mim's words are so ironic it becomes more and more painful as the story goes on. This has everything to do with them. 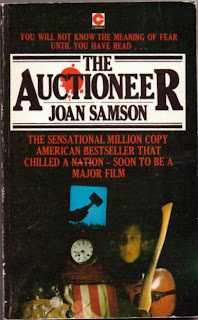 Because, of course, after awhile some of those deputies - men the Moores have known all their lives - start showing up for castoff items. And this time they come armed. And they don't take castoff items anymore but property that has meaning and value to the Moores. And those in Harlowe that don't give freely? Certain accidents start being reported. A car crash. A shooting. A missing child. And the accidents always somehow get mentioned when John Moore tells Dunsmore and his deputies that no, this time is the last time, he has nothing left to give. But he does. He realizes he may have more to give than he'd ever thought.

Simply and strongly told, it's the kind of book you don't want to stop reading because there is such a sense of place and time and character and most of all, story. The Auctioneer unfolds slowly, with the tiniest hint of menace, with the seeds of destruction sown in the very first pages. Even with its unobtrusive sociopolitical allegory - which I can take or leave - this is a mainstream thriller that actually thrills, while touching on the brutal and uncomfortable fact that some victims give themselves piece by piece, bit by bit, to their tormentors, all the while refusing to see their complicity in their own inevitable doom.
Posted by Will Errickson at 3:44 PM

Will, thank you for the write-up on this novel. I read it for the first time, as a hand-me-down novel from my mom, back in the mid-'70s when it first came out and I was in Junior High. Its disturbing nature stayed with me from then on, for reasons that I don't quite know, but so much so that I was driven to look for it again, many years later: thank God for eBay! I was able to purchase another copy, which I immediately re-read upon receiving it. My take on it, though (with apologies to those of differing political views), was as a political allegory, and I think that is why it stuck with me all those years: it seemed to me a most frightening parable about the encroachment of government (well-intentioned at first, isn't it always?) but becoming so pervasive that it robbed people of their freedom until they finally broke the spell, rose up against the monster, and took their town back. I can almost feel Joan Samson channeling a bit of Ayn Rand... But it really had an impact on me, and I've recommended it to friends of mine in politics here in D.C. Well, thanks again for your blog: I was wondering why Joan Samson (sadly) did not write anymore, and I'm also sad that her novel wasn't made into a movie as promised by the paperback cover...

If it's a political allegory at all (and I think it is), it's an allegory of the dangers of fascism. The auctioneer is able to play on the town's fears of the outside world (crime, especially), play to the town's sense of history and community, recruit the thugs and bad folk to his side, while the well-intentioned do nothing. Samson must have read Thomas Mann's "Mario and the Magician" (another allegory of the allure of a fascist con-man who seduces his audience).

One of my favorite books of all time. It is unrelenting and horrific in a very realistic way. So well written. Villain is one of the best ever!

I agree, Phantom! It's definitely one of my faves that I've found for this blog. I hope more people get around to reading it; it's easily found on Amazon and eBay.

I just finished this book about five minutes ago and found your blog as a result of it. Easily one of the most well written books I've ever read. Thanks for having such a badass site.

Cool, tiny, thanks for stopping by. There is just something uniquely captivating about this novel... I sincerely hope more people discover it!

Have just read this having seen your review and I did enjoy it. 3 out of 5 I'd say, with a strong ending. I was struck by the similarities between 'The Auctioneer' and 'Crawlspace' which has also been featured on TMHF. (Isolated farm house, isolated rural town, creeping sense of dread etc etc) At times it moved too slowly for me. One too many scenes in which the central characters debate their next move. But overall, I thought it was good, so thanks for the recommendation.

Glad to hear you enjoyed 'em, Charles! As for the slow-moving aspect, for some reason I feel like that's an early-'70s style kinda thing, that mainstream novels were for readers who wanted to sink into the story for awhile and not simply race to the finish line.

Just curious what everyone thought of the political undercurrents to this one. I loved the book by the way but found its political leanings well curious. Definitely a story about the threat to the individual by the collective. Yes, there's a demagogue but he's taking from individuals to provide services to the community. I don't know it's kind of hard to pin down the ideology at work here. Someone mentioned ayn Rand above and I would agree. None of that takes away from it being a superb novel very well written.

I read this book when it came out, and found it more than a little disturbing. I have thought about it on and off for years, and think it particularly apt at this time. The book is mesmeric, and beautifully written. (It is time to read it again.)