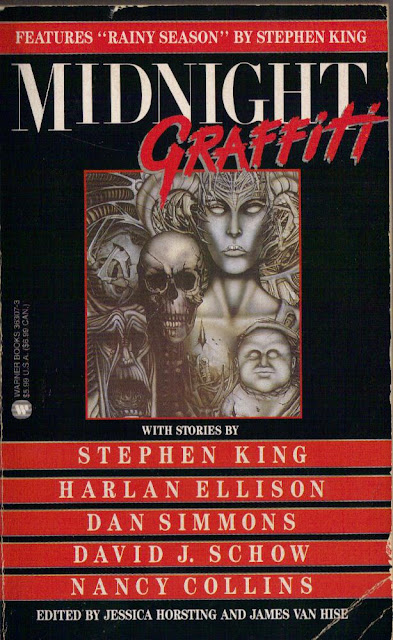 Something new for Too Much Horror Fiction: guest blogger (& girlfriend extraordinaire) Ashley Louise!

I especially love horror in short story form, so I was delighted to find a new collection - and thrilled to find it so gratifying. Midnight Graffiti (Warner Books, Oct 1992) is an engaging anthology from the now-defunct magazine of the same name from the late '80s. It specialized in all kinds of horror and weird fantasy fiction from authors both new and established. 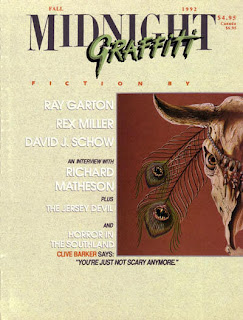 I will give reasonable warning that the biggest difference with this collection from others I have read is the editing. I would prefer to be almost entirely unaware of the editor's existence, and allow their selections to speak for themselves. Unfortunately, Jessica Horsting will not shut up. She opens the anthology with an eight-page introduction, smugly explaining to her readers every obvious, bromidic reason that people are fascinated by horror. Further, Horsting attempts to flatter each author with an introductory bio, but just comes off overly congratulatory and all too chummy. It is painful. I can think of positively no reason for any collection to have twenty-four introductions written by one person. What immediately springs to mind is how much more charming it would have been to ask each of the authors to write their own short bio. Ah well, tant pis.  Irksome editor aside, this is one of the better horror anthologies I have read. 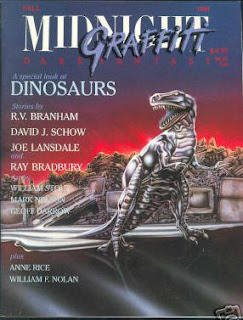 David J. Schow expectedly leaves you green around the gills with "Bad Guy Hats"; J. Michael Straczynski's "Say Hello, Mister Quigley" is simultaneously disturbing and heartwarming; Joe Lansdale's "Bob the Dinosaur Goes to Disneyland" is a fun and clever satire, though not at all horror; "Blue on One End, Yellow on the Other" by K.W. Jeter is a heartbreaking insight into mental illness and addiction.  I had heard about Steven R. Boyett's "Emerald City Blues" - shocking! disturbing! Nah, just grown up Wizard of Oz. I found it to be a bit underdone. It did have a great line, jauntily poking fun at military/old man lingo:  Goldilocks was SAC - Strategic Air Command - headquarters in Omaha, Nebraska; ETA was Estimated Time of Arrival. It was fun to think up names to go with important things. Ha. 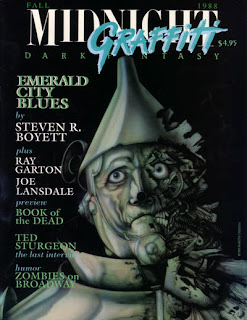 The celebrity authors contribute varying stories. Stephen King's "Rainy Season" is passable, but classic King filler; Neil Gaiman impresses as always - perhaps more so alongside some of the less experienced authors included in this collection. The mighty Harlan Ellison predictably thrills me with his anecdotes, and Dan Simmons - oh my. His award-winning short story "The River Styx Runs Upstream" is easily one of my favorite short stories, ever. Mother never blinked. At first I didn't notice; but then I began to feel uncomfortable when I saw that she never blinked. But it didn't make me love her any less. 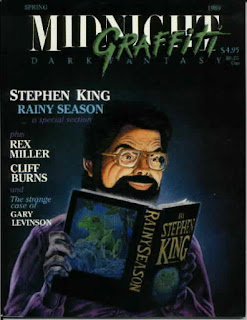 Gil Lamont and R.V. Branham were truly the surprise gems. Lamont's "Sinus Fiction" was evocative of Simmons's 1990 science fiction masterpiece Hyperion - almost difficult to picture in its stark originality. He is an editor, and seems to have written only one book, The Great Mildew Creek Harlot Massacre - erotic fiction, and only a few copies to be found, all for more than $30 US. Huh. Branham's first of two stories in this anthology, "The New Order: 3 Moral Fictions," was remarkable, and I would love to see it expanded into a novel. Sadly, he seems to have written just one book I can find - on cursing in a profusion of languages. 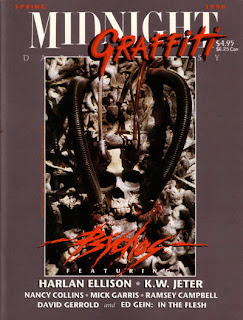 As with any collection, there are the middling stories. Among those I found to be particularly unreadable: "The Domino Man," "Salvation," and most of all, "Rant" by Nancy A. Collins. The final story, "Dark Embrace," comes from (mercifully silent) co-editor James Van Hise and is an adroit, if somewhat predictable, story of a boy who is forced to mature with cruel haste. It provides a fulfilling ending to a diverse and appealing collection.  As horror short story collections go, this one is a stand-out. It has just enough timeless and affecting stories to put it ahead of many other collections. I am pleased to say it is just what I was hoping for - and more. Unfortunately, the cover... meh. Nice stock photo or even Giger ripoff, I guess.

Thanks again to our special guest blogger, Ms. A. Louise. In the meantime, Will Errickson has begun a 600-page horror novel by a real writer so it might be a minute or two before he gets back.
Posted by Will Errickson at 9:00 PM