Progeny of the Adder by Leslie Whitten (1965): Dracula Gets a Sun Tan 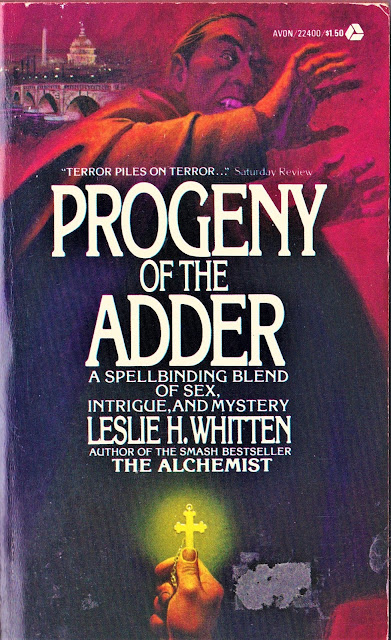 Throughout the entirety of Progeny of the Adder, Det. Harry Picard of Washington, D.C. is on the trail of a homicidal maniac that Picard thinks is psychologically damaged enough to believe himself a vampire. Those readers who read the 1975 Avon paperback edition of this novel will know that actually, Picard is after a real vampire, and are one step ahead and simply turning the pages waiting for the full reveal. And one step ahead is not where any self-respecting mystery novelist should want his readers to be. Perhaps the reader who read the book in its hardcover edition would have been more intrigued by the murders and their clues, and astonished at the climax, since the cover doesn't give it away. Oh well, it's not Leslie Whitten's fault somebody stuck a stylized painting of Dracula on the paperback cover of his by-then 10-year-old book. 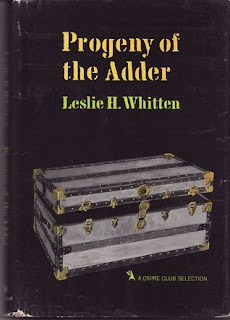 Whitten has written a fairly standard, yet highly readable, police procedural with a very slight touch of supernatural horror in the guise of Sebastien Paulier. A black-clad, detestable-smelling and vastly powerful Englishman who is Picard's main suspect in a series of murders, he's described by one witness as "Dracula with a sun tan." Heh. Picard, young but already weary, is assigned the case after several "professional" women are found in the Potomac River with their throats torn out and bled dry. After the daughter of a prominent dignitary official visiting DC is found dead, Picard's fellow detective, divorcée Suzanne Finnerton, is tapped to go undercover as a streetwalker to tempt the killer from his lair. Place romantic subplot here. 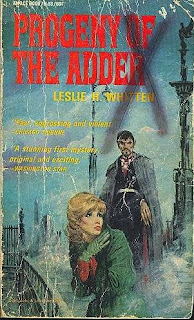 I did learn something pretty cool from Progeny of the Adder. One of my favorite cliches of horror/mystery fiction is the research endeavor. Here Picard trudges to the Library of Congress and researches vampire lore; later he reads a detailed foreign report on Paulier's whereabouts before his arrival in DC. He had run a plantation in the Malay Peninsula, and was referred to by his terrified workers there as being like a pennanggalan. I had never heard of this folklore monster before: an undead creature composed solely of head, stomach, and entrails, which flies about sating itself on the blood of newborns. Those with babies in their homes are advised to hang thorns all about, for the pennanggalan fears catchings its guts on them. That is awesome.

If you're of an age where you started thinking this sounds quite a bit like "The Night Stalker," the early-'70s fad phenomenon TV movie/series with Darren McGavin as a rumpled cop on the lookout for all sorts of eerie occult goings-on, you'd not be wrong; this novel predates "Night Stalker" by well over five years and probably served as an inspiration. Whitten's clear and no-nonsense prose style seems a prelude also to 'Salem's Lot as well. A wonderfully-done confrontation between Paulier and Picard and his fellow cops in a creepy abandoned old farmhouse reminded me of the climax of King's classic vampire novel. As for the allusive title, at first I thought it might be an obscure biblical reference, or perhaps Shakespeare; I was quite well chuffed to find it a line from perhaps my favorite poet, Charles Baudelaire, in his poem "Burial":


If on a night that's close and hot
Some Christian, out of decency,Down where the tombstones crack and rot
Buries your corpse, your vanity
There where the stars have chastely set
Shutting their eyelids leadenly
The spider will spin her fatal net
The adder spawn her progeny.
Posted by Will Errickson at 2:20 PM

I love paranormal detective stories, or just any story that combines crime and the supernatural. This seems like an interesting read solidly in that mold. I started thinking of Kolchak the minute I read this like you said. I unashamedly love that show to death so I think I could definitely dig this one. Thanks for pointing it out!

That Pennanggalan myth is presumably the same one that served as inspiration for the utterly beserk movie "Mystics In Bali"... apparently it's quite a common trope in Indonesian folklore/culture, but I'm not really qualified to comment on that.

Love that scan of the older paperback cover with the big X scrawled on the front btw!

If I'm not mistaken, Witten actually translated a volume of Baudelaire's poetry. He definitely seems to have had an affinity for the man and, according to Wikipedia, he may have had poetic aspirations himself. I'm gonna have to check out Progeny of the Adder, as well as Moon of the Wolf.

Will - Your blog & postings on Facebook have done wonders for my vintage genre paperback collection & it's subset, all those great TV & movie horror film tie ins from the late '60s up through to about the mid '80s.
As I'm sure I've told you previously, I've always had a nice collection of them both from having bought many of them back when they were originally published, but I'd never really given much thought to actually hunting for more of them at used bookshops & online.
That is until I happened upon your site back in '09 & was properly inspired. Now, I think they've actually become the collectibles that I have the most fun with & get the most satisfaction from. It's great.
And, last week, here at a little bookshop in Niagara Falls, I found a copy of the PROGENY OF THE ADDER paperback from '75 in really nice shape. Also, a fairly decent copy of the DAMIEN: THE OMEN II movie tie in which must be rather scarce or something because everyone online has it priced around $45. Crazy, I got it for 50 cents. LOL

Fans of the detective/supernatural cross-genre might want to take a glance at my Chronological Bibliography of Early Occult Detectives. I've traced this character type back to 1855 (and I end with Seabury Quinn's Jules de Grandin in 1925).

Just picked up a copy of this today in downtown LA's fine "The Last Bookstore." Looking forward to digging into it.