The Sundial by Shirley Jackson (1958): When Shall We Live? 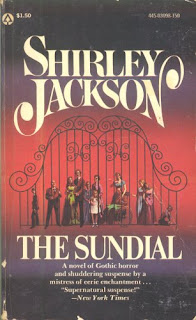 Calling Shirley Jackson a horror writer is inaccurate, but her style of thrusting disparate groups of people into unpleasant and bizarre situations seems to warrant it. Her emphasis on the psychological effects of imposing family homes with grim histories, as in her classics The Haunting of Hill House and We Have Always Lived in the Castle, places her firmly in the Gothic tradition. The Sundial, Jackson's fourth novel, is an enigmatic work about the Hallorans. Ensconced in the family estate, they come to believe, based on the fevered imaginings of a spinster aunt, that the world is literally ending. 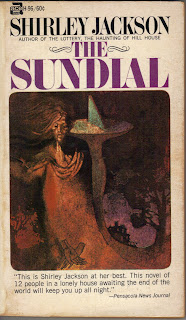 The novel begins as the family returns from the funeral of Lionel Halloran, the son of the home's owners. Immediately the accusation is quietly made that Lionel's mother, the stately and authoritative Orianna Halloran, pushed her own son down the great stairs. One day soon after, Aunt Fanny, the sister of Lionel's father, gets lost in the vast gardens surrounding the estate and there envisions her own father - Lionel's grandfather, the man who had the house built - telling her From the sky and from the ground and from the sea there is danger; tell them in the house. There will be black fire and red water and the earth turning and screaming... the father comes to his children and tells them there is danger. 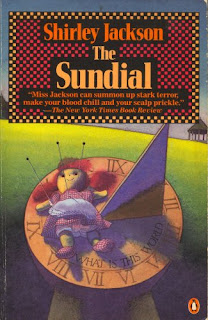 Orianna takes this to heart but slowly usurps Aunt Fanny's authority of revelation and writes up rules for the new world. Only the 12 people who come to live at the house are to be part of the new world; the villagers down below? Not so much. As per Jackson, matters of identity and social role predominate. Characters invert their expected personalities: widow Maryjane Halloran never grieves for Lionel; the child Fancy Halloran becomes wise and almost mocking of her elders; Essex, hired to catalog the vast library, ends up burning it bit by bit; governess Miss Ogilvie, told to refrain from giving up the secret of apocalypse, ends up telling the young counterman in the village's five-and-dime (who tells his fundie mother, which leads to a blackly hilarious confrontation between two end-times groups).

The young daughter of Mrs. Willow, an old friend of Orianna's, attempts to leave and has a humiliating and disturbing experience with the driver of the car Orianna hires to drive her into town (easily my favorite sequence in the novel). The Hallorans deign to hold a party for the oft-disparaged villagers the night before the end of the world. What follows then is a brittle and brutal comedy of upper-class manners. 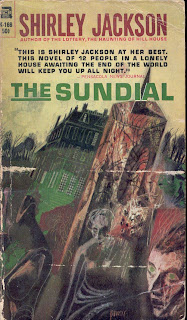 With Jackson's arid wit and merciless tone, The Sundial plays out almost like a morality play or fable, albeit one without an actual moral to be learned. WHAT IS THIS WORLD? states the engraving on the title object, as old Mr. Halloran was fond of strange epigrams of the Dale Carnegie sort; however the epigrams engraved throughout the house were done by a rather literary sort so instead of the banalities of Carnegie there is the confusing and ironic enigma of WHEN SHALL WE LIVE IF NOT NOW?

Readers may feel a bit like Aunt Fanny when she cannot find her way out of the topiary maze (just like the one Kubrick added to The Shining), feeling like the answer is around the next bend, but Jackson refuses to play that game. When the end comes there is neither bang nor whimper; there is only a cast of ugly and foolish characters who think the sun shines on them alone.
Posted by Will Errickson at 3:45 PM

Great book! I need to read this again. I just picked up We Have Always Lived in the Castle which is also totally brilliant.

I loved The Haunting of Hillhouse. I'll have to look for this one too. Thanks for the review.

Ooh, I need to read this. We Have Always Lived in the Castle is fantastic... I hear there's going to be a movie soon (?).

Really? I know it's been a musical...

Hmmm. Me likey. I'll have to throw this up on the wish list. I've only read Jackson's short fiction, but I've had no complaints yet. Also keeping an eye out for Hill House.

What a great review. I'm so overdue to read more Jackson, and a write-up like this is really helpful. Thanks! (Great array of covers, too!)

Hooooly hell, this is a tough one to come by, it looks like...used copies start at $70 on Amazon, and it's not in her recent New American Library collection either - a real drag, I became quite taken with Mrs. Jackson after reading your post on "Lived in the Castle." Something to wish for I guess!

I had no idea, Scott... got my copy at a used bookstore for cheap. Keep looking, I'm sure t'll turn up eventually!

It's available on Audible as an audiobook if all else fails