Songs of a Dead Dreamer by Thomas Ligotti (1985): Fascinating to Observe What the Mirror Does

But stories, even very nasty ones, are traditionally considered more satisfying than reality - which, as we all know, is a grossly overrated affair.

The reclusive Thomas Ligotti writes hermetic, maddeningly quiet and exotically bizarre short stories populated by professors, physicians, poets and painters who slowly but surely find that the universe is fractured, unknowable, and ravenous. His 1985 collection Songs of a Dead Dreamer contains rich, dense stories with titles like "Les Fleurs," "Drink to Me Only with Labyrinthine Eyes," "Dr. Locrian's Asylum," and "The Chymist," which reveal a baroque and decadent view of reality twisted and askew just so. Speculates the narrator of "The Sect of the Idiot":


To suffer a solitary madness seems the joy of paradise when compared to the extraordinary condition in which one's own madness merely echoes that of the world outside... 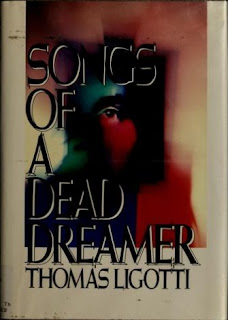 Many of Ligotti's protagonists go almost willingly into this madness, to the edge of the world where an endless ribbon of road continues into space by itself, as the drunken children's book author of "Alice's Last Adventure" puts it while she ponders the identity of her most famous storybook character. Ligotti also displays a charmingly creepy self-referential tendency in "Professor Nobody's Little Lectures on Supernatural Horror" and "Notes on the Writing of Horror." I've always been a sucker for the horror story that is also about horror fiction.

The cover blurb about shelving this work between Poe and Lovecraft certainly piqued my interest in Ligotti when I found a copy on its first paperback publication (top, Carroll & Graf June 1991). Fellow traveler Ramsey Campbell provides the laudatory introduction: "He belongs to the most honourable tradition in the field, that of subtlety and awesomeness rather than the relentlessly graphic." Ligotti has nothing like Lovecraft's Cthulhu mythos but still hints at awesome powers and entities that flit and gibber just beyond the scope of one's perception. And is the "dead dreamer" of the title an oblique reference to the Great Cthulhu itself? According to the cover illustration... uh, well, no. 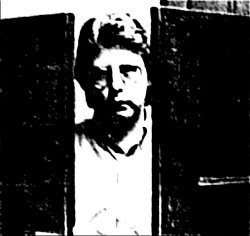 Ligotti's worldview is one of pessimism and despair, his philosophy born of the perception that what we see as reality is merely a false mask obscuring an unimaginable, even unfathomable truth. He reveals our own distorted reflection, in a foggy mirror, in a glass of Scotch, in the swirling waters of the bath drain, in the cracked lenses of antique spectacles, where we see our aging faces, our corrupt nature, our final doom (It had dozens of legs and looked all backwards and inside out). But then as Professor Nobody says, Horror is more real than we are; and who are we to disagree?
Posted by Will Errickson at 7:51 PM

Just found this book the other day love Ligotti's stories.

Ligotti reaches a level of horror that is hard to find today. Lovecraft and Campbell seem to be the closest to his style. Although erudite and sometimes arcane, he does create an idea of horror within the world. Monsters are not invaders in his works but like HPL, they were here first. Unlike Lovecraft, Ligotti creates a dream-like fearworld that imposes itself onto the narrators' worlds.