Blood of the Impaler by Jeffrey Sackett (1989): Legacy of Brutality 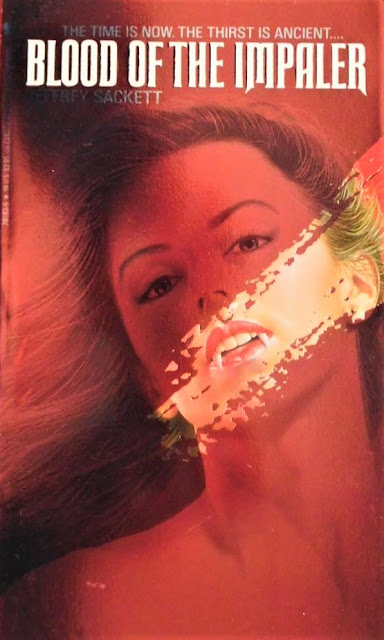 Intended to be a sort of sequel to Stoker's original Dracula, Jeffrey Sackett's Blood of the Impaler is much like its title: stilted, awkward, obvious, and tone-deaf, in dialogue, characterization, plotting, and horror. What became of Sackett I don't know but he apparently wrote four or five historical horror novels for Bantam Books that came and went without a trace and are now all out of print. I had never run across one of his books that I can recall back when he was publishing them. Even if I had seen this book, its lack of any critical or author blurbs would've turned me off, I mean, I'm that much of a book nerd. A Google search did turn up this interview with him from, oh my god, 1990.

Malcolm Harker, a twenty-something bartender in Queens, NY, is the great-grandson of Jonathan and Mina Harker. Of course you remember them. He learns his family has Dracula's blood literally in its veins, caused by Dracula forcing Mina to drink his blood in the original Dracula. Which really happened. Except Malcolm thinks it was just a book and those crazy movies. But his grandfather Quincey, son of Jonathan and Mina, has all the letters and documents that Stoker based his classic book on. And only being really super-religious can prevent Dracula's blood—the blood of the Impaler, natch —from taking the Harkers over. But Malcolm feels terrible during the day and loves the nightlife, so after reading said documents, he thinks there might be something to all this nonsense. 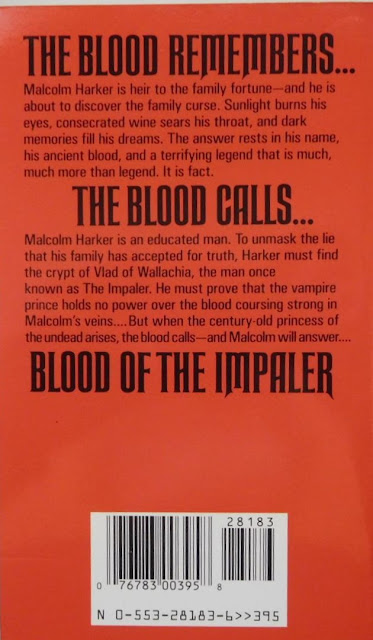 He decides to hie it on over to England with his friends, bartender-womanizer Jerry and best gal-pal Holly, to track down Lucy Westenra's remains. Fans of the novel will remember her as Mina's best friend and Dracula's early victim, a young Englishwoman who would then feed on children (who called her, chillingly, the "Bloofer lady"). Of course they find her remains with a stake through her heart and her head severed. So - get this - Malcolm bleeds on her to bring her back to undead "life" in her crypt, and quizzes her on her master Dracula. Seriously. They learn if they find Dracula's ashes and distribute them outside his native land they can prevent him from ever returning to seek vengeance on the Harkers.

from the author's Amazon page

Sackett (pictured above), a professor of ancient history and languages, knows his Draculean lore, both the real Vlad the Impaler and Stoker's fictional character. He fills in some gaps in Dracula, invents some reasons for this or that vampire factoid, and inserts scenes of Vlad the Impaler's life throughout. Malcolm starts having terrifying visions, historical visions, of Vlad doing what he did best, which of course start to freak him out. Eventually Jerry meets the woman of his nightmares and Holly meets the only woman who can keep her from Malcolm. Sackett makes the all-important shift from Vlad the Impaler to Count Dracula rather clumsily and much too quickly - one page he's sealed his pact with the Devil to become nosferatu and the very next, he's welcoming Jonathan Harker into his castle. Would've liked to have seen some of the in-between, oh, four centuries.

I have to say, I almost gave up on this one: much of the tale plods along and the dialogue is achingly bad; one mark of an amateur writer is how many times characters refer to one another by their names ("Jerry, listen to me: we have to go to England." "Malcolm, you're crazy." "You may be right, Jer, but please!" "All right, Malc, let's go"). Resolving to speed through the final chapters, I then happily found that the novel wraps up everything satisfactorily. It ties together the disparate plot points with elements from Stoker's novel—such as how Dracula survives to the modern day—which causes a crazy final confrontation between the vampire lord and the Harkers that's bloody and gruesome and unholy.

As far as the cover art, I dig the windswept hair, the bare neckline, the come-hither look... But who's she supposed to be? Lucy Westenra? Holly? One of Dracula's wives? More please. If there's one thing I've learned about vampire stories—and as you can tell from my blog banner image at top—it's never, ever stint on the vampire ladies.

It's probably still better than Twilight. (Yes, I'm one of those Twilight haters who can't resist an opportunity to slam)

I love the covers of these old paperbacks! Every time I peruse your blog I get a strong urge to want to start my own collection. It’s been a while since I read any horror literature but I actually picked up ‘The Light At the End’ from a used bookstore on the weekend.

Thanks guys! My paperback collection has grown by nearly an entire shelf in the last 2 weeks alone so there's plenty more of 'em coming.