Sunglasses After Dark by Nancy A. Collins (1989): They're So Sharp 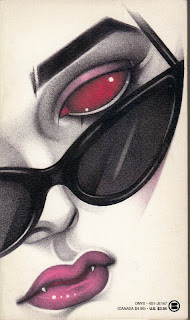 I don't remember a thing about the vampire novel Sunglasses After Dark except that at one point, Jim Morrison comes back as a vampire for a chapter, or something like that, which I thought was pretty cool back in the day. Nancy Collins wrote some sequels to this featuring her character Sonja Blue, a vampire hunter, but I never read them. This was part of the post-Anne Rice generation when authors were reimagining vampires for the modern age. I guess that's better than reimagining them teenage and glittery. These days I'd just as soon put on an old Siouxsie Sioux album and be done with it. I've heard Collins was not too keen on the Underworld movies since they seemed too similar to her Sonja Blue series and sued the producers. But you can't deny the striking artistry (courtesy of Mel Odom) of this cover, which is the sole reason I kept my copy for 20 years in pretty nice condition. I love that the title and author are only on the back cover; later printings added them to the front which is far less effective. 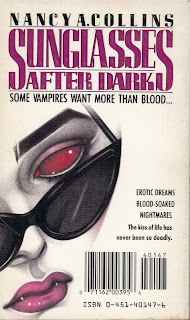 Posted by Will Errickson at 6:45 AM