The Light at the End by John Skipp & Craig Spector (1986): Midnight Graffiti 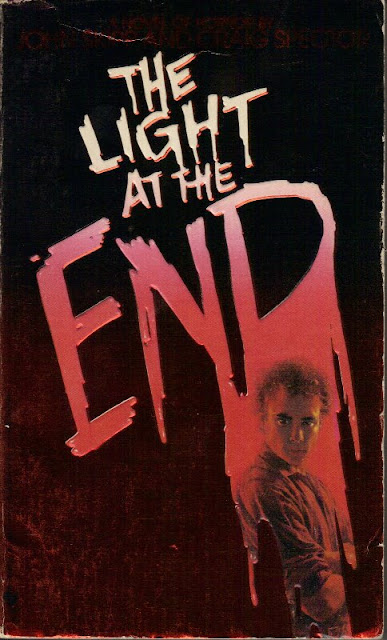 Horror writing duo - yes, duo - John Skipp and Craig Spector stormed the horror fiction field in 1986 with this paperback original about vampires in the New York subway system, The Light at the End. "Unique, funky, masterful," states the back cover, always the place to go for truth in advertising, "It's a guitar riff fingered by Satan, bizarre graffiti splashed in blood." Uh, what? This is the kind of novel that wants to impress you with its attitude, casual and swaggering, and it might work if you were a teenager (like me) when you first read it. 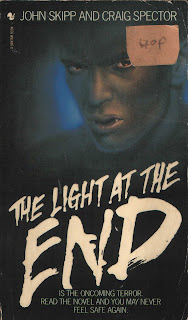 But it's still kind of a fast fun read today, even if it tries too hard to be cool with lots of smart-ass, ironic knowing humor, its bike-messenger protagonist and tough cops and gothy streetwise ladies - so, maybe Taxi Driver meets Quicksilver meets The Craft meets Fright Night (woah, S&S wrote the novelization for that)? Yeah, cool. Silvery-red cover with graffiti-style font, but who's that vampire dude think he is? Dean Stockwell?! 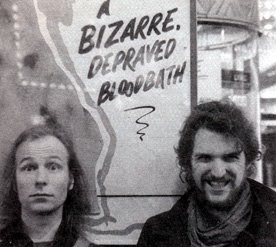 Skipp and Spector put out a handful of pretty cool collaborations and edited the essential zombie anthology Book of the Dead in 1989 before splitting up to pursue solo projects. They spear-headed that whole splatterpunk movement which ruled horror for a red-hot minute (the "splat pack"), pissed off the old guard like Robert Bloch and Charles L. Grant, and then disappeared for quite a few years (although I'd swear someone like Chuck Palahnuik owes a debt to it, and definitely Bret Easton Ellis's American Psycho). I've still got a fondness for these guys, obviously, so more on 'em is coming, particularly Book of the Dead and its sequel, 1992's Still Dead. Irony-free, I promise.
Posted by Will Errickson at 4:41 PM

Only book I've read from these dudes is The Scream. It's a good one. Very dated but awesome.

Part of what appeals to me about these books is that very datedness which, as I've pointed out, causes embarrassed cringing while re-reading them . I loved The Scream but my copy went missing when I was in high school. Definitely one I'm tracking down for a future post.

Coolness. Hope you find it, duder. Here's one you should check out if you are looking for something trashy, gory, and kind of bad: Clawhammer by Paul Dale Anderson.

I loved The Light at the End when I first read it and enjoyed their The Cleanup. Think I also read The Scream, though I'd be hard-pressed to recount the plot. I've still got Animals somewhere at home and didn't they write an eco-horror novel about toxic waste or something? Think I've got that in a box somewhere, too, unread. Just found your blog and am enjoying it so far. How about some reviews of author Stephen R. George?

Funny you should mention George, Craig, as I've only become aware of him recently and found his crazy-ass book covers, particularly this one:

I know this post is over 3 years old but...Wow. Finally got around to reading "Light at the End" last night, after owning it for years, and I have to say it's one of the two or three best, most intense vampire novels I've ever read. I think you may have sold this one a little short, Will (even though it is listed in your "Top Reads" section). I'm 34 and it kept me glued for 6 straight hours. I think what separates Skipp & Spec from the rest of the Splat Pack--even Barker--is their near King-esque skill at characterization. You get to intimately know each and every character, even the ones that only get a few paragraphs (before they meet their grisly end). Sadly, I think these guys peaked early, as they never quite matched these heights again, imo, though I've yet to read their short story collection-turned novel "Dead Lines" (it's now moving to the top of my TBR, however). "Light" may be dated in areas, but it's true to its era, and effortlessly conjures up images of nighttime mid-80s Manhattan.

FYI, their Fright Night novelization is actually really fun, and adds some cool "deleted scenes." Not worth the $40-$50 prices I'm seeing online, but well worth a read if you can find it cheap. I recently got the UK edition from Amazon UK for like $6 US (it has a better cover anyway: the bluish, evil face-in-the-clouds movie poster).