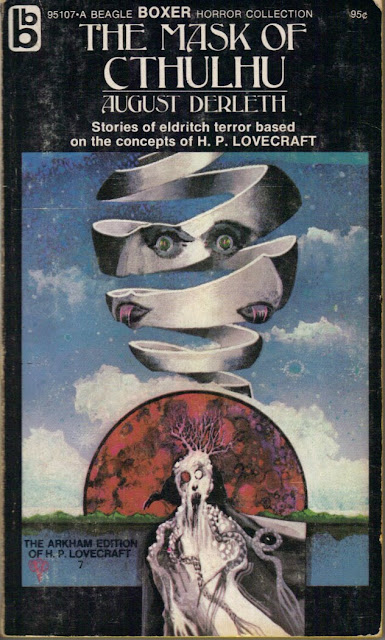 August Derleth, founder of Arkham House Publishers, kept the H.P. Lovecraft legacy alive when it threatened to disappear into pulp obscurity. Now, more than half a century later, Lovecraft's name is venerated the world over. Derleth (along with countless other writers over the decades including Robert Bloch, Robert Howard, Brian Lumley, and Ramsey Campbell) penned his own tales utilizing the Lovecraft mythos, published in hardcover originally by Arkham House as The Mask of Cthulhu (1958) and The Trail of Cthulhu (1962). What you see here are the paperback reprints from Beagle Boxer, July 1971, with surrealist, mind-bending cover art by Victor Valla. 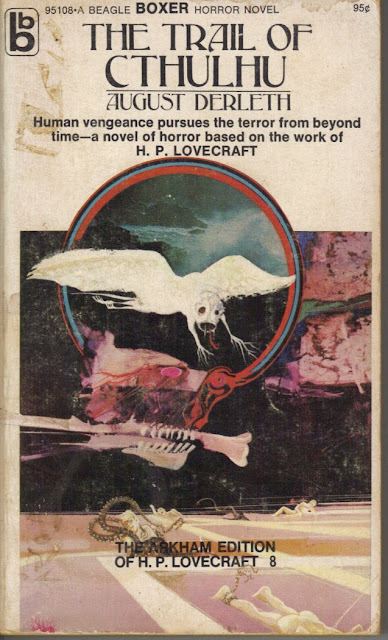 Derleth has been criticized by Lovecraft purists for drastically altering the philosophical underpinning of Lovecraft's original stories into a more balanced, even Christianized, cosmic whole. Lovecraft was a staunch atheist who saw a bleak, cold, and absolutely indifferent universe in which humanity had no special place. Most of Lovecraft's followers, however, adapted the mythos to their own needs and creative visions. Some feel this more humanized viewpoint weakens the impact of Lovecraft's mythos; I tend to that opinion, and have read very few of the Lovecraft followers. 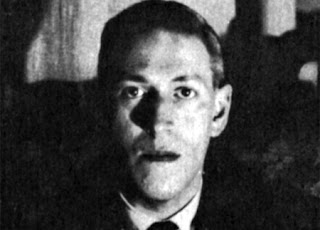 However, Derleth (below) succeeded where Lovecraft (above) often failed: in writing a readable prose. In fact, many of the stories here seem practically  classic Lovecraft stories re-written in actual readable prose. His style is almost hard-boiled, with no affectation of language, no preoccupation with archaic style, no excessive adjectives, and little of the bizarre recreations of rural dialects. The stories strive for an atmosphere of cosmic dread, of fear and loathing, of awe at the vastness of space and the littleness of mankind in its void, often reach it, sometimes are rote exercises. 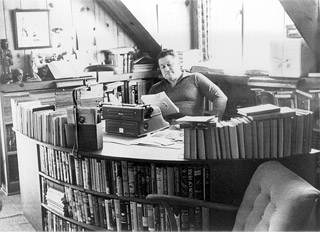 But there was time for me to to delve into the secrets of my uncle's books, to read further into his notes. So much was clear - he had belief enough to have begun a search for sunken R'lyeh, the city or the kingdom - one could not be sure which it was, or whether indeed it ringed half the earth from the coast of Massachusetts in the Atlantic to the Polynesian Islands on the Pacific - to which Cthulhu had been banished, dead and yet not dead - 'Dead Cthulhu lies dreaming!' - biding his time to rise and rebel again, to strike once more for dominion against the rule of the Elder Gods...

See? Nary an "eldtritch" or "noisome" or "star-flung" to be found. The above passage is found in "The Seal of R'lyeh" from Mask; it is my favorite story here, with a deepening (or perversion, as Lovecraft experts may see it) of the Cthulhu mythos and some really strong, evocative, subtle writing. It is similar to "The Shadow over Innsmouth," but since that's such a wonderful story I don't mind. "The Return of Hastur" and "Something in the Wood" are standouts too, with everything we love about Lovecraft: lonely landscapes, ancient books, strange old locals with funny accents and terrifying tales. Trail is an entire novel by Derleth but I have not read it. 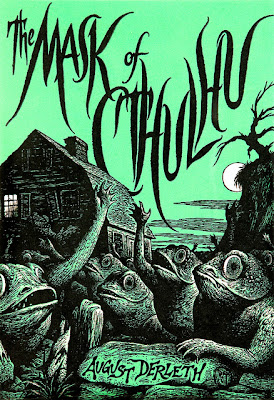 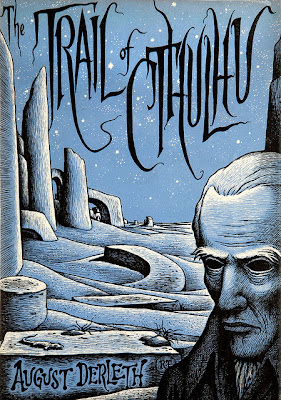 It's good to see these two works back in print together in Quest for Cthulhu (although boo on that Godzilla-esque cover art). My moldering copies were published by Beagle Books in the early 1970s and have that great old-bookstore smell that reminds me of staying up late on summer nights reading when I was 15. I wouldn't part with them for anything, not even my very own shoggoth. While I obviously prefer the original visions of Lovecraft himself, Derleth's stories are powerfully imagined, clearly told, and come recommended from this (almost) lifelong Lovecraft fan.
Posted by Will Errickson at 4:58 PM

I love Lovecraft. I will have to look for these two!

As a new convert to HPL, I have to say I'm quite fond of his awkward prose. In fact, it is a constant reminder of his presence. I read awkward, archaic, insular sentences and I see HPL as the same. His prose perfectly mirrors his personality and perspective. How many writers can you say that about? or, say it so quickly? I'm also a purist in most things so the hint of a good vs. evil aspect to anything Cthulhu is, well, sacrilegious. For me, the most frightening quality of HPL's universe is the total indifference to all human constructs. Having said all that I'll give these a look. Thanks again, Will, for introducing me to one of my favorite authors.

You're welcome! We must never have talked about him back in the day. You make great points--it's his prose that makes him so addictive and unique. Stephen King has an HPL-inspired short from the '70s, called "Jerusalem's Lot." It's in NIGHT SHIFT and it's pretty cool, written in that sort of archaic style.

i just finished Derleth's story "The House in the Valley". It was competent, but lacked the arcane language that is essential to creating the weird atmosphere of a Lovecraft story. In fact I found it flat. Disappointing. Perhaps this was not his best piece, but the writing style did not capture my imagination.

Not all of them worked for me either but I think some readers would dig Derleth's HPL tales. Recently I've been reading a few of Derleth's original short stories, and I recommend "The Drifting Snow."

I agree with you Will on "The Drifting Snow". For all the hate his Lovecraft-style works gain, Derleth's gothic works are sadly ignored. Lest we forget, without Arkham House HPL may have been lost to the sands of time along with Campbell and Lumley.