Live Girls by Ray Garton (1987): Leave You with a Lethal Dose 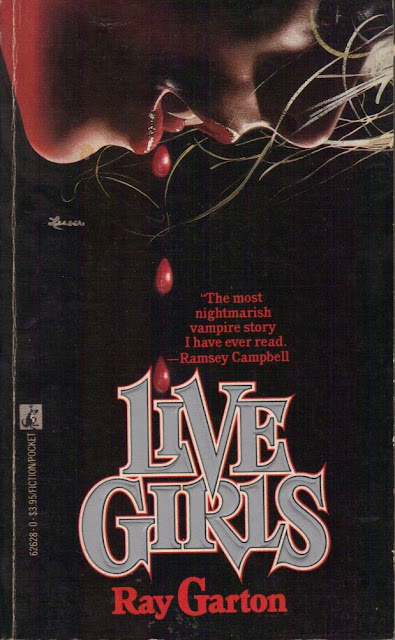 After about 20 years, I recently reread Ray Garton's infamous paperback original from the heyday of splatterpunk, Live Girls (Pocket Books, Jan 1987). And man, is it one delightfully sleazy read that holds up. You got Times Square in all its squalid neon-soaked glory, vampire ladies who haunt strip-club glory holes, even some ravenous creepy-crawlies squirming in the basement of said strip club, and a poor shlub of a regular workaday guy who gets swept up in it all. Can't really blame him, I suppose. I remember reading it as a teenager with my jaw hanging at about the neck of my Ramones t-shirt back in '88 or '89 (was probably wearing the same Ramones shirt this read too). 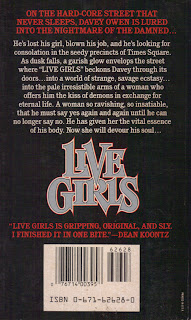 Garton garnered a bit of reputation as a horror author who pushed boundaries but in a less artful way than, say, Clive Barker. But that's okay with me; Live Girls has energy and spirit and daring to spare.  It was out of print for ages but came back in 2006 (thanks to Leisure Books) due to popular word of mouth, and with this rather more accurate - yet clip-arty - cover imagery: 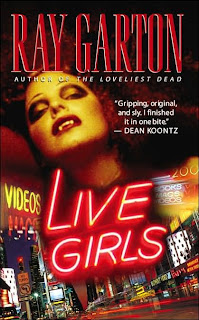 I prefer the understatement of the original because the reader doesn't really know what's in store, and that's just great. There are sequels and an upcoming movie adaptation, apparently, but one Live Girls is plenty enough; I just don't have that much jam.
Posted by Will Errickson at 7:12 AM

This certainly wasn’t bad for what it was, but the horror/action scenes were better than the stock characters.

- I noticed that LG was cinematic, and that made me wonder if the strikingly young Garton wrote it with visions of movie options dancing in his head… [I just re-read the review’s part about a movie adaptation. Hmmm, I wonder if it would take place in ‘80s Times Square or be updated for the Internet age?]
- Yeah, they’re many sexually explicit scenes, but oh-boy are they not erotic. Really more uncomfortable. It caused me to wonder, though, if the specter of AIDS hung over this novel. The sex trade in ‘80s New York? The information about how the vampires become sick if they attack the “wrong kind” of victim?... AIDS is never mentioned in the novel (from what I remember), but that just made me wonder if that’s further evidence that Garton was getting at some kind of symbolism.

I'm sure Garton wrote the novel with a movie version in his head, that just sounds right! But I haven't heard anything else about an adaptation since this post.

The AIDS metaphor pretty much hung over every piece of vampire fiction in the 1980s!