The Haunting of Hill House by Shirley Jackson (1959): Who Are the Mystery Girls? 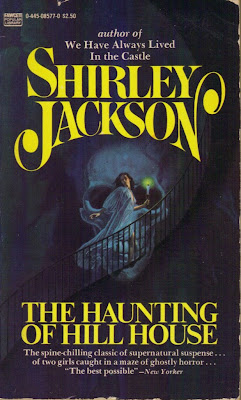 No live organism can continue for long to exist sanely under conditions of absolute reality; even larks and katydids are supposed, by some, to dream. Hill House, not sane, stood by itself against its hills, holding darkness within; it had stood so for 80 years and might for 80 more. Within, walls continued upright, bricks met neatly, floors were firm, and doors sensibly shut; silence lay steadily against the wood and stone of Hill House, and whatever walked there, walked alone.
Often cited as the greatest opening paragraph in horror fiction, Shirley Jackson's now-classic haunted house ghost story The Haunting of Hill House was a huge popular and critical success upon publication. And what a wonderful cover, by artist William Teason; this edition is dated March 1977 from the Fawcett Popular Library, from the era of Gothic romances: always heroines fleeing across windswept moors or down castle stairs, about them flowing their black hair, in diaphanous nightdresses revealing tasteful decolletage, an imposing house in the background with one single light burning in an upstairs room. Perhaps there is a dominant, darkly-shadowed male nearby as well, with the threat of sex looming. However I don't have much interest in Gothic romance except for the covers; there's a great selection here. 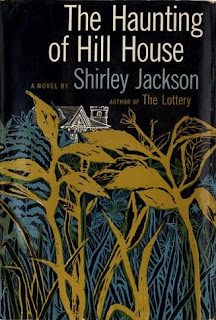 Viking Books hardcover, 1959
But then, all this talk of Gothic romance only applies to the cover of this particular edition of Hill House, as the novel is not really a Gothic romance at all. I suppose a literary historian could argue that all horror fiction is, at bottom, Gothic romance - I recall that argument being made by a professor of mine back in my very early college years - but Jackson's rational approach to her tale doesn't seem "romantic" at all. The "love story" might be between Eleanor Vance and fellow intrepid haunted house investigator, the psychic Theodora. Whose hand is Eleanor holding? Is it not Theodora's? What does Theodora see but won't tell Eleanor? I know this lesbian subtext is discussed as an undercurrent in the 1963 movie version, with its images of the two women embracing each other in bed - out of fear, true. But fear of what, exactly? Ghosts? Or something much more... intimate? 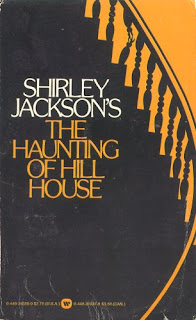 Warner Books paperback, 1982
So perhaps the romance is between Eleanor and, chillingly enough, Hill House itself. Journeys end in lovers meeting, she repeats to herself throughout, this timid, mousy young woman seeking a personality. I confess it's been about 15 years since I read Hill House, my memory might be off, and I'm a bit afraid to read this little old paperback I've got because it might not stand up to the strain. This all reminds me of starting a new job at a used bookstore back in the late '80s, when my boss was showing me how the store was organized. He asked me, "Do you know what Gothic romances are?" I had to admit complete ignorance. What use would a teenage guy have for that? And he described it just the way I have above: a girl in a nightdress beneath a house with one light on upstairs. I think he told me the perhaps apocryphal story of one such Gothic romance title whose cover art had a house with no lights on at all; the book sold miserably. Fans of genre fiction tend to want things their way or no way at all. And there's no mystery about that.
Posted by Will Errickson at 8:35 AM

Great blog! I'm totally fascinated! My take on Hill House was the romantic notions had to do with the original owner's tragic wifely demise, setting up a sort of romantic haunting like you hear about in the South where the ghostly woman in white paces the window awaiting her Civil War soldier's return... I had to laugh about the book without a light on the cover. It reminds me of the movie "Dying Young" with Julia Roberts-wow! Is that a casebook for being careful what you name your romantic movie???

I haven't read the book but am I huge fan of the movie. Its one of my favorite horror films and am in love with the way it was shot. One of my favorite things about it is all the love plots going about it, but my favorite is definitely the relationship between Nell and the house, the house being it's own character by itself. The scene with the hand holding is effectively terrifying, specially with the shot of the house soon after Nell ask who was holding her hand. Yeesh.

I need to pick up this book.

I too have never read this book but am a fan of the film. My first exposure to the writing of Shirley Jackson was in grade 8 when we were assigned to read the brilliant 'THE LOTTERY'. Shamefully, I've only read a collection of her short stories since! I definitely need to pick a copy of this book up!

Wow, this was a great review about a great book, one which I now want to go read again since it has been so many years. I think I will probably wait a while and sit down with it on a cold October night, and then, once finished, pop in the old movie as well, a movie which still scares me to death whenever I watch it alone. Oh yeah, now I can't wait.

I'm trying to find out who the cover artist was for the Fawcett Popular Library edition of The Haunting of Hill House by Shirley Jackson. Would you know or have a source to find out about it?

I've been trying to find out for years! I can start looking again, have a few sources. Thanks for reading!