How can any horror fan resist spooky drippy letters scrawled in Crayola-red blood? I'm not really sure what the Chinese dragon shadow has to do with a movie-themed collection of horror stories, though (thanks again to Tor's horror line). Published in paperback in November 1988, Silver Scream is a thick anthology that I read off and on for ages during my later high school years. Honestly, I still have not read everything in it. The authors included were the top of the line of the genre for the day: Clive Barker, Ramsey Campbell, Robert McCammon, Joe R. Lansdale, Karl Edward Wagner, John Skipp, Craig Spector, and noted horror critic and biographer Douglas E. Winter. The editor, David J. Schow (pictured below), was known as the writer who jokingly, perhaps cringingly, coined the term "splatterpunk" a few years earlier in response to the William Gibson/Bruce Sterling/John Shirley-powered "cyberpunk" movement over there on the science fiction shelves. 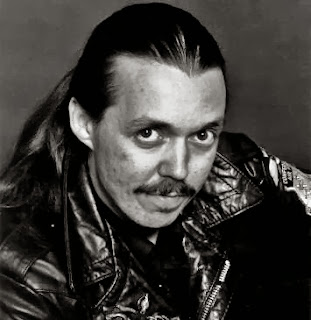 And the stories contained herein? Mostly terrific. There's the very first Barker short story I ever read, "Son of Celluloid," about a cancerous demon that infests a flea-bitten old cinema and causes poor doomed patrons to hallucinate eyeballs popping out of Norma Jean's nethers; "Night They Missed the Horror Show," a knock-your-dick-in-the-dirt tale of racist hillbilly snuff-film connoisseurs from Lansdale his ownself; Winter's oblique alphabet of gore movies in the always not-so-distant future where censorship reigns, "Splatter: A Cautionary Tale."

Also included are Ray Garton's "Sinema," which is one of my faves of the era, standing up to the hypocrisy of religious mania; "More Sinned Against," from Wagner, a wicked whip-snap of Hollywood comeuppance; then there is Mick Garris, F. Paul Wilson, Robert Bloch, Richard Christian Matheson, and others lesser-known. But all are defiantly horror, passionately written and filled with enough perversity, bodily effluvia, and viscera—as well as some dorky attempts at splatterpunky bad-assery—to embarrass the man who was once the boy who loved this stuff, and (usually) still does. Then there's an intro by director Tobe Hooper, and a rambling yet chummy final end-note, "End-Sticks," from editor Schow. This was pretty standard for the day. I can't imagine what kind of trouble these dudes got up to at the horror conventions back then. If Wagner was around, I bet it was a raging all-nighter... 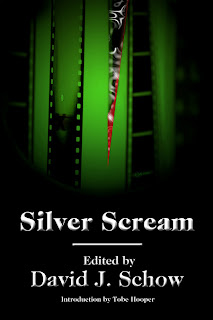 But my favorite story in Silver Scream is Steven R. Boyett's "The Answer Tree." Wow. A skeevy film professor attends the secret showing of a deranged and legendary filmmaker's final movie, a mix of the midnight movies of Jodorowsky with the confrontation of Artaud and the surrealist imagery of Buñuel (who said horror fiction fans were cultural dullards? Or perhaps I'm compensating). In recent years lots of people loved John Carpenter's episode "Cigarette Burns" for Showtime's Masters of Horror, and I liked it too, but it was really already covered by Boyett's story: a film that will drive its viewers to madness and murder and beyond. 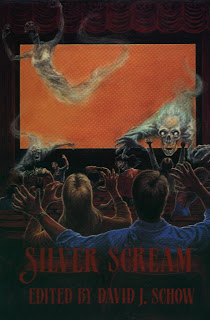 The hardcover was first published, also in 1988, by the now-defunct (as far as I can tell) Dark Harvest Publishers, who put out cool hardcover editions of mostly anthologies. But as usual, I prefer my original vintage paperback copy, which went for a cool $3.95 in 1988. That's okay with me. Hooray indeed.

Posted by Will Errickson at 6:11 AM

I loved this book when I read the paperback release all those years ago. I must say that Mark Arnold's "Pilgrims to the Cathedral" was my favorite back then. I am still miffed that no enterprising producer has decided to spring forth its bounty of horrors on an unsuspecting public. It would make such an incredible movie.

I'm late to the party, but just FYI, the Babbage Press reprint of Silver Scream never happened. They announced it, they released the cover art (shown above), but the disappeared before they actually reprinted it. David Schow talks about Babbage Press in this interview:

I'm pleased to report that after being out of print for 32 years, Cimarron Street Books (publishers of bare•bones magazine) has released an all-new trade paperback edition of David J. Schow's SILVER SCREAM! Now shipping! Free two-day shipping for Amazon Prime members! Available at www.amazon.com/dp/B08CWCGTSF (and other Amazon territories)

Great, thanks for the update, John--I'm so glad that this excellent example of '80s short horror fiction will be back in the eager hands of readers everywhere! This original Tor paperback edition is kind of rarity these days.

I am SO GLAD you stated your favorite story in this anthology was "The Answer Tree" - over 30 years now I've been telling people it's the best killer film story ever written. I tend to think maybe the director in the story was modeled on Pasolini? I have hauled out my original hardback of Silver Scream to re-read it so many times!

It may have been Pasolini because of the tragic way he died, but mostly I was reminded of many of the great European art directors. Glad to hear you've loved the story as long as I have!