The Doll Who Ate His Mother by Ramsey Campbell (1976): Tell Your Children Not to Walk His Way 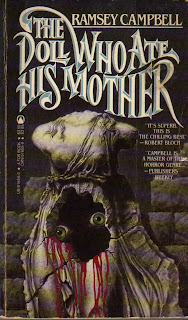 With a title seemingly ripped from tabloid news headlines, The Doll Who Ate His Mother was Ramsey Campbell's first novel and leagues away from the Lovecraft-inspired short stories with which he'd made his name. Campbell first parted ways with the Gentleman from Providence in the collection Demons by Daylight (1973) and continued to forge ahead with his own unique, if often maddening, style of skewed reality and malevolent urban blight. Despite having noted time and again here on Too Much Horror Fiction about my - and plenty of other folks' - hot-and-cold feelings about Campbell's output, I have a fair collection of his stuff published by Tor in the 1980s, when he was one of their leading lights, and I wanted to try his novels from the beginning. Stephen King also wrote favorably of Doll in his Danse Macabre, and although I certainly don't agree with King all the time, this novel seemed like an essential horror read from that vintage '70s era. 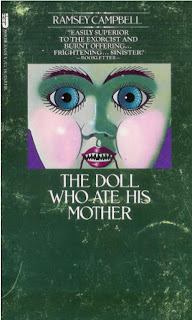 Another cool thing about Doll is that it's in the fine tradition of bold, tasteless horror titles: Texas Chainsaw Massacre, 2,000 Maniacs, I Spit on Your Grave, Night of the Living Dead, et al., titles without ambiguity or allusion. Which is odd because Campbell is known for being a disturbingly quiet and reserved horror writer. So how does the novel itself stand up against its eye-catching title - or at least its creepy, evocative cover art (Tor edition with art by Jill Bauman, August 1985, at top)?

That most prosaic of real-life horror opens the novel: the car crash. On a drive through the night streets of Liverpool, young Clare Frayn survives the accident uninjured, while her brother Rob - a local radio celebrity - is killed. A man had stepped directly into the road in front of them, causing the accident, and witnesses see him running off cradling something in his arms. And the police are horrified to find that Rob's arm is nowhere to be found. Clare is soon visited by Edmund Hall, a real asshole of a sleazy crime writer, who thinks the man seen running from her accident was Christopher Kelly, with whom he'd gone to boys' school. Kelly was a fat, bullied child, but known to have fits of cruelty and violence. Hall wants to track him down and write a book about him, and enlists Clare's help. Soon they also add cinema owner George Pugh, whose mother was also killed, as well as hippie actor Chris Barrow, who lost his beloved cat to the monstrous Kelly. They muddle through the "case," hoping, bickering, afraid; no heroes they. 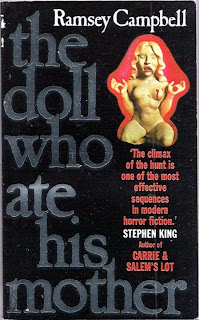 Campbell gives us glimpses of Kelly's background life and childhood, his mother's dalliance with black magic, his grandmother's utter terror of him. Slowly the four amateur sleuths get closer and closer to the truth as they probe the ugly, dank, broken-down estates of Liverpool. This is the kind of decaying setting Campbell can be both good and bad at illustrating; his descriptive powers are effective but jarring, displacing the reader from the narrative. There are a few satisfying moments of horror, but usually at a remove and not terribly graphic or shocking, while one rather major character is kept off-stage almost entirely. The climax is set in the muddy earthen basement of a condemned building where Clare confronts Kelly and other secrets that speak of the black magic that spawned our killer.

The earth gaped at him, its lips crumbled, glistening. At the bottom he could see a doll. It was a woman with a swollen belly. A mouth was emerging from the belly. At once he knew it was him in his mother.

When I began reading Doll I was half-expecting to be underwhelmed and confused as I often am with Campbell's fiction; in fact, I happily finished reading it in about a day. The narrative is fairly strong and the build-up doesn't lead you to expect a shattering finale (as The Nameless seemed to), the atmosphere is appropriately dour and grim, and the characters are distinctive (especially Kelly's horrid self-pityingly religious grandmother). The Doll Who Ate His Mother is not a forgotten classic but a passable, enjoyable read for horror fiction fans - and thankfully does explain that glorious and tacky title.
Posted by Will Errickson at 11:50 AM

Interesting review. I read this yonks ago but remember little about it. However, I recently read a novel ‘Ancient Images’ by Ramsey Campbell which really got on my nerves because it used some ideas I’d had before, but then discarded them in favour of a rather clichéd folk horror. I feel there is something uncomfortable about Campbell; a gifted writer of description and insightful about little Englanders but lacking a certain bite and imagination. Perhaps most of all he lacks ambiguity (which is one thing he could have learnt from Lovecraft whose intense tone often hides his surprisingly Borgesian way of writing tales as if the narrators do not quite understand the events).

Also, I don’t know if Ancient Images was really representative, but it also had the kind of worthiness of a middle brow 80s/90s male author gifting a female character with his idea of intellectual superiority: ‘she read Umberto Eco’ (no title; presumably the words ‘Foucault’s Pendulum’ would give us ghouls a brain haemorrhage).

I’m a frequent reader of your blog; well done on writing so prolifically and insightfully about so many books.

It's interesting. I like the idea of Ramsey Campbell more than his actual books. Does that make sense. I do like THE FACE THAT MUST die very much, though. It is my favorite book of his.

Another writer I never got into was Charles Grant. Again, I liked the idea of him, but I found his grammar and syntax virtually impenetrable. I must have started reading his first Oxrum Station book a dozen times before finally slogging through it.

John Saul, on the other hand, I find quite readable, even though his work is not terribly original. Still, CRY FOR THE STRANGERS, PUNISH THE SINNERS, and COMES THE BLOOD FURY kept me entertained.

Hmmm. Maybe I should give this one a try. I've sampled Campbell's books a few times but I was never interested enough to actually finish one.

Now I'm definitely looking forward to Face that Must Die...

"Also, I don’t know if Ancient Images was really representative, but it also had the kind of worthiness of a middle brow 80s/90s male author gifting a female character with his idea of intellectual superiority: ‘she read Umberto Eco’ (no title; presumably the words ‘Foucault’s Pendulum’ would give us ghouls a brain haemorrhage)."

No, not at all. It would have been prescient of me to refer to that Eco novel in a book I delivered to the publishers in June 1988. I had THE NAME OF THE ROSE in mind, the only Eco novel available in English when I wrote mine, and hoped the reader would pick up the reference to a tortuous search that leads to unexpected conclusions. I very much hope I don't write as if I feel I'm superior to the reader - I'm hoping to address equals.

And I confess my stuff isn't often accused of lacking ambiguity - far more frequently the opposite! But ANCIENT IMAGES was a conscious bid to write about an ordinary uncomplicated central character. I don't do that much now.

I just finished reading "The Doll Who Ate His Mother," which I'd been meaning to read for ages, ever since reading about the book in "Dance Macabre."

I really enjoyed it. I haven't read much by Campbell, and definitely want to read more. I am glad someone else mention that he or she was sometimes confused by his writing. There were times that I had to re-read parts to get the meaning. That being said, I'd rather read something well written and clever, than dumbed-down. I'd prefer to read something that stretches my brain, as opposed to wrote below it.

This is the first time I've read your blog, and am really enjoying it.

Thanks Proflandry! Be sure to try Campbell's short story collections DARK COMPANIONS, DEMONS BY DAYLIGHT, and the Lovecraft-inspired COLD PRINT.