The House Next Door by Anne Rivers Siddons (1978): The Dinner Party Horror 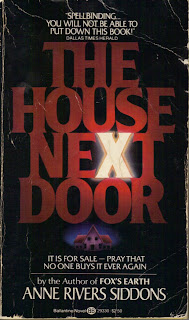 I simply love that glow-in-the-dark X, remember X was a big naughty letter in the '70s, exotic and spooky and enticing all at once: you had The Exorcist phenomenon and the rise of X-rated movies. Why, who knows what goes on in that house neXt door? Wife swapping, demon possession, adultery, Satan worship, stag films, key parties, or, perhaps, someone is wearing white after Labor Day! Serving bottom-shelf liquor at dinner parties! Hanging a velvet print of dogs playing poker in the den! Quelle horreur! 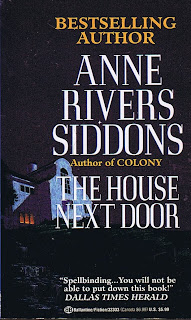 Indeed, that's just the kind of faux-pas that Anne Rivers Siddons, in The House Next Door, realizes terrifies up-and-coming, well-to-do folk in the New South in the modern age. They don't believe in boogeymen or poltergeists or their ilk, but an untended lawn in the dog days of August, or a family with too many kids' toys on the lawn, or a car in the drive that wasn't traded in this year, those are the types of things that make the neighborhood collectively shudder. Siddons, known today for genteel mainstream fiction, wrote her early bestseller in 1978. Stephen King himself championed it over several in-depth pages in his masterful study of horror Danse Macabre (1981), which is where I first heard of it. 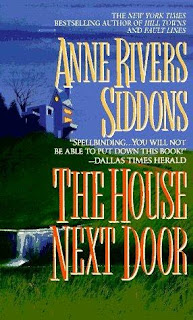 I've read this a couple times and really really liked it; I recommend it wholeheartedly. The novel's depiction of the easy, satisfying, slightly liberal social lives of smart young professional couples living in the rather upscale suburbs of Atlanta, is spot-on. But when the house in question, a stylish inviting marvel of modernity (unlike the home depicted on the original paperback), built by an aspiring and likable young bohemian architect, begins to affect its inhabitants at their most vulnerable spots, the game is on. The anxieties of trying to fit into predetermined societal strata, even when one is aware of their total bullshit quality, is relentlessly exploited. Colquitt Kennedy, the attractive Vanderbilt graduate in public relations, narrates the story in her calm, rational and perceptive manner:


We like our lives and our possessions to run smoothly. Chaos, violence, disorder, mindlessness all upset us. They don't frighten us, precisely, because we are aware of them. We watch the news, we are active our own brand of rather liberal politics. We know we have built a shell for ourselves, but we have worked hard for the means to do it; we have chosen it. Surely we have the right to do that. 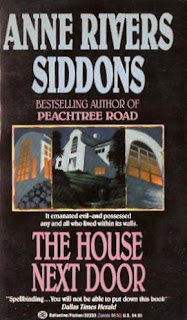 And it's Colquitt's, and her husband's, calm perception of what's happening that makes the reality so hard to accept or define. It's horror of the suburban kind, a masterful haunted house tale that's rooted in the most polite behavior, people horrified of giving offense or of having bad taste. Jobs could be lost, marriages broken up, ugly family secrets revealed, tennis partner can turn against tennis partner. But The House Next Door don't really give a fuck about your property values or your oh-so-tidy lives, that's for sure. 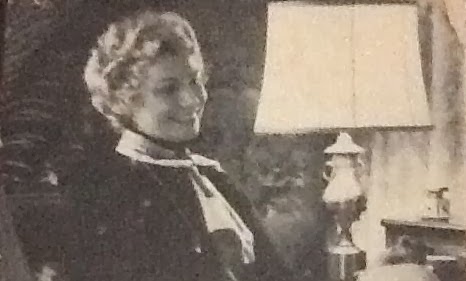 Siddons, from back of original hardcover dustjacket
Posted by Will Errickson at 3:38 PM

I finally read this one a couple months ago, could not put it down. Great post!-Unk

It is, as they used to say, "unputdownable"!

I listened to the audio book first and then later read the book based on King's Danse Macabre suggestion. Wow!

I finally found a copy of this and am reading it right now. I am having twinges of early-King dread already -- love it!

Lemme know what you think when yr done!

Just finished reading this one, based on your review —and since it’s the first time I’m commenting here (not counting a couple notes I sent to your Tumblr account), let me say that I really like this blog and your reviews. You do have a penchant for finding somewhat forgotten treasures (and sometimes running into overrated cult classics, but that’s another story).

Anyhow, I thought this was a terrific haunted house yarn, with a very precise use of suspense and character development —it manages to make the character’s fates feel inevitable and still fairly frightening, in no small part because of the mechanic at play. As one character ponders: “This house doesn’t bring out the best in people, it *takes* their best and uses it to destroy them!”

One note of criticism, however: There is that use of casual homophobia that seemed so prevalent in 70’s bestsellers and which dates this book notably. And it’s not just that the characters themselves are so shocked by it, which makes perfect sense. It’s that the thought of two married men having an affair with each other is presented to the reader as if it were on par with things like miscarriages, marital abuse and other things hard to mention without spoiling the book’s plot. And making it a literal “they weren’t gay, the house made them do it!” almost makes it involuntarily ridiculous, at that.

That said, this is still a memorable horror yarn, and worth at least one careful read.

That dated quality is one of the reasons I find reading older pop fiction so fascinating, even when it's something like homophobia, that ridiculousness of whatever was current when compared to today. What will our fiction look like to readers 40 years hence?

Even more intriguing (or frightening) is imaging *which* of our books will even be seen 40 years from now. We know it's not the most popular ones, nor the best, that stay throughout the ages, it's those with themes that resound with the readers of another decade, for one or another reason.

A different twist on the haunted-house tale.

Yes, it's almost funny to contemplate, but the idea of a haunted house causing its inhabitants to execute social faux pas is turned into an effective idea, here. There are even a handful of authentic scares.

As to the homosexual thing, from above, I agree with the author of this blog: Something I enjoy about reading books of all sorts from decades past is that it reveals the social mores of those decades, both good and bad.

I thought the gay reveal was in keeping with the spirit of the book, i.e., neighborhood scandals. As far as social standards of the time, I was more struck by the idea (umm, SPOILER alert?) that a married couple raising a daughter that wasn't the husband's would be such a deep, dark family secret.

Read it and enjoyed it in 2014 too, having first heard of it through "Danse Macabre". Good fun (and I have the edition you show at the top too!)

Just finished this, having picked it up because of Danse Macabre. Very good, with the social commentary mixing really well with the horror. I especially liked the ending, which shows Siddons mastering something a lot of full-time horror writers never do: namely, offering an explanation that does indeed explain while also really explaining nothing, this preserving the mystery.

Jonathan, glad you dug it. I might even read it *again*!

I read this book when it was first published...LOVED IT!