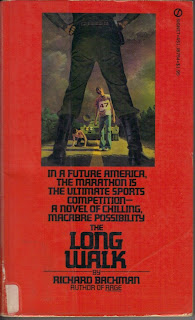 Have you looked up how much original paperback editions of Stephen King's pseudonym Richard Bachman are going for? Hundreds of dollars. Unfortunately I don't think my copy of The Long Walk is worth nearly that much; it's a discarded book I grabbed at a sale some time ago from my hometown library. I'm sure it's got to be the same one I read as a teenager in the '80s. It's actually coded inside as YA: Young Adult. Guess that kid in bell-bottoms on the cover makes the book look like it should be shelved with the S.E. Hintons and Robert Cormiers and Paul Zindels. 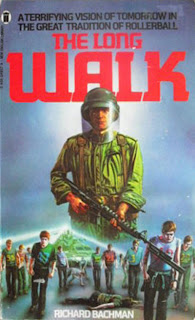 It's a grim and unrelenting short novel set in the near future in which there's an actual "long walk," undertaken by teenage boys deemed the fittest and healthiest. There is no finish line, no half-time, no fouls and no timeouts. Military men in tanks follow them to make sure no one walks slower than 4 mph; anyone who does is shot dead on the spot. The winner literally gets anything, everything, he wants. Like another Bachman book, The Running Man (1982), it posits a terrifying world in which games are played to the death while an enraptured populace looks on. The boys themselves succumb to their physical and mental limitations as well as the psychological tensions that arise between the last few Walkers. Its allegorical nature and ambiguous ending align The Long Walk with such maddening young adult fiction as I Am the Cheese and Lord of the Flies.

I was probably 14 or so when I read it, and it was a disturbing read, totally unlike King's horror novels. Probably not even fair to compare it to King's books because at the time, no one knew Bachman was his pseudonym. Now the book I really want to track down is an original copy of Bachman's Rage (1977), which King has let go completely out of print. Anybody got a spare $200 for an old paperback?
Posted by Will Errickson at 5:36 PM

Loved this story. I reviewed it on my site a while back. It was such a dense and nihilistic read that you almost forget it's King behind the pen.

I read this back in the 80's too, and loved it. I actually had Rage in my possession at that time, but didn't read it... little did I know this was a rare opportunity lost.

The Long Walk is one of the precious few King stories not tranlated to celluloid; let's hope it stays that way.

A good friend and I used to pass The Bachman Books collection back and forth between classes in high school and joke about Charlie Decker from Rage. Don't think that'd play today!

I recently read this one too. I was lucky enough to score a copy of the Bachman Books at a used book store that includes: Rage, The Long Walk, Roadwork, and The Running Man. All of these stories I felt, are much better than alot of King's other books. My favorites of the four were; Roadwork and The Running Man. The Running Man is NOTHING like the movie, I don't even see how they got that movie from the book.

Am I the only one who laughed out loud at the UK paperback cover's citation of Rollerball?

The Long Walk and The Running Man were similar in theme and were the two best entries in The Bachman Books. Grim and unrelenting are certainly good words for this one. I'm amazed that it was classified as YA fiction. Just because it's ABOUT young adults doesn't mean it's FOR young adults.

Oh, and Rage was the weakest. Sophomoric and rambling, a bare two out of five stars from me.