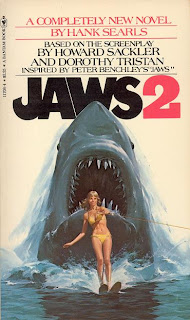 Somewhere I'd gotten a hold of the Reader's Digest Condensed Books (ugh, what a concept) edition that included Jaws 2. It had these cool little illustrations - none of the shark, alas - and I must've read that thing a dozen times. It took me forever to figure out that Brody's son's name, Sean, was pronounced "Shawn" and not, of course, "Seen." But I was like 10, give me a break.

On vacation the summer of 2008 visiting my hometown, I found a copy of the original at the bookstore I used to work at, and read it pretty much in an afternoon with a rum and Coke (the only booze I could find in my mom's cupboards, left over from her Christmas fruitcake). What did I find, as an adult reader? Why, the book held up. Remarkably well. Hanks Searls' novelization is better than Peter Benchley's original 1974 novel, and better than the 1978 movie, which I feel is more of a teenage slasher flick. 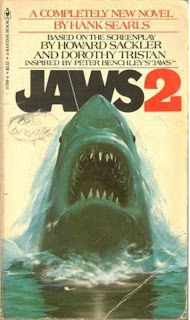 This "version" of Jaws 2 is rather moody in a believable way, and much more concerned with character conflict. In the fictional town of Amity, business is down and shops are closing up. Police Chief Martin Brody broods, and can't shake the nightmare, or the Trouble, as it's vaguely referred to around town. It's as if the original great white still haunts Amity, as if its ghost still glides silently through the darkened offshore waters. But it is no ghost. The titular great white is a female this time, over 30 feet long, gravid with rapacious young. 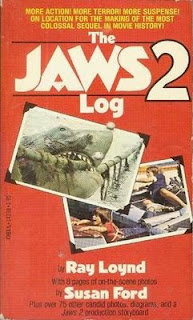 This novelization is based on an earlier draft of the screenplay than the one produced, and Searls is a much more competent and skillful writer than Benchley; he'd already written several novels that took place at sea and dealt with marine life. As for the cover art, the movie could never hope to replicate such a dramatic image (courtesy of legendary cover artist Lou Feck). But the attacks as Searls writes them are weirdly metaphysical and existential at the same time:

He had a vision of himself, as if from above, enveloped by a dark shadow from the sea. No thought of a shark entered his consciousness: he'd offended somewhere, this was the hand of God. Mangled and torn, he knew nothing else. 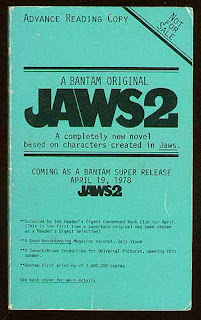 It's this fatalistic quality that gives Jaws 2 a grim verisimilitude the original novel only hinted at. Any serious Jaws fan should give it a try.


Before her, an invisible cone of fear swept the sea clean, from bottom to surface. For a full mile ahead the ocean was emptying of life. Seals, porpoises, whales, squid, all fled. All had sensors - electromagnetic, aural, vibratory - which were heralding her coming. As she passed, the Atlantic refilled in her wake. Man would have ignored such sensors, if he still had them.

She grew more ravenous with every mile that passed... 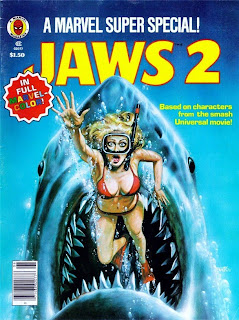 I may have to dig around and find a copy of this one - will check eBay. I had no idea it would actually be good, guess it never occurred to me. I am a VERY serious Jaws fan, BTW :)
*And I used to think the same thing about the name Sean. WHY is it spelled like that!?

Oh, and I SO remember those Readers Digest Condensed books - my grandma used to get them and I read (can we call it that?) many an edited story out of those tomes. Ugh indeed.

Sean is the original Scottish spelling, I believe, as in Sean Connery.

I actually had this paperback once, but I never got around to reading it. Had I an inkling of it's excellence I may not have sold it for pocket change in a rummage sale.

I wouldn't say it's excellent, but it is worth a little more than pocket change.

Cool. I chose ALIENS over JAWS 2 this weekend, but maybe I'll go back for the latter next.

The script for JAWS is also worth reading - lottsa prose left intact.

I am hoping to find this at my grandmothers house. Surely it wasn't thrown away...at least I hope it wasn't. I had the JAWS 4 novel, too, but I don't care what happened to that one, lol.

I'd actually recommend Benchley's "Lush" (also titled "Rummies") as his best novel - nothing like his seaborne fiction, it deals with alcoholism from an obviously personal perspective. Still, as someone whose first "grown-up" book was "Jaws" at age eight (followed shortly thereafter by "The Exorcist," to my eternal psychosis), thanks for your reminiscences. And great blog.

Jaws 2 was a better as a book Sequel to the original movie. The story is fleshed out without any over expostion .Its a good read

I remember there was a tiny subplot with Mafia involvement.