Some of Your Blood by Theodore Sturgeon (1961): Somebody Put Something In My Drink 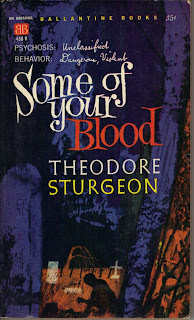 Usually known as a classic science fiction writer, Theodore Sturgeon reworked vampire mythology with his short 1961 novel Some of Your Blood. George Smith is not an undead creature of the night but a young American soldier with a blood thirst. Profiled by a military psychiatrist, Sturgeon presents a sympathetic view of his protagonist pretty much at odds with virtually all vampire fiction to date.

This first printing paperback original from Ballantine Books was a pretty good eBay score recently; in like-new condition, reasonably priced, but the spine is a little off which always kinda bugs me--would it kill booksellers on eBay to photograph their books at an angle so you can see the condition of the spines? I can't be the only one who thinks about stuff like that. But how can you not dig that title font, so jaunty and rakish? The impressionistic man and woman at the bottom of the cover? Love that midnight blue as always. Back in the '90s I bought the reprint from Carroll & Graf, which has kind of a spooky cover but is really nothing on the original: 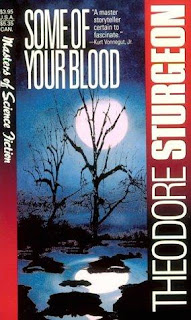 Pretty sure that's always the case. Somewhere though there has to be an exception, don't you think? I can't be the only one who thinks about stuff like that.
Posted by Will Errickson at 5:36 PM

I've been thinking about it since I stumbled across your blog a few weeks ago, but so far I got nothin'.

The earlier covers tended towards sparer and more allusive artwork, and the results were more striking.

Newer ones generally have a more blatant and desperate look about them, like cheap ads, and tend towards the most literal representations of the contents of the books, laid out as coldly and boringly as diagrams. It's almost an anti-style, like what you see on a lot of movie posters these days, which are basically designed just to have stars' faces feature as prominently as possible.

"Anti-style" is quite an accurate description for most of today's genre fiction covers, I think! Foil-stamped author (brand) name and a tiny cropped image of a leg or neck or knife or gun or fang or mansion, that's all you get.

Paperback cover art design from the 60s is generally the best. Publishers really weren't afraid to try lots of 'out there' stuff especially for genre fiction.

Indeed, and Richard M. Powers was responsible for a lot of it!