The Nameless by Ramsey Campbell (1981): Children in Heat 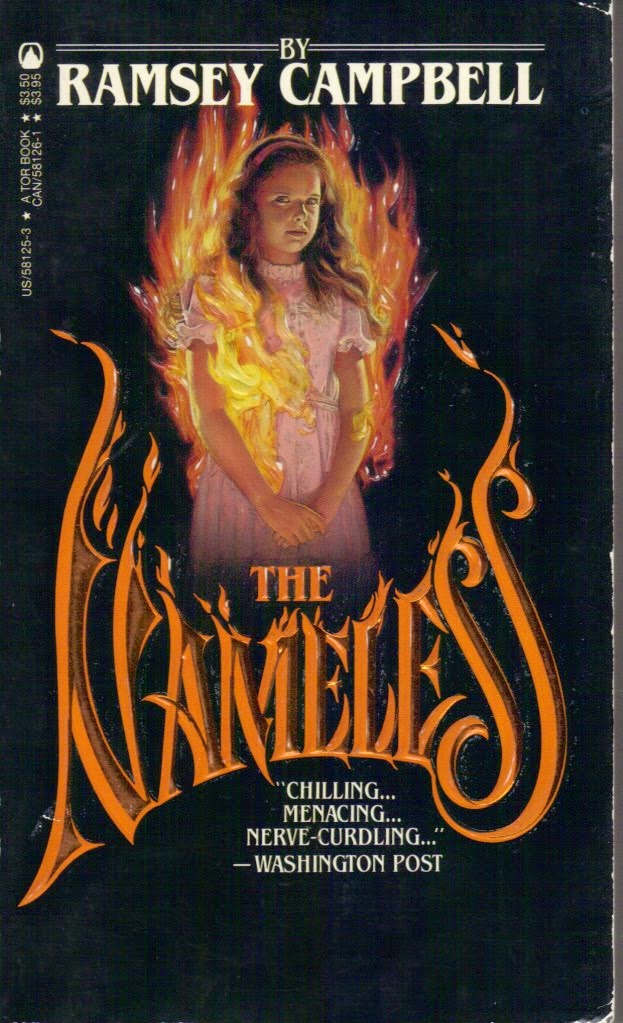 Now this is a classic cover for vintage horror fiction! Once the creepy-kid aesthetic (or is that cliche?) was set in stone with books and movies like The Bad Seed, Children of the Damned, The Exorcist, and Audrey Rose, it would be a long time before publishers could give it up. The image on this 1985 Tor reprint of Ramsey Campbell's 1981 novel The Nameless is perfectly precise: gaudy, tasteless, macabre. Little girl in her Sunday best! On fire! Staring at you menacingly like she doesn't even care about the flames! Fuck you, mom! I hate you, dad! 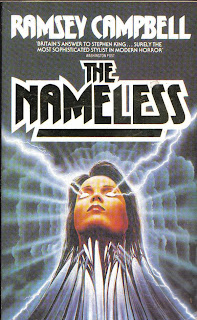 Honestly I was pretty underwhelmed by The Nameless when I read it about two years ago. A young girl goes missing, presumed murdered, and her mother grieves until mysterious clues start turning up that the girl might still be alive... somewhere, and is at the mercy of a perhaps mythical, murderous cult (ooh, the best kind!). It's not a bad storyline, but the novel is overly quiet and too understated. While that style works very well in Campbell's short stories, spread out over 300 pages it loses its power. I know this sounds terrible, but as a horror fan, the cult needed to be even more horrible! As I recall, the climax is quite muted and happens pretty much in the last two pages. The book doesn't have nearly the intensity that either of the paperback covers above suggests, and this original, tamer hardcover art (MacMillan, 1981) below is much more accurate. 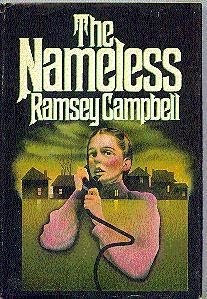 The Nameless was made into a similarly just-okay Spanish film in 1999, Los sin nombre. I'm working on tracking down more titles in this creepy-kid subgenre, particularly the classics, or "classics," mentioned above. 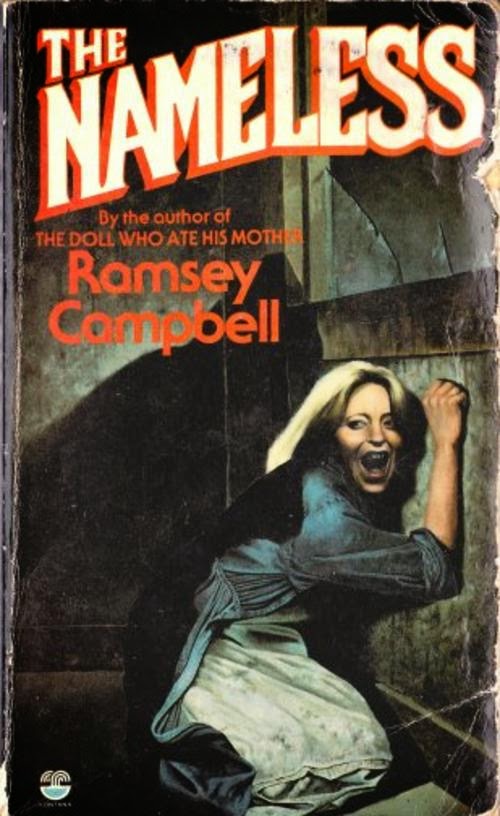 I was similarly underwhelmed by Campbell's "Silent Children"--which is, admittedly, one of the few Campbell books that I've actually read. I've heard plenty of great things about the man's work, but I have just not been able to get into him. What little I have read has not incensed me to seek out more. But maybe I should check out his short stories, if what you say is true...

The short story collections I have are Scared Stiff (which I haven't read since high school, uh, 20 years ago), Dark Companions, which I really liked and reviewed, and Cold Print, his Lovecraft stories, which I think are good but not great. Eventally I'm gonna reread that last one & post a review here. I did *not* like Demons By Daylight, his first original short story collection.

Ramsey Campbell is one of those authors that is considered a master of the genre but I just don't see it. Have read some of his short stories which are OK but not enough to call him a "master".

Wow, I've found myself amongst like-minded company here. Which is unusual when it comes to Mr. Campbell's work.
SO many folks have such wonderful things to say about him & while I've enjoyed a few of his short stories over the past three decades or so, I'm just not a real fan.
It's not that I actively dislike the man's work, mind you. He's obviously a very talented wordsmith. I just find much of his work incredibly difficult to get into.
I've attempted to read his novels at various occasions going all the way back to when I was about 15 with THE DOLL THAT ATE IT'S MOTHER & have honestly never managed to get past a couple of chapters of them.
Don't know why, just something about his style of prose that just doesn't agree with my palate I guess.

Several horror fiction bloggers I've come across have admitted ambivalence about Campbell's style. I can remember literally sitting in a high school algebra class where, instead of doing schoolwork, I was reading Campbell--but understanding little of what he was describing. I have a couple novels of his on my shelves but am a tad reluctant to try them. He definitely has his moments of perfection, but I fear his style, for better or worse, simply limits itself to a small coterie of fans. As King said, reading his prose is a little like being on a small dose of acid.

Not sure if you go back and read comments from your old reviews but just wanted to mention that you should really give The Face That Must Die a go if you already haven't. I found it a really chilling read with a refreshing touch of social realism. I then attempted other Campbell books but alas they all fell flat.
Matt

Matt, I have a copy of FACE on my shelf and plan on reading it for review here... someday!

Love your blog by the way Will. I discovered it only a couple of weeks ago and have read through all your reviews. Looking forward to hunting down some of these books now.
Thank you!