Look to the Sky Just Before You Die 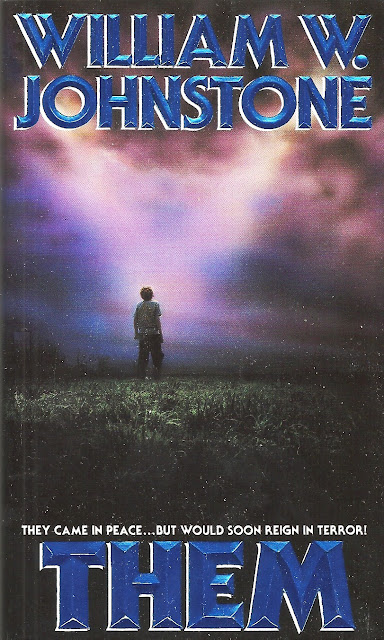 Prolific beyond belief, William W. Johnstone was born in Missouri on October 28, 1938. Although he didn't begin writing till the late '70s, his Zebra paperbacks were all over bookstore shelves for decades. His '80s horror novels featured some of the grodiest, gaudiest covers of the era. 1992's Them, however, is a subtler example, thanks to artist Richard Newton.

There were dozens of westerns and men's adventure novels from his pen as well. Johnstone died in 2004, yet somehow still manages to write and publish new books...

Posted by Will Errickson at 9:05 AM

I like how in the 80's Johnstone wrote books that exploited the "Satanic panic" fears of the era and now today his name is being used to peddle books about Islamophobic fears of America being taken over by Muslims thanks to our secret Muslim President.

William W. Johnstone used to be the apex of terrible writing. O' course, now that we have self-publishing and anybody can put out anything, there are people who make him look like Shakespeare... but, back in the day when there were actual editors and people who had to put up money to put things on the market, it was astounding that Johnstone not only got things in print, but so dang MUCH of it.

I never liked his work much, other than to laugh at it, but I always thought he gave hope to wanna-be writers out there. I know many times I could look at my own stuff and think, "This could be publishable, because, it may need a lot of work, but hell, it's already better than Johnstone's stuff..." Even reading the reviews of his books on Amazon are hilarious, because half the people who love them seem to be struggling with the English language, too.

They've pulled a V.C. Andrews trick with his name and have somebody else writing as him. Even while he was alive, he would take huge chunks of previous novels and stick them in "new" novels, just to beef up the page count.

Speaking of V.C. Andrews, one thing always cracked me up -- Andrew Neiderman ghost-wrote most of her "post-mortem" books, and for a long time you could find cover blurbs cross-pollenating on their books... like, you'd buy a Neiderman book and it'd have something like "'Andrew Neiderman is one of our greatest writers!' - V. C. Andrews" on the cover. I always thought that was a pretty hilarious in-joke.

I agree guys! From his website it's his nephew who's carrying on with writing, or perhaps "writing." Love the cross-blurbing, brilliant in a postmodern way.

I sure do like that cover, but after coming across this in a used bookstore and actually reading it… not good!

I saw that the author of this blog just read and reviewed his first book by Johnstone, and I agree with everything he said about Johnstone’s writing. Just. so. bad.

About the only good thing I can say about “Them” is that the premise is quite imaginative, even impressively so… but that’s what makes this not only a stinker but a tragic stinker: in other hands this might’ve been a better novel.