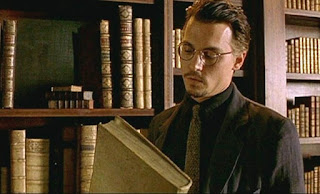 Anybody recognize any of these half-remembered short stories and novels?

1. The short story I'm looking for was from a compilation of about 10-12 stories.  I remember the cover was mostly black (big surprise there! ha!) with a small amount of line art in either red or white.  I think red, but I often remember colors wrong. Either way, the art was simple and not painting like. Scrawny teenager who grows into a well-built man over the course of a summer while working at a decrepit factory.  The story spoke about the bad vibes from the factory driving the young man's growth and how his newly strong body was somehow built of evil.  It wasn't really very horrific, but I remember liking some of the analogies and how they were worded.

2. I read this paperback in jr or sr high school sometime between 1976 and 1981.  I think the title was The Dark.  I also think the monster was named Harmon Quaid. The dark was darker than usual, and young ladies were disappearing/being murdered. Found! It's the novelization The Dark. 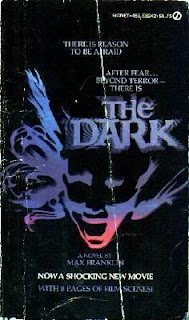 3. This book was paperback and had a beautifully designed cover the way many of these books had from the 1950's to the 1970's. I do not the date,publisher or author. This book was given to me as a birthday present some fifteen years ago in England when I resided there by a friend who is now deceased. I lost it with four thousand other books,half of our library because of the flood waters of Perfect Storm Sandy. Now,I believe the word Pan may have been a part of the title but I'm not sure. The one significant evidence I can offer of the book cover design is that at the top,not necessarily very top,of the design was what appears to be a naked baby but is actually an infant size man,bald with brown hair or black on the sides and back of his head,but the hair was most relevant on the sides. He had two little devil like horns and if I remember correctly he was smiling.


4.  Story unfolds from a father's perspective as he travels to visit his newly married daughter who was always pretty sharp and had some interesting ambitions, I believe they included some radical ideas involving psychology or something and she was pursuing research, had had some interview tapes or something. He finds her to be a completely different person, instead of his inquisitive, challenging daughter in pursuit of truth (she might have had a controversial thesis she was working on), she has become docile and dull, spending time engaged in domestic pursuits and watching daytime soap operas with her husband and inlaws who are equally boring. Turns out there's a mind-control program/ xperiment going on in this small town. They even have a factory that puts certain chemicals in canned foods, etc. and repackages them. Records are kept in the hospital with color codes and I think the police chief and others are in on it. The father discovers this, not sure how it turns out, I think they start trying to chase him down. Found! It's The Homing by Jeffrey Campbell. 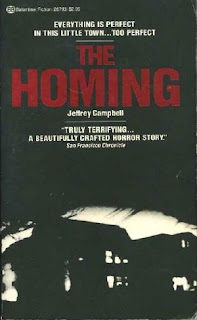 5. I remember it being about this girl who is kidnapped. She's in this old abandoned house with this man that isn't a man...he tells her that Santa rearranged is Satan....at one point she is tied to a bed and he sticks spikes under her toe nails? I seem to remember that she escaped...I think....I also remember that in the book she reads a book that ends up being about what happens (happened) to her.

6. When I was a kid, there was a paperback that sat with some other books in a hall closet. It had cover art that scared me so much that I dreaded anytime I had to open the door. I don't know the name of the book, but it was probably 1960s and certainly not newer than 1972ish. The cover art had a pair of women's (I think) shoes and the shoes had scary, moaning faces.

Posted by Will Errickson at 9:25 AM

I think 4 is The Homing by Jeffrey Campbell (who also wrote under the name Campbell Black).

Number 3 may be The Reaping by Bernard Taylor -- http://4.bp.blogspot.com/-sLOywIPpPOQ/TojXctTL8EI/AAAAAAAAEN0/X178BohD-mg/s1600/The%2BReaping%2B1980.jpg -- there's no hair, but sometimes memory can add things. Otherwise, it sounds pretty close. There's also a book called Pan by J. Birney Dibble -- I can't find a cover image for the copy I've got, but I remember it being some guy screaming with a bunch of red virus-type stuff coming from around his head... but, I did find this image of a different cover for that book - http://ecx.images-amazon.com/images/I/31k7i4fUskL._BO1,204,203,200_.jpg - which has some of the aspects of the description.

Not sure on #2, but there's The Dark by James Herbert, and there may have been a novelization of the movie The Dark - http://www.imdb.com/title/tt0079027/?ref_=fn_tt_tt_4 - but I'm not certain of that. But that's about an alien monster, so, I'm not sure it fits. Just a potential lead...

#2 might indeed be the novelization of the 1979 movie. Written by Max Franklin (pseudonym of Richard Deming). I haven't read it, but it's based on the original screenplay which had nothing to do with a killer alien. During mid-production, probably the same time Tobe Hooper left as director, the producers decided to change it from a psycho killer to a killer alien.

That was it! The guy looking for it sez thanks.

Maybe number three is "Mr Pye" by Mervyn Peake. (I haven't read it, but someone mentioned it when Joe Hill's book "Horns" came out, and now I'm taking a shot in the dark.)

I'm guessing the Satan/Santa thing has been used a thousand times, although the story I'm thinking of might have used Satan and *satin*. It was probably in either "Night Screams" or "I Shudder at your Touch."