Weaveworld by Clive Barker (1987): The Uses of Enchantment 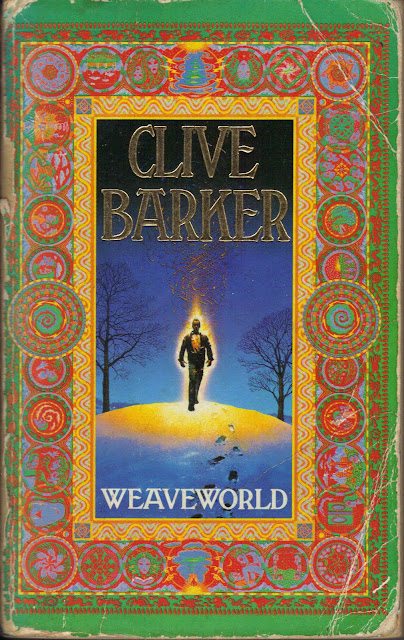 Only his second novel, Weaveworld shows Clive Barker already stretching as a writer of visionary horror fiction. At an epic 700 pages, it is an ambitious, genre-straddling work, evoking William Blake, Lewis Carroll, Jorge Luis Borges, and other fantasists and magic realists rather than the outright horror of Books of Blood and his first novel The Damnation Game (1985). Later titles like The Great and Secret Show (1989) and Imajica (1991) would find Barker continuing in this particular blend of fantastical worlds filled with both guttural horror and transcendent beauty - as well as splendidly perverse eroticism. 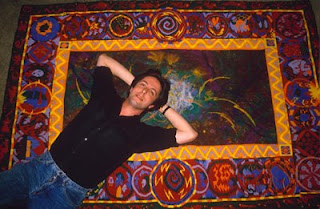 True to its title, there is a world woven into a carpet, a carpet which comes into the hands of Cal Mooney, an ordinary young man whose life in Liverpool seems to drift aimlessly. Called the Fugue, this world is inhabited by a race of mythical people known as Seerkind who through history had been viciously hunted by man (Cuckoos to the Seerkind), but have spirited themselves into this carpet to escape persecution. The human guardian of the Weave has fallen ill while several evil forces, led by exiled Seerkind sorceress Immacolata, attempt to destroy it.

Every inch of the carpet was worked with motifs. Even the border brimmed with designs, each subtly different from its neighbor. The effect was not overbusy; every detail was clear to Cal's feasting eyes. In one place a dozen motifs congregated as if band together; in another, they stood apart like rival siblings. Some kept their station along the border, others spilled into the main field, as if eager to join the teeming throng there... its colors as various as a summer garden, into which a hundred subtle geometries had been cunningly woven, so that the eye could read each pattern as flower or theorem, order or turmoil, and find each choice echoed somewhere in the grand design. 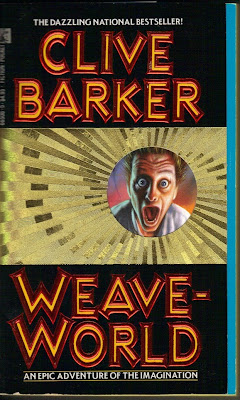 This first edition of the US paperback has some pretty ridiculous cover art. There are a couple recognizable characters but on the whole I prefer the UK edition at the top, which clearly, and cleverly, incorporates specific images, people, places, and events from the novel into a carpet-like design. More cover artwork from around the world can be found here. 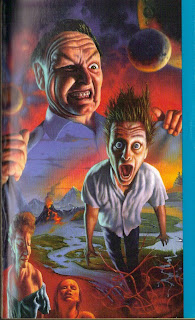 Barker has always spoken of the "subversive" qualities of the imagination, of its ability to save us from banality and a stifling status quo, and that's precisely what happens to Mooney once he's swept up into adventure. Weaveworld may not be Barker's best work - in his introduction to the 2001 edition he writes he was "on occasion irritated that [the book] found such favor among readers when other stories seemed more worthy" - but I certainly have enjoyed reading it several times over the years. And as a prose stylist Barker is unmatched; it's simply a pleasure to read his writing in a way not usually common in the genre.

Ahead there were such sights unfolding: friends and places they'd feared gone forever coming to greet them, eager for shared rapture. There was time for all their miracles now. For ghosts and transformations; for passion and ambiguity; for noon-day visions and midnight glory... 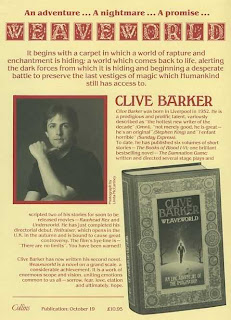 There is more than a touch of sentimentality, but Weaveworld is a good recommendation for people who don't enjoy straight-up horror novels. "That which is imagined need never be lost," Barker writes, intimately understanding the value of imaginary fiction and storytelling. People are enchanted by the myths and fairy tales woven into our cultural subconscious over the ages, and the most useful of all are not those that allow us to escape our nature, but the ones that dare to confront it directly; Weaveworld is one of those indeed.