Still Dead: Book of the Dead 2, edited by John Skipp & Craig Spector (1992): Everything that Dies Someday Comes Back 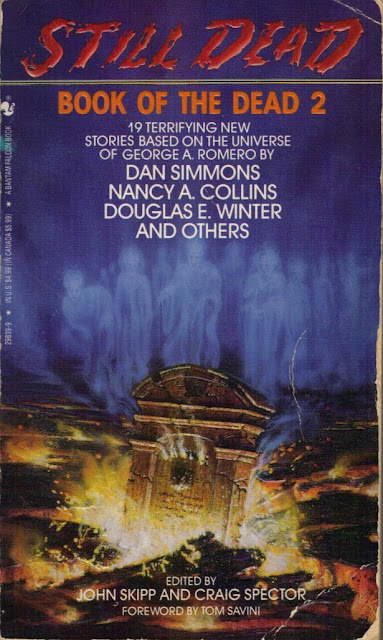 What distinguishes Still Dead: Book of the Dead 2 from its 1989 predecessor? Easy: better stories, better writers, more gore, weirder gore, surreal gore, and women. It really is that simple. In the three years that separate the two John Skipp and Craig Spector-edited zombie-thologies, in which every story is contained within the George Romero universe of zombie hell, several female horror writers had published well-received shorts and debut novels. Kathe Koja, Nancy A. Collins, Elizabeth Massie, Roberta Lannes, and perhaps most well-known of all, Poppy Z. Brite, are all accounted for in Still Dead, and it makes all the difference. Their stories here are original, inventive, risky, and astonishingly well-written. Nobody's trying to self-consciously out-gross anyone else, or prove how splatterpunk they are, or show how flip and casual they can be about brain-eating, dead children, and evisceration. Thank zombie Jebus for that. 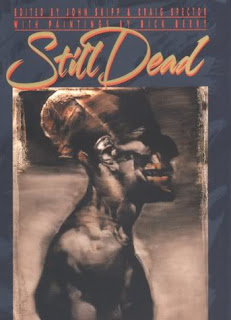 To wit: Massie gets down-home with graphic zombie sex in "Abed," and Collins brings the goth-punk kids to the show in "Necrophile." Koja's "Prince of Nox" imagines the other side: her protagonist becomes a zombie who, sadly, still maintains some semblance of sentience and goes on a quest to rescue his damned brethren. Nancy Holder presents a liberal zombie-theology in "Passion Play," in which an old German town wants to use a zombie as Christ in its traditional performance so it can be truly and literally crucified. Nice little Easter-appropriate twist at the end, too. 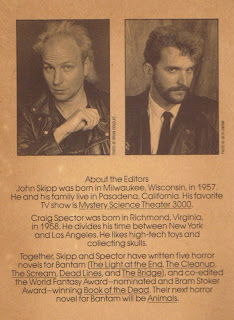 The lead-off story, "The Old Man and the Dead" from Mort Castle, by whom I've never read anything else, is one of my favorites in modern horror. Prefiguring the current bestselling craze of melding zombies with classic literature, Castle imagines a man - quite obviously Ernest Hemingway if you paid attention in your first-year literature class - who encounters in Spain the horror not of World War I, but of the walking dead.


"I don't think I like this," Adam Nichols said. "I don't think I like it at all."
"I am sorry, but what you like and what you dislike is not all that important, if you will forgive me for saying so," Miguel said. "What does matter is that you are a good shot. You are one of our best shots. So, if you please, shoot some of these unfortunate dead people."

Love. It. Douglas E. Winter returns with another grim parody of (then-) contemporary hip-lit, "Bright Lights, Big Zombie" (You are not the kind of zombie who would be at a place like this at this time of the morning), and Dan Simmons, a schoolteacher before becoming a full-time writer, takes "This Year's Class Picture" to autobiographical heights (or depths). The surreal gore turns up in Brooks Carruthers' "Moon Towers," to which I still remember the climax 20 years later; famed cartoonist Gahan Wilson has "Come One, Come All," a sort of Bradbury/Sweeney Todd mash-up, and Skipp and Spector themselves present an odd poem, "The Ones You Love."

But really this tome is owned by "Calcutta, Lord of Nerves," Poppy Z. Brite's darkly poetic rumination on the nature of zombiedom and a strangely beautiful city besieged by filth and decay both natural and not. There's no real plot, just a decadent, luxurious, and deliciously gross sensibility:

The dead like pussy too. If they are able to catch a woman and disable her enough so that she cannot resist, you will see the lucky ones burrowing in between her legs as happily as the most avid lover. They do not have to come up for air. I have seen them eat all the way up into the body cavity. The internal female organs seem to be a great delicacy, and why not? They are the caviar of the human body. It is a sobering thing to come across a woman sprawled in the gutter with her intestines sliding from the shredded ruins of her womb, but you do not react. You do not distract the dead from their repast.

It's this sort of acceptance of horror and death that makes the tales of Still Dead believable, makes them linger, makes them sting; despite their visions of the human body in extremis, these stories are still about people, about men and women who matter-of-factly witness the worst the world has to offer, and continue on. It's not just the the dead who come back; it's living people too.

But I'm still not crazy about this cover, either.
Posted by Will Errickson at 5:52 PM

thank you. glad you used that passage from the Brite piece. excellent.

Finally got to use it - I've had it marked since I first read it back in Ye Olde Daye. My copy is about falling apart. Funny to say, but the stories in this anthology are... fresher... than the first.

Hey Will, I just discovered this wonderful little site of yours a couple of weeks back & I'm enjoying the hell out of it.
Even though I disagree with your takes on a fair amount of things ( & really, what fun would total agreement be anyhow? LOL ), Like Robert McCammon's work for instance ( which I took the time to comment on as you may have noticed ), I've been having a helluva lot of fun digesting the site's contents.
Not only are your critiques all well thought out & interesting, but the cover galleries are a blast.
As a book collector as well as a voracious reader, I love seeing all the images of things that I don't have ( especially appreciated are those of the vintage paperbacks, things I can NEVER get enough of! ) & even of all those that I do. Books that have been tucked away in the back of my shelves that I haven't had occasion to look at for years. Like the Ramsay Campbell collection...

By all means, keep up the great job.

Oh, BTW, a few words about the book in discussion...

Haven't read this one, nor do I own a copy ( though I did quite like the original when it came out back in '89 or '90 ), it must've just slipped past my radar when it was published. Now, based on your review, I'm going to have to make it a point to hunt down a copy.

That's another thing that I have to give you credit for. Since discovering this site, I've definitely become more interested in genre fiction than I've been in a while. I mean, REALLY interested. As in, rather than just grabbing something from my TBR pile as per usual, now you've got me really PLANNING my reading again & focusing on filling in gaps in my collection.

Jim, I really appreciate the kind words. Always good to know there are like-minded folks out there when it comes to vintage horror. Disagreements are cool too, I dig hearing other views on stuff I dismissed or loved. If you come across a title you think would be good for the blog, just let me know, as I am always looking for works/authors I've missed.

Im actually new to Koja's work and it turns out .. I shouldn't have been. She's been around for awhile. I can't believe the decades I've ignored her, what I fantastic writer!!