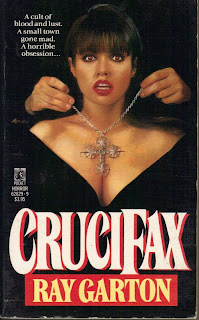 A luridly sensual cover for a book that took me some time to track down in good condition; I couldn't even find a cover image online of Ray Garton's Crucifax. It was somewhat notorious in its day not for what was there, but for what wasn't: a chapter describing in graphic detail an extremely monstrous and bizarre abortion. Originally published in 1988 by small press publisher Dark Harvest in hardcover under the title Crucifax Autumn, the paperback publishers, Pocket Books, got nervous at such a depiction and edited it from this June 1988 edition. However, this censored chapter was widely published in 1990 in Paul Sammon's anthology Splatterpunks. 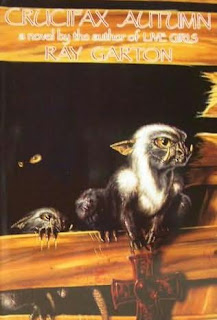 Crucifax concerns an underground Pied Piper/Manson-esque figure haunting the streets of the San Fernando Valley looking for disaffected teens. And lord, there's plenty; one even has raw, forbidden dreams about his pretty young sister as the back cover so charmingly puts it. Garton, as I've mentioned before, published paperback originals with copious amounts of sex and violence but had a bit of a social conscience too, so you didn't entirely feel like taking a shower after reading one of his books.
Posted by Will Errickson at 2:51 PM

Yes, a difficult-to-find edition this one. I enjoy Garten's work very much.

I need to track down his earlier works, SEDUCTIONS and DARKLINGS. I had SEDUCTIONS back in the day after I read LIVE GIRLS but I think I ended up just trading it in somewhere but never read it. Really cool cover so I can't wait to pick it up again.

It's great to see a little love thrown in the direction of these golden oldies. Thanks!

Will, somehow I managed the good fortune to accumulate all three of these Garton paperbacks for my collection. CRUCIFAX, SEDUCTIONS & DARKLINGS.
The latter actually being quite the nice little chiller. Of the three, it's definitely the stand out IMO. And, I'd also highly recommend his novel DARK CHANNEL.
It doesn't look like much on the outside & the cover sypnosis caused me to pass it by for a couple of years back in the early '90s. But then, I got on a bit of a Garton kick after reading his short novel MONSTERS in Berkley's THE BONE YARD ( their PB version of number 6 in the awesome DARK VISIONS series, each & every one of which are great IMO ). Which was an absolutely terrific piece of work by him & among my all time fav short novels.
Anyhow, that led me to DARKLINGS & then, I finally decided to give DARK CHANNEL a try & it was much MORE than worth my time & money.

Good to know! I had a few of those NIGHT VISIONS anthologies and liked them--that's where Barker first published "Hellbound Heart"--but haven't run across them used in ages. I have seen DARK CHANNEL a lot but I also gave it a pass when it was published. Always happy to hear about more worthwhile stuff I overlooked...

Cool cover, but the Spanish one is much more interesting