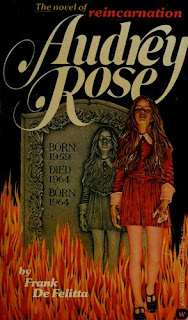 I have never had any interest in reading Audrey Rose, one of the quintessential bestselling horror novels of the mid-1970s. When I worked in a used bookstore in the late '80s it seemed everybody wanted to trade in their busted-ass copy; we had dozens of them (along with other '70s moldy-oldies Jaws, The Flame and the Flower, Jonathan Livingston Seagull, and Love Story - that last title many Americans' sole enriching literary experience of the decade, Harlan Ellison once said). "A novel of reincarnation" makes it sound more like "housewife horror" to me than anything cool, bloody, or really fucked up. I was probably inclined to think so by Stephen King, who wrote in Danse Macabre (1981):

Most of them [horror novels] are just downright bad, and I have no taste for the job of beating the field's most spectacular violators with their shortcomings. If you want to read John Saul and Frank De Felitta, go right ahead. It's your three-fifty.
Three-fifty?! Ha. To this day I have no idea who author Frank De Felitta is or what happened to him. I certainly don't think of him as a forgotten horror novelist awaiting rediscovery. Sorry, Frank. Blame Stephen King. Blame the decidedly mediocre film version. But little girls on fire--! Man, after The Exorcist, everybody must've hated 'em. I cannot deny the creepy, malevolent, and unsettling image of Audrey Rose herself on the cover of the book, which I'm sure many folks my age remember sitting on their mom's nightstand or taking up the racks at the grocery store. I know I do. And that makes for some good vintage horror cover art. 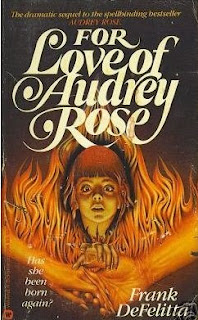 I read this one a few years back...I've even got a review floating around the archives somewhere. One of these days I'm going to have to dig it out and type it up. From the very few books that I've read by de Felitta, he's not as bad as some people (King included) have made him out to be. Sure, his writing is very dense and very graphic, and sometimes quite vulgar, but overall it made (for me at least) a pretty disturbing read.

Incidentally, I do have a review for his book The Entity on my blog, if you're interested.

(Really loving the blog, BTW. It's about time literature got its due on the horror blog circuit. Kudos to you!)

Oh, right, The Entity! Recently saw the movie, which wasn't bad at all. Glad you're enjoying the site, thanks!

I definitely read this one once upon a time! Haven't a clue what I thought of it, but I actually rented the movie from the library just last week! (The VHS cover, by the way is not nearly as much fun as this paperback!) I had gotten rid of my VCR years ago, but a friend gave me his recently. I was going to try to pick some VHS up from ebay/craigslist etc but someone suggested I check out the library. They had tons of good stuff! Seemed like most of the horror selections they had were based on books too! The library is a goldmine of untapped movie reviewing! And apparently they have books there too!

I was really impressed with myself when I was 8 or 9 years old because I read Audrey Rose and it was about 3 inches thick. I read it a couple of times, even. It's not really a bad book (it's GREAT if you're 8!) but nothing to really write home about.

The girl on the cover, by the way, is Brooke Shields. She posed for the cover art. I always thought it looked like her, but got it confirmed by a friend recently.

I just read his The Entity, and loved it! I will look out for Audrey Rose now!

See my review on my blog here:

Thanks Larry. I've seen both movie adaptations, and THE ENTITY wasn't too bad at all. AUDREY ROSE... uh, no thanks!

I loved this one and think of it from time to time with affection, but of course only limited respect. It brings back that whole era and the many other cruddy horror stories that came with it, like "Disturb Not The Dream," "The Amityville Horror," "The sentinel" and "Unholy Child." Sigh.