The Djinn by Graham Masterton (1977): Jean Genie Let Yourself Go! 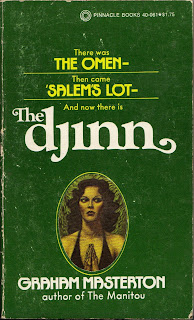 It's the return of Harry Erskine, Graham Masterton's dry-witted, comic-hardboiled phony "clairvoyant," first seen in the masterful The Manitou. This time Harry's tangling with The Djinn, an Arabian supernatural entity (from which we get the English word "genie"). But this is no lantern-bound wish-granting jokester; it has 40 monstrous manifestations and they're all, well, fatal for humans. A slim and economic 200 pages, you can read it in one night whilst enjoying its vintage-y paperback horror goodness, as seen in its inside cover: 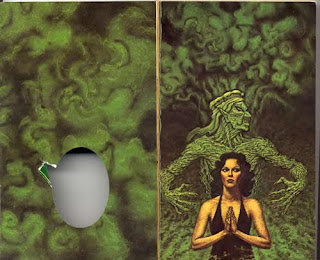 Art by Ed Soyka. Thanks to The Cover Art of Graham Masterton

It begins with the funeral of Harry's godfather, Max Greaves, who committed a horrendous, self-mutilating suicide. Max was a respected amateur scholar and collector of Islamic artifacts who, in his last years, grew increasingly cantankerous and paranoid. Max's widow Marjorie unsettles Harry when she tells him Max wanted their house, a rambling old Cape Cod estate called Winter Sails, burned down, along with all the Arabian artifacts inside, after his death. One item in particular, a very large jar decorated with eyeless horses that Harry remembers from childhood visits, is now locked away at Max's insistence. But with the help of the foxy-eyed woman Anna who shows up at the funeral (whose pants Harry is dead-set on getting into), a Middle East folklore professor, and an old doctor, we get to the very black heart of this Arabian mystery. 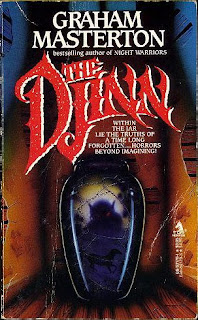 Brimming with pseudo-scholarship and ancient mythology - for which I'm a total and complete sucker when featured in horror fiction - Masterton's novel is simple and fast-moving. Passages about the fearsome djinn and their unholy powers fascinated me. They are also utterly repulsive in that outrageous '70s way:


"The Arabs used to say that Ali Babah had made a pact with a strange and evil sect of necromancers who lived in the hills. These wizards performed extraordinary and quite obscene rites, one of which was said to involve carrying around a young girl on top of a long pole which had been pushed through her vagina. This sect is sometimes known as the N'zwaa or the Unswa, and sometimes by an unpronouncable name which means Those-Who-Adore-The-Terrible." 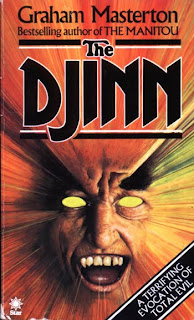 Star UK edition 1977
Oh hells yes. You can probably guess at some of the mayhem that's coming. Or maybe you can't. Masterton writes without extraneous plot or detail, but with lots of corny/snarky comments from Erskine (Not that I was frightened or anything like that, but I prefer to meet the supernatural on my own terms - in broad daylight, with running shoes on), entertainingly clunky dialogue from everyone else, and a mounting dread that culminates in a graphic and bloody good climax. The Djinn is no Manitou, but it's certainly a fun, though minor, example of '70s horror fiction (comparing it to 'Salem's Lot is of course ridiculous). Thanks again, Graham! 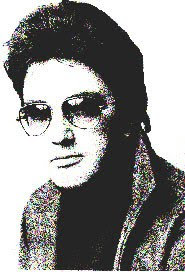 Mr. Masterton
Posted by Will Errickson at 5:33 AM

Masterson is a god.

I have a fondness for this book, for all its hokiness. I have both the TOR and Star versions you picture. Masterton always seems to channel Erskine rather well, and AFAIK this is probably the only Erskine book without Misquamacus as the prime evil!

He really looks like some sort of Roy Orbison/Elvis Presley hybrid in that photo...

This is one of the few Masterton books I didn't like.

I don't remember it that well, but my recollection is that all the interesting bits were backstory from a thousand years ago and nothing much happened in the modern day story until the end,

when the djinn killed a woman by jumping into her body through her vagina. An odd horror death, to say the least.

I Loved this book! Actually I enjoyed it more than The Manitou.