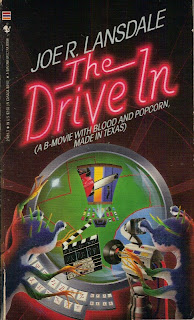 A genre unto his ownself, Texas-born-and-bred Joe R. Lansdale is the author of crime novels that up the ante for violence and cruelty, horror novels and stories that mine the blackest vein of humor and perversity, Westerns turned inside out as well as award-winning mainstream fiction. And The Drive In and The Drive In 2 are a bewilderingly weird combination of all of the above. I think if Joe Bob Briggs wrote novels this is how they would turn out: gory, grim, gleefully outrageous, and obsessed with bad movies, written in a down-home, vulgar, smart-alecky drawl: Had I been Jesus Christ, I'd have come back from the dead, made myself big as the universe, gotten the world between two bricks, and whammo, shit jelly. 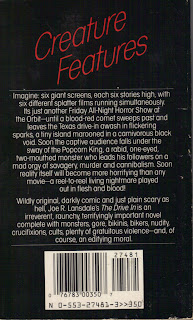 I was lucky enough to discover them in 1991 after reading Lansdale's debut novel, The Nightrunners. The two books are sadly out-of-print in their wonderfully colorful Bantam Spectra "science fiction" editions (which I found in mint condition in a comic book store ages ago), but are back in print in a new collection that also includes a third volume, which is brand-new and I have not read. 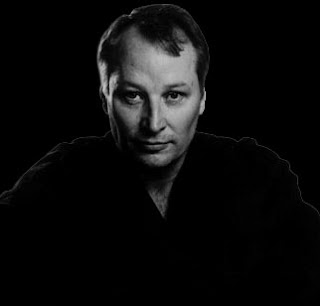 A meteor unlike any ever seen (The comet smiled. Split down the middle to show us a mouthful of jagged saw-blade teeth) swoops down and then disappears over The Orbit, an enormous six-screen drive-in move theater specializing in horror and exploitation movies on Friday nights in a small East Texas town. In its wake it leaves The Orbit seemingly hanging in outer space, an island adrift in an utter blackness that fries anyone who tries to touch it into a vomitous goop. What follows is an outrageous horrorshow in which the movies that play over and over (Texas Chainsaw, Evil Dead, Night of the Living Dead, etc.) on the enormous screens cannot hold a candle to the horror the characters are now trapped in. It's a bit like Stephen King's "The Mist" except not quite as dreary but still as existentially, well, fucked. People start to get a little crazy - which, in a Lansdale novel, means a lot crazy. 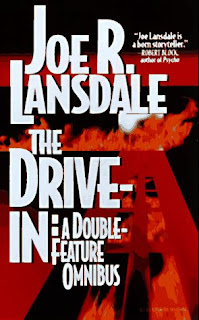 Horrible cover from Carroll & Graf, 1997, but at least they brought it back in print awhile

Lansdale scores some easy points with his narrator's attempts to find meaning in a universe that would let something like this happen ("Give me something to blame this on. A random universe with no god, evil or otherwise, is just too much for me"), but hey, Jack is only 18 and two of his buddies have been struck by strange lightning and fused into the Popcorn King, an insane demi-god that promises salvation to those who'll worship him. But once Jack decides it's tentacled aliens shooting their own movie, his much more level-headed friend Bob tells him, "Always got to have something to believe in, don't you, Jack? Astrology, Christianity, now B-movie gods." Bob and Jack figure out a way to escape The Orbit, but end up crucified for their pains. 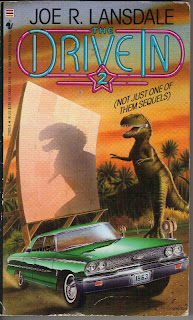 Picking up right at the end of the first book, The Drive In 2: Not Just One of them Sequels introduces dinosaurs on the loose, carnivorous film stock, and a young woman who, adept at martial arts (like Lansdale himself), survives The Orbit apocalypse but meets up with Popalong Cassidy, a monstrous dude that maybe could have stepped whole and breathing from Videodrome. Now the world seems to be on a soundstage existing for the pleasure of alien filmmakers. Really. Truly. 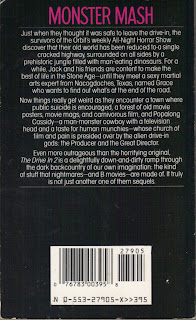 I don't know if I'd recommend reading these two back-to-back, for as much as Lansdale can be ridiculous and satirical with his characters trapped in a cartoony, absurdist nightmare, he doesn't shy away from the uglier, more realistic depictions of people pushed to extremes. It got kinda overwhelming actually. Still, The Drive In and The Drive In 2 really are unique in the annals of horror fiction; a two-shot bizarro sci-fi/pulp horror/apocalyptic-comic paean to trash culture in a world that's probably forgotten what "double feature" even means.
Posted by Will Errickson at 12:45 PM

Damn...definitely going to have to check these out! Thanks, Mr. Errickson!

Ashamed to admit it, but haven't heard of Lansdale till now. He seems like my kind of guy - I'll keep an eye out for his stuff the next time I'm at the used bookstore. As always, thanks for the tip!

Thanks for reading everybody. I haven't kept up with Lansdale; he's been writing crime novels for about 15 years now. But if you wanna read him I know a lot of his stuff has been reprinted just recently. Glad it's all available again, but goddamn I love my vintage paperbacks!

I love Lansdale more than what is probably good for my health. His razor wit just blends in so well with the pulpy and insane trappings that he adorns his stories with. Truly a writer like no other. Thanks very much for the write up, Will!

Glad you liked it! Back in the day when I saw PULP FICTION, that scene where the Gimp pops out of a box, the audience gasped in utter shock. I, however, simply thought, "Well, I've seen crazier shit in a Joe Lansdale novel."

I've had no luck finding these ones and I really do want ot read them, drives me nuts!

I've not read these, but do remember seeing them in Waldenbooks a number of times. They sound really good.

In the early '90s I had to shell out big bucks for the hardcovers; wasn't till years later that I found them, in brand-new condition, in a comic book shop. Huzzah!

I remember checking out the first one (with that cover!) out of the library because I liked the "Subway Jack" story he did for a Batman anthology and read it in its entirety while sick with a cold on my grandmother's couch...It's not that often I can remember not just a book but also where and when I did. This was one of them. What a truly mind-warping experience this was for my 13 year old self.

(Just discovered your blog and this is turning out to be a real blast to see how many books you're covering that I've read during my teen years. I'm afraid I'll be replying to a couple of more of your months-old entries!)

Kevin, please do! It's just that sort of experience that was a major impetus for me starting this blog in the first place.

Popalong Cassidy's backstory is some seriously dark, affecting stuff, I was on the verge of tears reading it.

And the fact that the character is an inherently ridiculous thing, a cowboy with a TV for a head sums up what makes these books brilliant, they offer cheesy B movie thrills but hit you with some shockingly disturbing and heavy stuff.

Did you ever get around to reading the third one? The 20 year gap makes me skeptical, it kinda feels like Lansdale probably said all he needed to say with the first two, I'd hate to try it and be disappointed though I'm obviously curious.