Night Shift by Stephen King (1978): Take My Hand As the Sun Descends 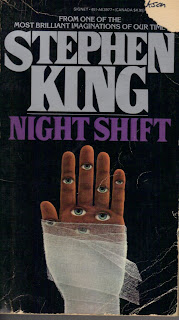 I don't know if there's a collection of horror stories that I recall as fondly as Stephen King's Night Shift, which brought together many of his early '70s works originally published in men's magazines like Cavalier, Penthouse, and Gallery. How many school nights did I stay up late as a teenager, engrossed and amazed by these perfectly composed tales? How many times did I attempt my own versions, getting maybe six paragraphs in before realizing I might be a better fiction reader than fiction writer? 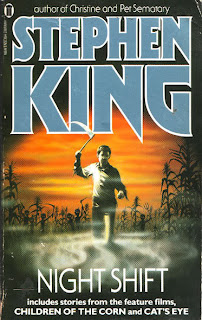 I have no idea what happened to the paperback copy that I had back then; I just found this one (at top), the same printing, same cover, and realized I wanted to write on such an influential book. After a laudatory welcome by crime writer John D. MacDonald, King's introductory essay set the stage for his later Danse Macabre, an informal look at horror literature, what it is, what it does, why it works and why we love it in a world that holds enough real-life horrors on its own.

I can hear my wife as I write this, in the next room, crying. She thinks I was with another woman last night.

And oh dear God, I think so too. 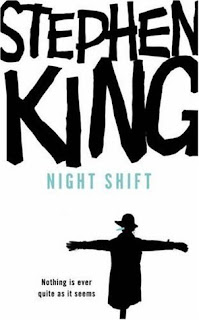 Those are the final lines of "Strawberry Spring," lines I only recently reread, and rereading them caused the hair on my arms to stand up: I realized they'd been rattling around in my head and haunting me for over two decades; in their cadence and finality, in their sad and terrifying irony, the revelation and bitter acceptance of madness and murder. Horror writers work hard to get that last line just right, to get that tone, to save up through the whole story so they can sucker-punch you at the end. But it's not really a sucker-punch, though, is it? We know it's coming, we want it, we're reading the story - if not the entire genre - for that. 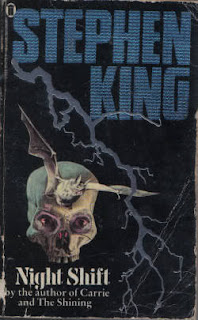 Writers like Charles Beaumont, Frederic Brown, and Gerald Kersh, though largely forgotten today, specialized in these kinds of short stories; crafted brief gems of suspense, weirdness, and outright horror. They're good models to have and King has often sang their praises. "Jerusalem's Lot" is a terrific riff on Lovecraft's "Rats in the Walls," set in the 1850s and told in epistolary form. "I Am the Doorway" is science-fiction horror with another one of those precise and chilling final lines, and provides the paperback's striking cover image (none of the many reprints of Night Shift through the '80s, '90s, and today can match it). "One for the Road" - now there's a phrase you don't hear anymore - takes place in 'Salem's Lot, the doomed town of King's second novel. 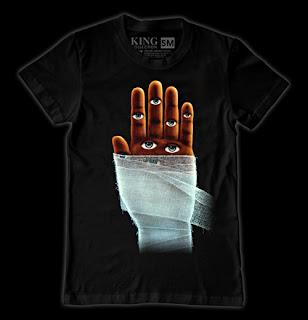 Then you've got your vengeful "Quitters, Inc." and "Sometimes They Come Back," morality tales that bring back memories of Twilight Zone but are a bit uglier. Suspense-filled ones like "The Ledge" and "Battleground" could have been on the old Hitchcock show, while "The Mangler," "Gray Matter," "The Boogeyman," and "Graveyard Shift" are straight horror, pulpy and ridiculous but with that sense of the quotidian that King excels in which grounds them; the Wicker Man-esque "Children of the Corn" was the basis for the inexplicably popular horror movies, while "Trucks" served for the best-forgotten Maximum Overdrive. "Strawberry Spring," probably my favorite, takes place on a Northeastern university campus that is terrorized by the murders of several of its co-eds (ah, the '70s!). Not supernatural in the least, it still manages to unnerve the reader in its depictions of regular people trying to live regular lives while a monster is in their midst - prime King, of course; prime, and untouchable. 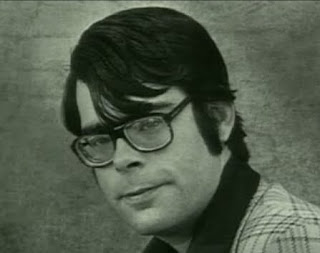 Wow, I could not have summed up this wonderful collection any better. Nice job.

Thanks, man! I felt like tackling this one was a must; I certainly could have written even more on it.

A great collection of King's work, indeed. In my opinion, I think it's probably his greatest collection. I feel like his early days were darker and more daring in comparison to his stories from more recent years. The little girl from "One For The Road" made me close the book and run from the room when I read this in middle school! =O

Joe, I had pretty much the same reaction to Danny Glick in the original SALEM'S LOT novel, when he appeared outside Mark Petrie's window! Thanks for stopping by.

Wow, I just literally read that scene in Salem’s Lot and even though I have read the book before and am almost twenty seven years old, it freaked me out. Then again, if his work wasn’t amazing I would have no reason for rereading it all again.

I love this collection and Nightmares and Dreamscapes over his others. A short story called "Nona" and "Strawberry Spring" stand as my favorites from him. The imagery, atmosphere and dark realism in both is awesome.

A great testimonial for this collection. I'm still partial to Everything's Eventual for some reason, but it is an embarrassment of riches when thinking of Stephen King's short story collections. Skeleton Crew is probably a wee-bit higher on my faves list than Night Shift, but why split hairs.

By the by, I added a link to this review to my own, so other folks might be inclined to visit too.

This was my first King anthology; I found it in my high school library, devoured it, and loved it so much that I still have it after all these years.
Swoon.

Great collection. I first read it when I was maybe 11 or 12 and several times since. The thing I think of most is how viscerally I reacted to the stories and still do. You mention the hair standing up on your arms when you read that line from "Strawberry Spring"? I had that exact reaction as I read the line here just now. After reading "The Boogeyman" as a kid, I had to sleep with the light on for days. I still get teary reading "The Last Rung on the Ladder", which isn't horror at all, unless you count the horror of existence. Other standouts for me are "The Man Who Loved Flowers" and the aforementioned "The Ledge". Some of King's very best work.

Reading this taught me so much about the craft of writing. Every story is a masterclass in creating a situation with a few deft, carefully-chosen scenes, then progressing the narrative to an unexpected-yet-inevitable conclusion while quickly sketching in just enough backstory and worldbuilding to sustain the illusion. King's stories neatly hint at hidden depths, allowing them to seamlessly grow into the spaces in your own imagination so that you feel like there's so much going on without his needing to waste a novel's worth of words on exposition.

(Since just gushing is pointless, I'll give an explanation: "I Am the Doorway". There's actually very little in the way of answers here--King doesn't explain what the entity is, what it wants beyond the most basic and perfunctory of motivations, how it achieves its goals, or what the rules are that govern it. And yet, because of the wonderfully evocative way he hints at those things, it feels like you're seeing the shadows of something more terrible and vast than can be described rather than an incomplete or unfinished work. That kind of glamour is exactly what a good writer of short fiction must learn to cast.)

OK, not my blog, just one I'm a huge fan of, so I'll shut up. But thank you so much for reminding me how GOOD this book was.