The sadly non-prolific T.E.D. Klein published his only novel, The Ceremonies, in 1984. 1984! His second book, a year later, the collection Dark Gods, is comprised of novellas written the decade prior. He was, however, editor of Twilight Zone magazine, which published well-respected short horror stories until its demise in 1989. Although all of his fiction is set in the modern era, its care and subtlety hearken back to late 19th/early 20th century masters like M.R. James, Arthur Machen, Algernon Blackwood, Sheridan Le Fanu, Lovecraft, etc. Modern purveyors of this style work in what has been dubbed "quiet horror." Ramsey Campbell, Peter Straub, Charles L. Grant and Dennis Etchison are all familiar names in this sub-genre. These writers pride themselves on creating moods and atmospheres, a sense of awe, mystery, providing chilling intimations of fear and dread rather than, as Stephen King once put it, "going for the gross-out." 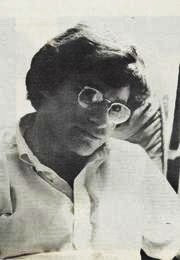 I quite like the Bantam cover of Dark Gods at top: out of a vast stormy sky an inchoate face, raging, fanged, demonic, a living darkness threatening a solitary rural house (it's from "Petey). The covers are larded with the kinds of blurbs from reviews any young writer would kill for. The first novella, "Children of the Kingdom" (originally published in the game-changing anthology Dark Forces in 1980), takes place in the midst of the infamous New York City blackout of summer 1977 at an old folks' home where the narrator's grandfather lives. Slowly and surely Klein builds the atmosphere, dropping hints and clues throughout, mixing vague supernatural dread with real-life threats caused by the blackout. The sewers of New York, it turns out, harbor more than just baby alligators, and roving gangs might not be from the next block over. 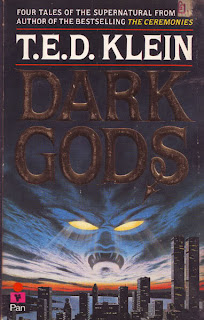 "Black Man with a Horn" (1980), one of Klein's most lauded stories, has as its narrator an old horror fiction writer who once knew Lovecraft himself. After a chance meeting with a nervous missionary returning from Malaysia on an international flight, the narrator learns the true meaning of a horrific bogeyman from ancient myth - myth he thought was made up entire by Lovecraft and his fellow circle of Weird Tales writers. Bookish and self-referential, "Black Man with a Horn" is similar to the works of Thomas Ligotti; it is both a sly, ironic meditation on the art of horror as well as a creepy, satisfying story on its own. "Petey" and "Nadelman's God" are the two other quite good novellas included, both worth reading; virtually all are whispery and mythic, tinged with nightmarish imagery, and even touch on tensions between urban and rural, upper class and lower, age and memory. Nicely done, Mr. Klein. 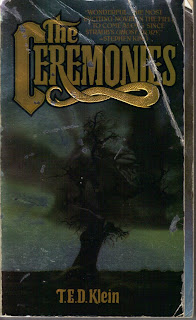 But I was little taken with The Ceremonies; all I can recall of it two years later is the sense of disappointment I felt while reading it. It is based on his acclaimed novella "Events at Poroth Farm" (1972), which, sadly, is not included in Dark Gods (it can be found in Year's Best Horror: Series II). That's one of the problems I had with The Ceremonies - it absolutely felt like an expanded short story, overstuffed and at times, simply boring. Another bookish narrator, a college professor who repairs to a farm in rural New Jersey to read Gothic literature to prepare for his upcoming class. But the countryside proves less restful than imagined. Of course it does! Perhaps my taste runs more towards bloodier, more intense horror than I think it does; maybe Klein's reputation has been magnified by his virtual disappearance from writing in the intervening 25 years. 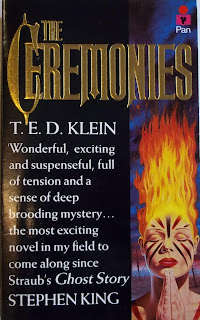 Klein's work is not difficult to find despite having been out of print for years; copies abound on Amazon and eBay as well as in good used bookstores. While opinions may vary on The Ceremonies, I have to say that Dark Gods (perhaps) proves the genre functions best in the short story or novella format; it's an important piece of horror fiction, one that respectfully earns its place upon the shelf next to its mighty elders.
Posted by Will Errickson at 7:35 PM

Ditto on "The Ceremonies"; too much padding, where the short story was excellent.

Also, there are at least 2 versions of "Petey" in anthologies. Klein changed (among other things) the route number of the proposed highway central to the story.

I own a copy of both and I could kill my fiance's coworker who got something on my copy of Dark Gods! I haven't read it yet and may have to replace it as it and my copy The Joah by James Herbert got some sort of car goop on them :(

I actually really enjoyed The Ceremonies.

I read Dark Gods (and still have it somewhere) and remember enjoying it. Back then I was into anything Lovecraftian since I had just discovered the author and was reading everything by the man and his imitators.

For some reason I put off Klein's work for years and years. Glad I read Dark Gods finally, though.

Totally agree with you regarding DARK GODS.
Though, I feel you may have slighted "Petey" a bit by not going into any detail about it.
It's actually my favorite piece in GODS & the first work I read by him, back when I first purchased the DARK FORCES hardcover WAY back in 1980.

Though "Petey" still stands up as one of my all time favorite short novels, it's been surpassed by "The Events at Poroth Farm" as my fav by the author. Speaking of which, I love that story in both it's incarnations.
As a short novel & in it's full glory as the novel THE CEREMONIES. To me, it's a classic either way.

Thanks, bluerose. You're right; I should have noted that "Petey" is a wonderful story. Loved that housewarming setting with the academics drinking and chatting about the occult as creepy stuff whirls about outside. Great ending too. For my recent birthday I received the New American Library's collection American Fantastic Tales, which I happily found includes "Events at Poroth Farm." Can't wait to finally read it.

Hey, Will, you may know this already, but if you're still looking for "Events at Poroth Farm," the semi-recent collection 'American Supernatural Tales,' edited by S.T. Joshi, is mostly excellent. Along with the Klein novella, there are stories by Lieber, Beaumont, Jackson, Bradbury, Clarke Ashton Smith, Schow, Ligotti, Etchison, along with the obvious ones like Lovecraft, King, Poe, etc. And a rather lame Howard story.

I know you prefer vintage, but considering the original pamphlet of "Poroth Farm" goes for $30 and up, its a cheap alternative, and provides a decent sampling of some of the best writers in the genre. Plus, you simply must read "Poroth Farm." One of the two or three best horror stories I've read, and much more effective than the somewhat bloated novel.

Thanks Jack! I finally did get to read "Poroth Farm" after I received the American Fantastic Tales which Peter Straub edited. So good!

Enjoyed 'The Ceremonies', but I was a tiny bit let down with everything that came after the prologue - an amazing piece of writing, could almost stand alone as a short story. Haven't read 'Events at..', has been hard to get hold of in the past.

I loved Dark Gods and actually, though I know what you mean about The Ceremonies being somewhat bloated, I still thoroughly enjoyed it (meanwhile I've some to find Stephen King nearly unbearable to read, the man has keyboard logorrhea). I enjoy Klein's writing so much I was happy to let him run on at the mouth a bit. "The Events at Poroth Farm" is one of best, creepiest short stories I've ever read. Meanwhile, both Klein books are about due for a good reissue - perhaps Valancourt Books might be the company for the job.

Definitely due for a reissue.
I'm surprised that neither of them got the signed/limited treatment - both would be ideal candidates, and would surely sell well. Mind you, I'm very happy with my 1st hardcovers.

The ceremonias is the best book (of any genre) I've read in my life. I adore Klein's subtle prose and his moody atmosphere, for me he is better writer than King in terms of style. I've just read Dark gods and all of the novellas are EXCELLENT!!! I hope the news about Nightown to be true, it could be all a gift for his readers