This List Goes to 11: Best Vintage Horror Reads of the Year 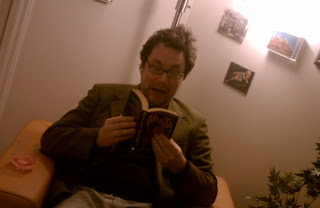 The best, and/or my favorite, horror reads of the year. List is random because I'm so lazy.

The Silence of the Lambs, Thomas Harris (1988) - A pinnacle of pop success that is also a damn great novel. Don't avoid it, as I did, because of the iconic nature of the movie adaptation.

The Exorcist, William Peter Blatty (1972) - Ditto. It's kinda like if Dostoevsky's novel Possession (aka Demons) were about, well, literally that.

The Amulet, Michael McDowell (1979) - Paperback original that transcends its origins. The grim South and a series of strange murders. Find a copy.

Son of the Endless Night, John Farris (1984) - Large-scale horror with heft that doesn't stint on the quality of writing nor on the blood and gore.

Anno Dracula, Kim Newman (1992) - A must-read for Dracula fans, a delightful mash-up of history and horror. One of the most enthralling books I've read in years.

Incubus, Ray Russell (1976) - Wish more vintage novels were this outrageously tasteless and fun to read. Gruesomely sexual and terribly sexist... or sexy. I can't decide which.

The October Country, Ray Bradbury (1955) - A must-read horror classic. Why I didn't read this 20-odd years ago I have no idea.

Echoes from the Macabre, Daphne du Maurier (1978) - Merciless stories of the random fates of men and women. The way she wields a pen is murder.

The Dark Country, Dennis Etchison (1982) - Jim Morrison once described the Doors' music as feeling "like someone not quite at home." Etchison's stories are the same... and he's not afraid to aptly quote Mr. Morrison once in a while either.

Other good stuff: Clive Barker's In the Flesh and The Inhuman Condition; the anthologies Cutting Edge and Shadows; The Tenant by Roland Topor; and Peter Straub's Ghost Story. I hope to get to review/collect some Machen, Blackwood, Crawford, and other classic writers in 2012... see you guys then.
Posted by Will Errickson at 2:39 PM

I've read 7 of the 10 and agree on all counts except for The Girl Next Door. If there was ever a book that needed burning, this is it. The ending didn't even come close to redeeming what came before. That said, I am very glad you finally came round to read The Exorcist, and you are so right on that in an era of trashy novels which became blockbuster movies, the quality of the writing soared above its competitors on the best seller lists. Daphne du Mauriers' stories are timeless and unique classics...and welcome to the world of Michael McDowell...there are a few more gems of his for you to discover. Here's to a vintage horror 2012!

Some nice reads here - Son of the Endless Night is a classic, and Anno Dracula is definitely Newman's Best. I've yet to read The Girl Next Door, but it's waiting on my shelf.

As for Roland Topor's The Tenant, I've been looking for a copy of that for years. Next to Stewart Farrar's Forcible Entry, it's probably my most sought after used bookstore treasure.

Excellent list. The Exorcist, The Silence of the Lambs, and The Shining are all wonderful reads. I need to re-read The Girl Next Door given how sick I was at the time and lack of memory I have of that one. I've yet to read Son of the Endless Night. So many people have recommended it to me but I haven't been able to find a copy anywhere. I'm going to have to seek out the rest of your list as well and given them all a read.

If any book I've read for this blog was up for burning, I'd probably nominate Laymon's THE CELLAR! If any of you guys read one of the books on my list, lemme know what you think of it.

Just read October Country because of your blog.

It's an amazing read. The stories are short but pack a wallop. I can't imagine how different the literary horror landscape would be if Bradbury hadn't written The Small Assassin or The Emissary - there would be no Pet Sematary!

And as for The Man upstairs - very few writers would ever think to pit a vampire against a sociopathic little boy.

Glad to hear it, Mac! OCTOBER really is pivotal in the horror genre.I think - or maybe it was just me - that it gets overshadowed by Ray's science/dark fantasy works like FAHRENHEIT, MARTIAN CHRONICLES, SOMETHING WICKED, ILLUS MAN, etc. I was much more familiar with that stuff, and for two decades my fave Ray had been DANDELION WINE. Till now, of course!

Great list. I'll certainly check-out The October Country and Echoes from the Macabre. Machen was a revelation and I can't recommend him enough if you are a fan of the weird tradition. E.F. Benson is worth a look, too.

Back when I was in college during the grunge era I read lots of Machen, but lost my pb copies. Loved his stuff! Can't wait to reread him but his vintage stuff goes for like $40 a pop. Haven't ever read any Benson, so thanks.

Will, thanks so much for doing this blog. It's a great pleasure to come here and be reminded of some of the great books I've read, and be turned onto some I've not. I was in my 20s during the 1980s, so I rode the paperback horror boom at that time. Wish I'd held on to ALL the good books I read then.

Glad to hear about Machen, Blackwood, etc. I have books by them and M. R. James itching to be read. Like most folks, I struggle to find the time to read everything I want to read. But those three are truly important in the field, and I WILL get to them.

Oh, and my favorite John Farris is All Heads Turn When the Hunt Goes By. (However, I've yet to read Son of the Endless night, even though I own a book club hardcover.)

Keep up the good work!

Glad to hear you're enjoying Too Much Horror Fiction, Jeff. Actually ALL HEADS made my best-of list last year!

my best horror reads this year have been the spanish editiopns of Under the dome by Stephen King, Dead in the water by Nancy Holder and the anthology Prime evil

for next year I have some stuff of modern authors like Charles L Grant, Dennis Etchison (The dark country), Thomas tessier, Graham Masterton, Al Sarrantonio, David Morrell... and recent anthologies by Stephen Jones and Ellen Datlow and more modern authors like Jack ketchum, Brian Keene, Bryan Smith, Scott Nicholson, Jonathan Mayberry or Bentley Little, I don't know Will maybe you're a bit radical not reading the horror written these days, ok extreme horror could be a crap but you would like authors like the lovecraftian Laird Barron or the anthologies I mention above...

Son of the endless night was translated to spanish but since I didn't like All heads... in fact I only read the prologue I don't care about other books by Farris, All heads... starts in a spectacular and exagerated way but when I noticed the main character was a private investigator in the 40s, ejem not my cup of tea

The october country, in the first 90s I like very much The illustrated man and was looking for more anthologies by Bradbury but I got The machineries of joy that were full of non-genre stories and gave up Bradbury for a time, later I read Golden apples from the sun slightly better but very far from the excellence I remember of The illustrated man, it looks like The october country is a great horror collection, if things go in a good way could be my halloween read... Martian chronicles is of course above the rest is one of my favourite s/f books

well I wish you a year full of vintage horror jejeje...

pd I don't think if I wish the blog for reviews of classic horror since I'm tired of spanish forums only speaking of that kind of horror... apart from King and some zombie crap it looks like people in Spain don't read modern horror

The Exorcist is on my list to read for next year.

Like SILENCE OF THE LAMBS and THE SHINING, an essential read even if you're already familiar with the movie adaptation.

I don't remember a private investigator being one of the main characters in "All Heads Turn When the Hunt Goes By." That sounds more like William Hjortsberg's "Falling Angel" (although that's mostly set in 1959 or so).