Anno Dracula by Kim Newman (1992): A Nightmare of Delight 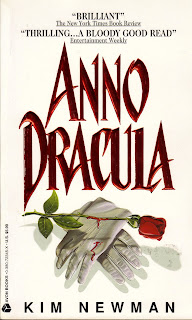 Look, I'm just gonna jump in head-first and not fuck around: Anno Dracula, the fourth non-pseudonymous novel from British film writer Kim Newman, is one of the most accomplished and thoroughly enjoyable novels I've read, not just for Too Much Horror Fiction, but, like, ever. Would that I read it upon its original publication, when I was working in a big chain bookstore and reading at a pace like never before or since (blame the internets). For some reason, when reading its jacket, I just thought, Oh, sounds kinda cool, but wasn't overly convinced of its readability and anything about the British monarchy generally bores me beyond tears. Shame, because I'd loved loved loved Newman's book on the modern horror film, Nightmare Movies (1988). But last month I found a perfect edition of the original Avon paperback and bought it on a whim. Just think: if I'd read Anno Dracula back then, I'd have had well over 15 years to recommend it to people. Damn, what a missed opportunity. Out of print for ages, it's finally back in 2011! 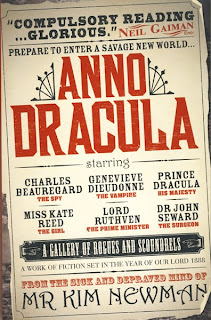 With a breathtaking effortlessness, Newman brilliantly weaves together the twin nightmare mythologies of real-life monsters Vlad Tepes and Jack the Ripper into an alternate history whole unlike any horror novel I have ever read. All manner of historical figures waltz through the book, particularly fictional vampires (and other people too) from film and literature. Part of the fun of reading Anno Dracula is recognizing these characters, often wittily referenced and employed. Famous Victorian characters from Conan Doyle, Dickens, Wells, Stevenson, Le Fanu, and others appear (much as in Alan Moore's later The League of Extraordinary Gentlemen graphic novels). Lord Ruthven is made Prime Minister; Count Iorga, a much-mocked general; Drs. Moreau and Jekyll are consulted in the Ripper case; Kate Reed, a character cut from the original 1897 Dracula, is a young reporter; Oscar Wilde stops by; why, even Florence Stoker, Bram's wife, is part of the action. Too bad Bram was exiled after his friends failed to stop the king of the undead. 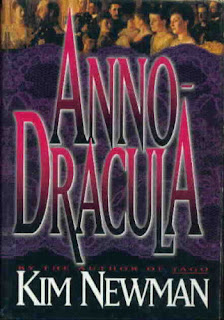 Newman's Vlad Tepes is also Stoker's literary creation Count Dracula, and it is this towering king vampire who wins out over Van Helsing, Jonathan Harker and the other men who'd banded together to stop him. This happens before the novel begins, but Dr. Jack Seward (he ran the madhouse and studied Renfield, remember) recounts the tragedy in his diaries early on: We were defeated utterly. The whole country lay before Count Dracula, ripe for the bleeding. Dracula, ever the military strategist, makes his way to Buckingham Palace and marries Queen Victoria, and then turns her into one of his unholy concubines. Van Helsing is recast as a traitor to the British Empire, his head placed upon a pike. Dracula, who had been King of the Vampires long before he was ruler of Great Britain... the undead had been an invisible kingdom for thousands of years; the Prince Consort had, at a stroke, wiped clean that slate, lording over warm and vampire alike. 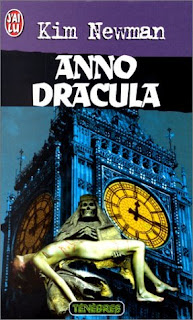 And now it is the year and age of our Lord and our Savior, the mighty Prince Vlad Dracula, and every knee shall bend, every tongue shall... well, not confess, exactly, but you know what I mean. From here he turns the country into a new police state; the reign of Dracula is powered by the Carpathian Guard, brutal old-world vampires (you'll recognize some of their names; does Graf Orlok ring a bell?) he has brought to England for the purpose of spreading vampirism and stamping out any political insurrections. Criminals and traitors and others - living or undead - who try to defy the edicts of the "Prince Consort" are, of course, summarily impaled. Newman relishes those details, you can be sure. Unpleasant indeed, particularly for those who get not the pointed spike, but the, uh, rounded blunt spike. Hey-oh! 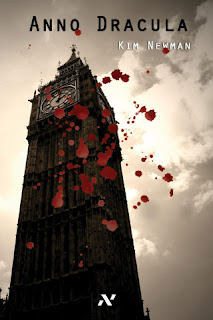 As the novel begins, vampire prostitutes are being murdered on the foggy midnight streets of Whitechapel by a killer at first dubbed the "Silver Knife," alluding to his weapon of choice, since only pure silver can truly kill these nosferatu newborns. In this bloodthirsty new world, many living want to become immortal undead - it's seen as a step up in society - while vampires can live quite well on small amounts of blood that humans - or "cattle" - willingly give up. Vampire whores offer sex in exchange for a, ahem, midnight snack. As one might expect, though, Christian anti-vampire groups have formed, and England faces turmoil and riot in these days of class struggles and uncertain future. 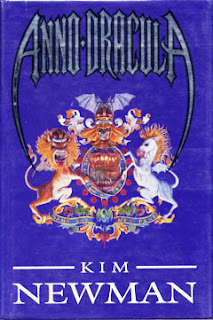 Anno Dracula also enlists elements of espionage and detective fiction. The Diogenes Club, a mysterious gentlemen's group referred to by Doyle in his stories, sends for the adventurer Charles Beauregard and requests his services in bringing the Silver Knife to justice. The head of this club? While not mentioned by name, he is the criminal mastermind Fu Manchu. One of Newman's long-running creations, Geneviève Dieudonné, is a vampire, older than Dracula himself, who is driven and brilliant but an outcast whose long life puts her at odds with the warm, or living, and vampire newborns around her. She and Beauregard, aided by real-life Inspector Abberline, join together after the infamous murderer, soon to be dubbed Jack the Ripper. Although widowed Beauregard is now engaged to a prim and proper social climber, he will find he and his beautiful vampire partner are alike in many ways. 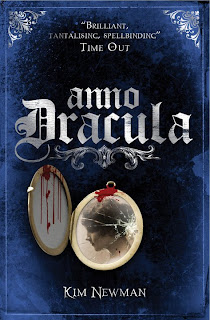 Sometimes, Lucy's advances to Kelly are tender, seductive, mysterious, heated caresses before the Dark Kiss. At others, they are a brutal rape, with needle-teeth shredding flesh and muscle. We illustrate with our bodies Kelly's stories. 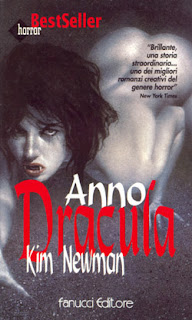 Other wonderful scenes abound: Beauregard's misadventures in the city, Jack's heartless murders, explosive riots in the streets, the hopping Chinese vampire who stalks Geneviève, trickery and ruthlessness, general bloodletting and blood-drinking of various sorts. It is definitely part gruesome horror story; Newman regales us with this almost eternal England night.

For virtually all of the novel, Count Dracula is referred to but never seen, but when he finally is revealed, in all his revolting glory, ensconced in a filthy throne room in the Palace, Newman outdoes everything that's come before. Beauregard and Geneviève have been summoned to appear before him and his Queen, and they are aghast at how they find him in his rank and hellish quarters (highlight if you want to read the spoiler): bestial and bloated, enormous and naked but for a bedraggled black cape, his beard matted with the gravy of his last feeding, yellow fangs the size of thumbs, shadows of all his other shape-shifted selves in his crimson corpulent face, the great Count Dracula is obscenity personified. Chained to him at his feet is the newborn Queen, while nearby his famous Brides writhe in feral lust and red thirst. This is no regal steel-haired gentleman clad in elegant black bidding his guests welcome and to leave some of their happiness; this is a bursting tick gorging on humanity itself. The novel's ultimate confrontation is at hand. 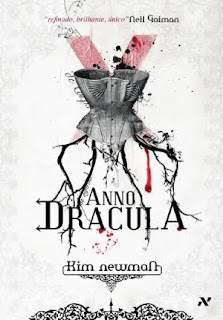 Audacious and unique, written in an unobtrusive manner that doesn't scream "Hey, get this name, get that reference, wink-wink," Anno Dracula is an unparalleled work of popular fiction, filled with inventive touches, expertly twining several sub-genres into an utterly satisfying and engaging whole. Historical fact and historical fiction bound together with nary a seam to be found. My review only touches on a few of many pleasures to be found between the covers; Mr. Newman has written an essential, unmissable horror read that is a nightmare of delight for fans and horror newcomers alike. 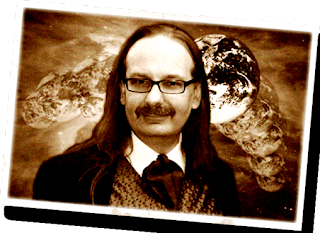 Posted by Will Errickson at 5:20 PM

What a stellar recommendation and review. I'm going to put this on my TBR list on Amazon right now. Thanks!

Much better late than never to one of the great vampire novels and a super historical fiction! You'll also enjoy the sequel, The Bloody Red Baron.

I agree, 'Anno Dracula' is a great book.

I found the second volume in the trilogy, 'The Bloody Red Baron', to be even better, and the (carefully unacknowledged) inspiration for the recent Mignola / Golden book and comics featuring 'Lord Baltimore', works also set in an alternate, vampire-infested, WWI -ravaged Europe.

The third volume in the trilogy, 'Judgement of Tears' (somewhat inexplicably re-issued under the title 'Dracula Cha Cha Cha') ably maintains the offbeat energy of the first two installments.

You can bet, guys, that I am *so* looking forward to reading more in the series. Definitely my kind of thing.

Just finished reading this book last night. Loved it. Although i did need to trace back through the book a couple times to find some details i missed.

Last chapter is a great payoff. Can't wait to read the next one, but wonder if i should wait for the reissue.

Yes, there are lots of characters and plot details that had me flipping back through the book - sometimes I read while, uh, under the influence - but that's not really ever been a deal-breaker for me.

Wow this book sounds phenomenal, thanks for the tip. My favorite genre is probably “apocalyptic horror”, in which the world is radically transformed or destroyed in a horrific way. If anyone has any other recommendations that fit that description please let me know!

Mr. Newman has some nice short stories in the Anno Dracula universe out there, as well. May I recommend "Francis Ford Coppola's Dracula"? The story, that is; not the movie...

Thanks for the review I will be adding this to my summer reading list.

This is one of my all-time favorite novels.