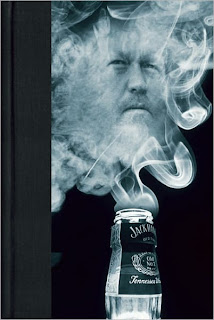 Today Too Much Horror Fiction celebrates another birthday, this one of a favorite writer and editor in the horror field, the late lamented Karl Edward Wagner. Happily I just found out that Centipede Press will be collecting all of Wagner's horror tales into two volumes: limited editions with illustrations by JK Potter and signed by the likes of Peter Straub and Stephen Jones. If you don't wanna shell out the big bucks for those special editions, fear not, for you can also buy them in more affordable hardcover editions: volume one, Where the Summer Ends, and volume two, Walk on the Wild Side, both set for a March 2013 publication. I absolutely love that cover at the top, Karl's smoky visage rising from an opened bottle of Jack Daniel's whiskey (his early death a result of his love of imbibing, alas). All of his tales of horror will be included. Huzzah! 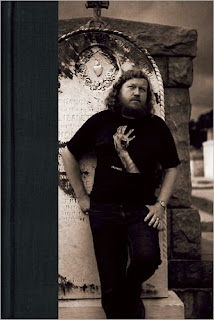 I've featured Wagner a few times on Too Much Horror Fiction: his paperback collections Why Not You and I? and In a Lonely Place as well as his Year's Best Horror anthologies. Usually I don't note new publications, particularly from a publisher like Centipede Press, who, although they deserve accolades for keeping obscure works "in print" and for carefully selecting texts, illustrations, and even old paperback cover art, their price points leave a lot to be desired. I've really no interest in paying hundreds of dollars for books... at all. For those who can afford their pricey editions of Hell House, The Fog, Some of Your Blood, 'Salem's Lot, The Other, or The Search for Joseph Tully, great, but I'm happy scouring used bookstores and library sales and the internets looking for that lost forgotten classic, and then paying about $2 for it...
Posted by Will Errickson at 9:15 AM

Pioneer of the purist movement in Howardom, connoiseur of the pulp classics, an excellent anthologist and author of sword and sorcery and horror tales, I have read some of his best known stories Where the summer ends, Sticks, The river of night dreaming... but no Kane saga, have you read it? I have read that is a kind of Conan but more introspective. His look was symphatetic and intimidatory at the same time, the thing is that one of the biggest personalities in fantasy and horror literature is almost unknown in Spain and I'm afraid even in the United States

Hardcover expensive books, I'm just like you prefer two or three paperbacks better than a hardcover and I don't think about buying books for more than 25 € sometimes I feel people who prefer hardcover are more interested in decoration than in reading

I buy used books in internet and althought you can buy for example my most recent adquisition, the spanish translation of The midnight sound by Charles L Grant for 3 or 4 € with the postal costs I must pay more than 11 €