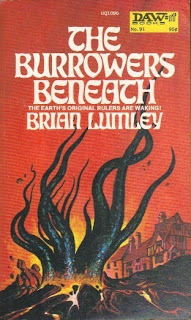 On this day in the year 1937 the stars were right and born of man and woman was Brian Lumley, a British human whose tales of Lovecraftian and vampiric mayhem and mystery have been part of our beloved horror fiction for decades now. In addition to his ever-popular epic Necroscope series (many moons ago I got about 100 pages into the first volume and was overwhelmed by what I recall as ESP sensitives and Cold War espionage - topics which make me deliriously bored), Lumley added deeply and uniquely to the Cthulhu Mythos. Unlike the usual whey-faced antiquarian professor or amateur genaeologist that populate the Providence Gentleman's tales, Lumley's characters - particularly one Titus Crow - face the octopoid and batrachian obscenities with courage and high good humor, neither of which Lovecraft supplied in any real capacity. 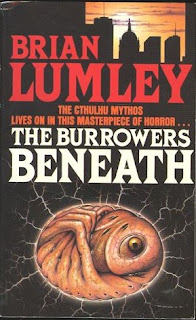 Honestly I've not read any of these vintage-looking science-fiction horror paperbacks; I have however seen recent trade paperback editions that collect these and other Titus Crow stories. Guess which I prefer? 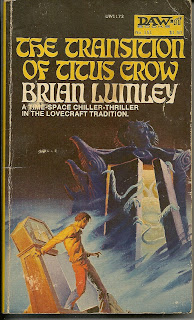 The Burrowers Beneath (at top, Daw 1974, art Tim Kirk) is a perfectly conceived landscape of Lovecraftiana; next, The Transition of Titus Crow (Daw 1975, art Michael Whelan). Also see a UK paperback of Burrowers, from Grafton with art by Alan Hood. 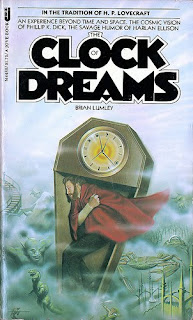 Third: A Clock of Dreams (Jove 1978), which looks more like a contemporary fantasy, particularly with note of the legendary Philip K. Dick and the mighty Harlan Ellison, definitely two writers of genre the who'd carved their own niches in that speculative field. Dude's beard gives a real hearty '70s sensitive masculinity vibe too. I'm safely guessing this novel takes place in Lovecraft's Dreamland of Kadath, Celephaïs, Sarnath and who can forget the Plateau of Leng? Good times for all, I'm sure. 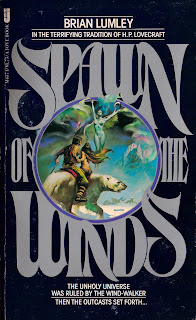 Spawn of the Winds (Jove 1978), is apparently more of a Robert E. Howard-style men's adventure, even in prose style, despite the in the terrifying tradition of H.P. Lovecraft tag. With its cover art by Vallelejo - a polar bear? dude - how could it not be? Lumley apparently deepened the Mythos in a way few other writers did, even though it sounds like he deepened it in a direction I have no interest in, both by adding derring-do fisticuffs and fantastical alien fairie princesses and more insight into otherdimensional deities. I like my Mythos dank and sepulchral and maddening, thank you! The title font makes it look like a historical romance. 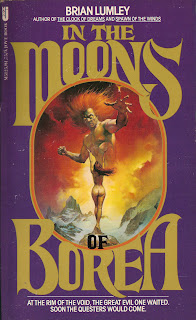 Same goes for In the Moons of Borea (Jove 1979): this is not the kind of Lovecraft-inspired fiction that I crave, seems like Edgar Rice Burroughs got in there somehow. And we all know old HPL would want nobody bare-assin' it on the cover of one of his books! Fine for some readers, not so much me. Ah well. I like those early DAW covers, as this UK paperback of the final volume in the Titus Crow series, Elysia: The Coming of Cthulhu (1989/Grafton 1993 with George Underwood art) recalls. 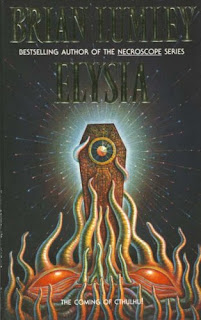 Cthlulhoid tentacles crawling, all evil, upon a coffin which contains... what? Humanity? Our world? The universe? Don't even bother telling me if I'm wrong. And finally, a '90s Tor paperback for Lumley's many short stories through the decades, the awesomely-titled Fruiting Bodies and other Fungi. That's a missed opportunity title for an aged Arkham House edition if I ever heard one! 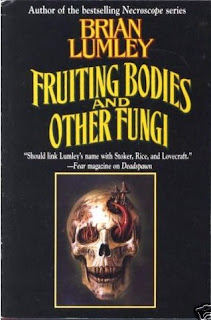 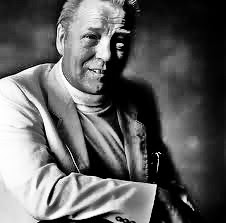 Posted by Will Errickson at 1:36 PM

I believe the more sword-and-sorcery looking titles are set in the Dreamlands, which is a bit more forgiving of such doings than, say, Arkham.

Jamie, I believe you're right - I've read a handful of HPL's Dreamland stories and liked them okay, but for me, well, I can't get enough of shadowed Innsmouth, horrific Dunwich, haunted Arkham...

Lovecraft was a friend of Robert E Howard, and the Mythos crosses over with the Conan stories

That's 100% true Robot Devil, but I haven't read any of Howard's Conan stories, only his handful of horror stories, like "Pigeons from Hell."

Hi Will, I found your blog after reading the ridiculously excellent Paperbacks From Hell. I've been going through all of your posts since the beginning and I really love this blog! You are doing good work. I have so many books I need to read now.

I also love the nostalgia factor as well which is definitely the case, for me, with Brian Lumley. I have read at least 10 of the books in the Necroscope series as well as all of these Titus Novels and stories. I have many of the original paperbacks you picture above as well. You are right in assuming that Lumley adds essentially pulp heroes with hardened resolve to the Mythos. It essentially takes the Mythos and changes the intention and meaning from cosmic horror to pulp ala Doc Savage.

I absolutely loved these when I discovered these as a teen. They are full of great imagination and are ridiculously earnest. I have never read another author who uses the exclamation point nearly as much as Lumley. Sometimes more than one is a single sentence.

Unfortunately I seem to have outgrown him now. Every time I try to pick one up these days they don't do much for me. I definitely prefer the Lovecraft/Ligotti cosmic horror much better. However, I should point out that Fruiting Bodies and Other Fungi was the best of his short collections. Some really good tension and dread, especially the real world horror of The Viaduct, at least from what I can recall. Might be worth a quick look.

Thanks for reading jdretan! Glad you're digging the blog. I still need to read FRUITING BODIES, good to know...