Nightmare in Red (1981): The Strange Case of Jacqueline Marten 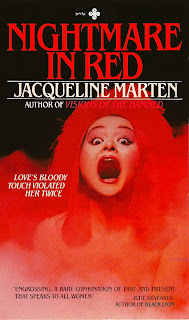 Here's a true tale of woe and horror in the publishing world: Playboy Press published dozens of paperbacks throughout the '60s, '70s, and '80s, till its line was bought by Putnam and became part of their Berkley list. Boring behind-the-scenes stuff, yes, but one thing Playboy had done at its height was publish many titles that were basically historical romances with some darker, perhaps supernatural aspects to them, and present them as horror/occult paperbacks. Shameless! Outrageous! Unacceptable! 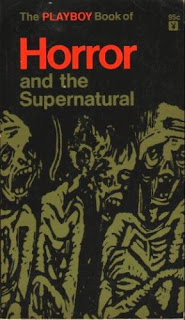 Well, I just found out about Nightmare in Red, and pity poor Jacqueline Marten: originally her title for this romance novel was Let the Men Stay Home, then it was Bryarly... but Playboy of course wanted to cash in on the occult craze of the day, so they gave the paperback a garish horror-themed cover and retitled it Nightmare in Red. Who could resist such an aggressive cover image?! (Very Alucarda if you ask me). It was such a crude marketing ploy that Marten literally cried when she saw the paperback for the first time. Fortunately for her, Pocket Books reprinted it in 1988 under the title Bryarly with a more accurate romance-y cover. 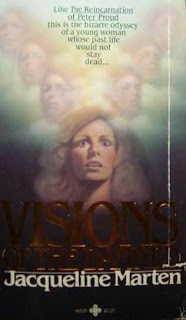 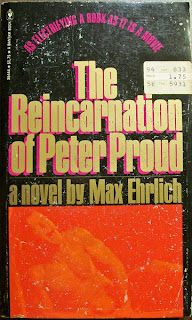 And that wasn't the first time! In 1979 Playboy had published her novel Visions of the Damned and presented it in the same manner, although this one isn't quite as tacky - but it does name-check the bestselling Reincarnation of Peter Proud. It too was reprinted by in '88 Pocket as Forevermore. Both Nightmare and Visions are considered precursors of that whole "paranormal romance" sub-sub-subgenre. Fortunately these two novels got good reviews in the romance genre, even with their utterly inappropriate cover art, which ensured their republication by more reputable publishers. Oh, Playboy: so very very naughty! And not in the hot way.
Posted by Will Errickson at 2:19 PM

That horror and supernatural collection has some good stories in it.

Wow, I didn't realize Playboy published a "horror" line that far back. I had just assumed it was a way of cashing in on the 80s boom.

I read their Horror and the Supernatural paperback collection a couple years back and it was really excellent, with all those great 50's and 60's writers like Ray Russell, Charles Beaumont, Bradbury, Bloch, etc.

I remember seeing the TV (?) movie of Reincarnation of Peter Proud when I was a kid. I didn't really understand it of course but it still creeped me out. For some reason, society was really fascinated with reincarnation in the early 70's.

Hello, seeing your post for the first time. Jacqueline, better know as Mom in our household, reacted with tears. "Let the Men Stay Home" was published, a single leather bound edition for the author's birthday. Visions of the Damned was originally titled, "Legend of the Weeping Ladies", and was based on an actual family curse.

All the Best,
Ethan Marten