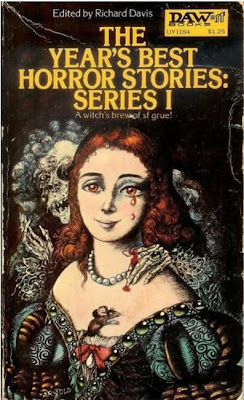 The Year's Best Horror Stories series ran for over two decades, from 1971 till 1994, collecting what one hoped actually were the year's best horror stories. Before Karl Edward Wagner picked up the mantle as editor in 1980 with volume eight, the series had two other editors: Richard Davis and then Gerald W. Page. But it's just the cover art I'm interested in for this post, not the stories within. Artist Hans Arnold's cover for the 1975 reprint (at least I think it's the reprint; I've found conflicting info on publication years) of the first in the series, seen above, evokes a nice balance of horror, dark fantasy, romance, and fairy tale. In other words (I think), "A witch's brew of sf grue"! First few times I looked at this cover I didn't even notice the rotting crone behind the crimson-eyed Victorian girl weeping blood... 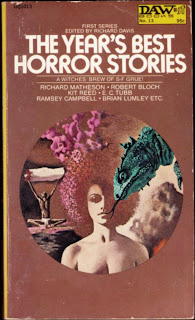 Karel Thole's surreal yet rather tame cover for the original 1972 paperback doesn't have nearly the same impact - but the names Matheson and Bloch and, uh, Tubb beckon. I wonder how many science fiction fans, the people who would normally buy books from the DAW line, were interested? 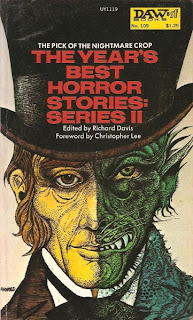 Arnold returns for Series II (1974) and wham-bam, gives us an impressive double image of Mssrs. Jekyll and Hyde. Pretty cool. And an intro from Sir Chris? That's class. But the word "series" I find confusing; "volume" would be more accurate, no? 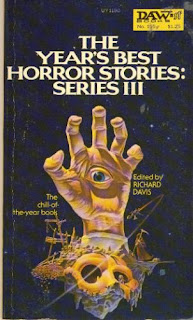 With the third book in the series, the famous Michael Whelan brought his talents to the party; Series III (1975) seems more science fictiony to me than horror fictiony, and rather prefigures the cover of King's Night Shift. But this is apparently the "chill-of-the-year book" so who am I to say? 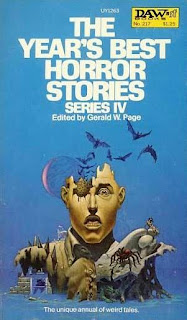 Author Gerald W. Page's tenure as editor began with Series IV (1976), and Whelan contributed another cover, still with SF elements - I mean, behind that guy's head, that's no moon. There are some bats, though, I'll give it that. 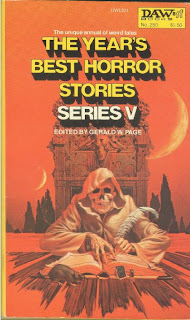 Okay, Whelan's cover for Series V (1977) is fucking metal as fuck. I mean, FUCK YEAH. You just know Steve Harris was grooving on this artwork after a few puffs while plonking away on his bass. 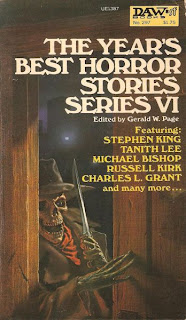 Yee-haaawwwgggghhh... cowboy corpse comin' for ya! Series VI is from '78, and King gets the cover, of course (anybody else remember the short-lived horror/western mashup called "cowpunk"?). 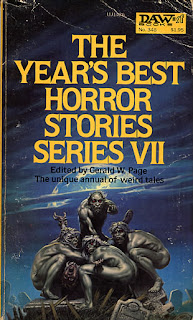 And finally a truly horrific cover for Series VII (1979), Whelan once more, this time not shying away from gut-wrenching (literally!) horror whatsoever. Thank the infernal gods below! Oh, before I go, anybody got a spare $300 lying about? You say you do? Then check this out.
Posted by Will Errickson at 6:00 AM

I am quite familiar with the covers for V and VI, but only because they graced role-playing game books in the 80s. I had no idea they had earlier pedigrees.

And the cover to Steve Jackson Games' GURPS Horror 1st edition from 1990:

Brings back memories. I used to live for the annual publication.

That's what 300 bucks gets you? Well, I have TED Klein's novel and novella set in my nightstand. Nah, I like 'em too much.

I have the complete collection, purchased individually. Most of them were pretty cheap except for the last few, but the postage from various vendors really ran it up. If course I had owned some since the late 1970s, probably paid 0.50 for them.

That isn't an old crone in the background of #1, it's her lover, from back when men used to wear wigs. Even more horrible, no?