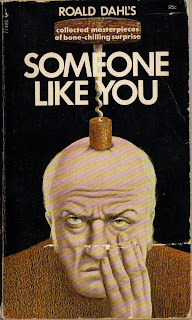 World-famous for his singular children's fiction, Welsh author (and WWII fighter pilot) Roald Dahl was born today in 1916. But fans of the dark and the disturbing also celebrate his short stories: blackly comic, unsparingly ironic, finding fatal foibles in the class and taste distinctions of post-war British life. Dahl's language is plain but precise, scalpel-sharp, cool and confident, in stories that are sometimes suspenseful, sometimes playful, but all generally quietly creepy. 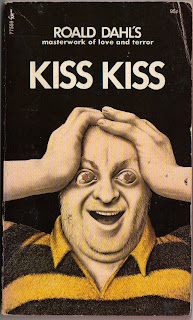 They were often published in The New Yorker, Collier's, Harper's and other top periodicals of the day. Unsurprisingly, Alfred Hitchcock adapted half a dozen of Dahl's tales for his own television show in the late '50s and '60s, all six can be found between these two collections, Someone Like You and Kiss, Kiss: "The Landlady," "Dip in the Pool," "Man from the South," "Lamb to the Slaughter," "Mrs. Bixby and the Colonel's Coat," and "Poison." Also recommended: "Royal Jelly," "Taste," "The Great Automatic Grammatisator." 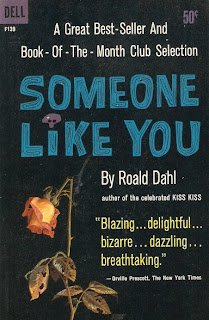 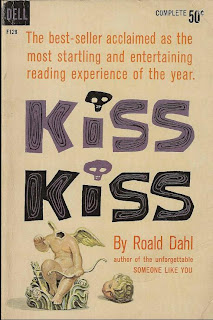 Original Dell publications
Somewhat more recently, Stephen King included these two in his recommended reading list in the appendix of Danse Macabre, noting their importance to the horror genre specifically. Which is - surprise, surprise - why years ago I sought out and read these nicely vintage paperbacks from Pocket Books, reprinted in 1972 (old book smell included!). Perhaps some of Dahl's twist endings can be seen coming today as we've had decades of that kind of thing in our entertainment, but many of the stories here are still deadly delights, disarmingly nasty stories of human depravity. Those of you who enjoy the short fiction of writers like Shirley Jackson, Fredric Brown, Harlan Ellison, Charles Beaumont, Gerald Kersh, and/or Richard Matheson will find much to enjoy in Roald Dahl's work... if you haven't already, of course! 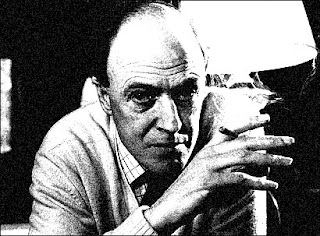 Here's something I just learned: back in 1961, Dahl hosted his own CBS TV show, "'Way Out"! His macabre humor and utter Britishness was very much in the Hitchcock vein (heh) and the show was paired with "Twilight Zone" on Friday nights. It only lasted one season, though. Oh man, I had never heard of this till just today. Full episodes are on YouTube; at least check out Dahl's droll intros.

Posted by Will Errickson at 9:54 AM

He also hosted the anthology show "Tales of The Unexpected". Great show, marvelously creepy opening, and occasionally awesome episodes (some based on his fiction).

Nice post. I've always liked Dahl's "adult" stories better than his kid stuff (though Danny Champion of the World is good, and who can resist The BFG and his snozzcumbers?). The Uncle Oswald stories are also good.
Another writer who sometimes wrote similar stuff who you did not mention is Patricia Highsmith -- "Lamb to the Slaughter" and "Something the Cat Dragged In" come to mind.

What is the name of the Dahl story where the man works in the abattoir and ends up getting his throat slit? I know it's not 'Lamb to the Slaughter'. . .