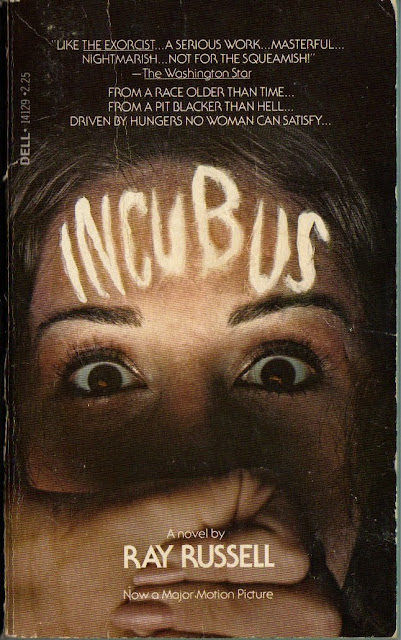 The town of Galen seems to have more than its fair share of attractive females. Maybe that's how the trouble started.

What's all this then? Small California town invaded by outside evil. Teenage girls on the ripe cusp of womanhood ravaged and murdered. Young men plagued by dreams - memories? - of ancient evils. Steely-eyed men searching for a truth no one else will face. Superstitious old ladies, helpful doctors who drink too much, incredulous town sheriff... and did I mention young women ravaged? Right. Incubus has all the right ingredients for a '70s pulp-horror novel and dishes them out well poker-faced. I started it late one evening and yes, couldn't put it down. Even better, I was barely expecting such entertainment! Comparable to other '70s Too Much Horror Fiction favorites like The Manitou or The Rats, Incubus is definitely a forgotten high point of the vintage horror fiction era.

Author and editor Ray Russell (read a good little bio in his obit here) has got horror cred: why, he discovered Charles Beaumont when working as an associate editor for Playboy. He wrote lots of horror and fantasy and screenplays for William Castle and Roger Corman. His most famous tale, "Sardonicus," is a highly regarded modern Gothic story which Stephen King recommended in Danse Macabre. His stint at Playboy in the late '50s into the '70s becomes quite obvious as you read Incubus. Quite wonderfully obvious indeed. 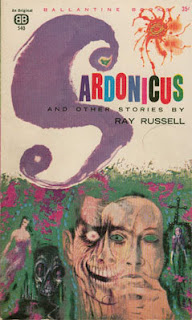 Back to Incubus: In the seaside California town of Galen, young women - not really innocent - are suddenly being raped and killed. Their bodies are left ripped and torn, leading some to think the perpetrator is not wholly human. But what is driving the deranged individual is not power, but procreation. Yep. Enter Julian Trask, well-known esoteric anthropologist who once taught in the town and returns because he has a terrifying theory about the killer... 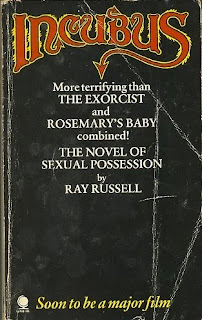 The inevitable comparisons made...

Russell's book is pure delightful pulp told with tongue nowhere near cheek. You know King would never note his hero's square jaw or steely eyes, the heroine's small but perfect breasts or her high cheekbones, much less her "fleecy down" and his "ebony thicket." Russell loves these kinds of details and I daresay you will too. There are Middle Ages torture interstices that rival anything the later splatterpunks would produce, perverse sexual goings-on that would shame Bataille, de Sade, or Krafft-Ebing. It's oddly in lurid good bad taste, if that makes any sense, and even a thoughtful moment or two turns up as Julian and old Doc Jenkins debate supernaturalism, agnosticism, skepticism, and whatnot. (And I really liked Doc Jenkins; every time after a crisis he suggested everyone join him at his home or his office to discuss the disturbing events over Scotch whiskey). 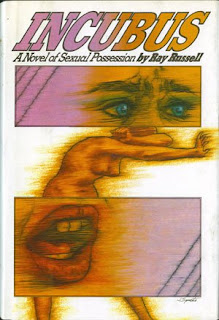 Considering the debased quality of the story and the many scenes of questionable taste, the Dell cover art for this 1981 paperback (at top) could have been much, much worse, and by that I mean much, much better... although I understand now what's giving that Clairol model the frights. Yikes. 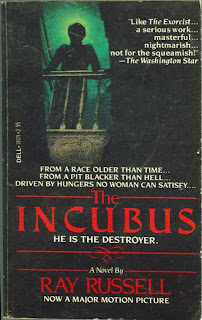 Sometimes I couldn't tell if Russell was satirizing traditional sex roles or, like Playboy thought it was doing in its heyday, embracing them with open fervor and celebrating a healthy lust for, uh, life in both men and women. Was he being sexy or sexist? You decide. Maybe it was just me, but I felt these concerns swirling beneath the sleazy surface. You can take 'em or leave 'em though. Containing all the sensitivity and gender enlightenment of a Spinal Tap album, Incubus is prime '70s horror that never heard of Stephen King. 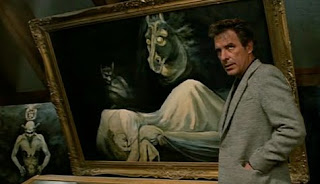 Here's the awesome John Cassavetes from the 1981 movie adaptation: "I swear to God, there's gonna be a rape tonight."

Posted by Will Errickson at 5:29 PM

Great book. A big fave of mine. I like your "70's horror that never heard of Stephen King." I think Dick Laymon would have enjoyed this book. The cover above with the figure on the stairs is very, very "Halloween". BTW, the "Incubus" movie was disappointing.

Yup, the movie bit. I mean, I wanted to see the prosthetic wonder that... Uh... you know, that drooling grapefruit thingie.
Funny story. I was in the twelfth grade. Friday night, and I had the house, and a female classmate all to myself. Just as I was about to get some, my three friends arrive unannounced. They've brought scotch and a VHS tape of incubus. They pop in the vid, pour the scotch into my largest milk glasses, and get down to the serious business of alcohol and horror, fat chick be damned. Later on they made her drive them home, but only after she watched them drink scotch by the pint. And yes, the movie bit. No, the relationship didn't work out.

Great review. But now Mac's story has me tearing up a little.

Ah yes! I remember this book well! Dogeared and much abused in the small library of smut kept in the Engineers Mess on-board HMAS Vampire..Cheers!

ARRRGH!
I had that original paperback version of the novel fresh of the supermarket shelves back in 1978 & someone borrowed it & I never got it back.
That's why I'm such a freak about my books now & refuse to allow anyone from outside my home to borrow them. Meaning, basically, that my wife can read 'em & that's the extent of my sharing.

I DID get to read the book before it's disappearance though & I LOVED it.
Yeah, being a 17 year old male with raging hormones had something to do with it, but not everything. It was just a beautiful example of a cool, scary, lurid paperback original.
Not to mention that Russell was a fairly underrated genre author.

BTW, one of the prizes of my horror movie tie-in collection is that 1961 copy of SARDONICUS. Great book.

Jim, technically INCUBUS wasn't a paperback original; you can see the hardcover edition above, from Morrow. What was on that paperback edition you had? I couldn't find it anywhere.

It should be mentioned that Ray Russell was not simply another pulp horror writer. I consider SARDONICUS a modern horror masterpiece, but he did a lot of respectable non-horror work at Playboy. (I can't help but wonder if SARDONICUS isn't loosely based on the silent film, The Man Who Laughes?) I recently got a copy of "Playboy's Ribald Classics" which is edited by R.R. and has a great intro wherein he vigorously attempts to establish the difference between "ribald" and "pornography". I recommend that all fans of R.R. pick this book up. -Leftcoastghost-