The Foundling by Frank Lauria (1984): She's My Little Rock'n'Roll 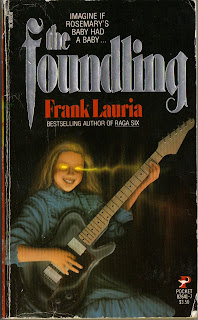 I know Frank Lauria is a trashy cult writer but I don't know anything about him. Looks like he was writing novelizations by the late '90s and early '00s, but back in the '70s and '80s his books were adorned with some pretty tasty horror/occult fiction cover art. When I found The Foundling in New Jersey, I bought it solely for its cover alone. It epitomizes the absurd lengths to which publishers would go to snag a passerby at a bookstore or drugstore rack. Her eyes have the power! The tagline is cute, I'll give it that. And though the young girl depicted on the cover (wearing what appears to be a Mormon dress) looks nothing like this in the book itself - she looks less like a child, has more of a charismatic dark beauty - rock'n'roll does figure in the story. At least it does in the first 75 pages; that was as far as I could get into this mild, so-so horror novel. Maybe it got better later, but I got no time to mess around.

And more: will you all bear witness to the magnificence that is the original 1970s paperback covers for Lauria's "psychic detective" Dr. Orient? My favorite is Baron Orgaz, followed by Lady Sativa... Pick your favorite! Be sure to visit The Groovy Age of Horror to read reviews of the each book in the series; I myself have never run into any of them in my bookstore haunts, nor had I heard of them till Groovy Age reviewed them. So behold such glorious and evocative covers. 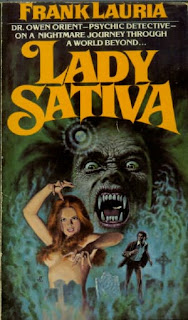 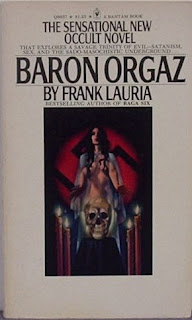 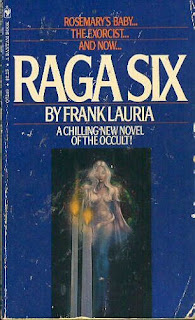 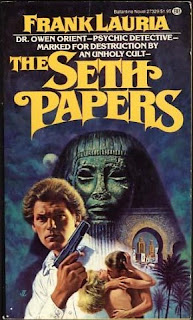 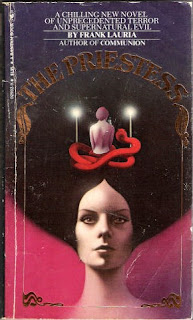 Frank Lauria, eh?
I'll check my used book places for something by him.

The Foundling DOES look awesome.

And you'll find some more of his work there.
Communion was a fave of mine too!.
Cheers!

Whoops!..I'm an idiot!..Nonetheless,these books can be scrounged especially at ye olde style of horror bookshops..No reprints that I know off but that may change.

I think that the adventures of Dr. Owen Orient must be sexy indeed... based on the cover.

Regardless of your poor review, I don't think I can resist buying this one. Such a great cover.