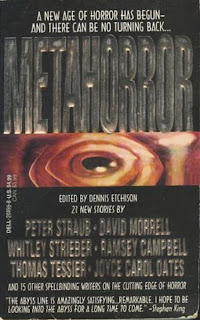 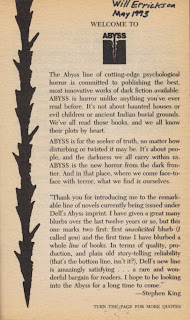 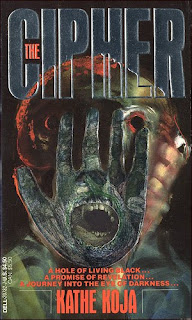 Launched in February 1991 with Kathe Koja's stunningly bleak and unsettling The Cipher, Abyss published one title a month, ending up with more than 40 titles overall. Most of the authors were first-time novelists, or at least writers with only a few books under their belts, but in the case of MetaHorror (July 1992), an anthology edited by ever-present '80s author Dennis Etchison, the line also featured well-known horror masters. Women writers were plentiful - the most successful was easily Poppy Z. Brite, but also Tanith Lee, Nancy Holder, Kristine Kathryn Rusch, Melanie Tem - and guys like Brian Hodge and Rick R. Reed really got started here. What they all had in common was a desire to do something new with horror fiction. But, for various industry reasons, Abyss folded later in the '90s and my love of current horror pretty much went with it. 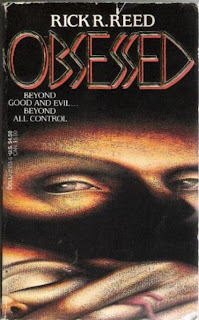 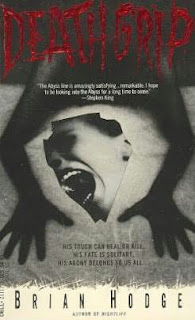 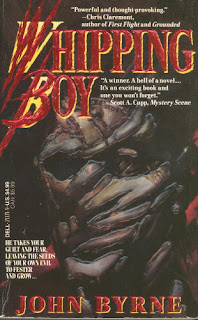 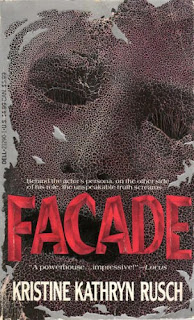 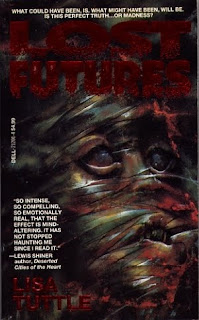 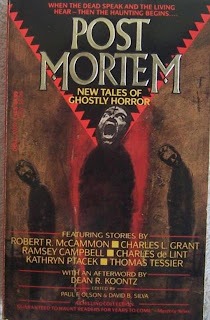 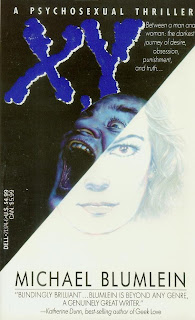 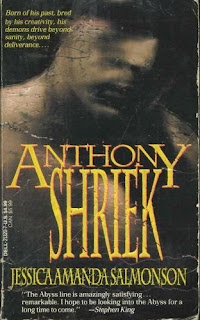 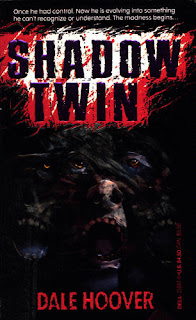 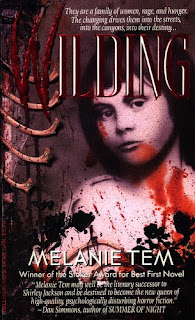 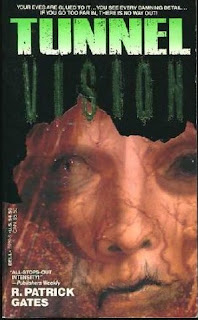 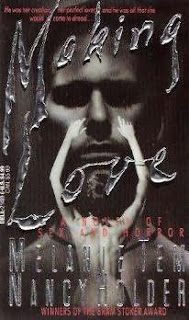 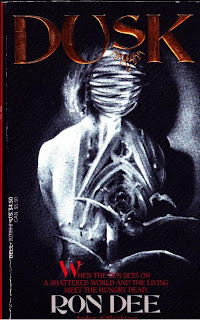 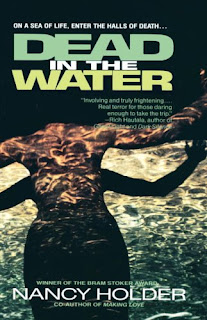 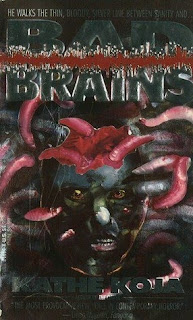 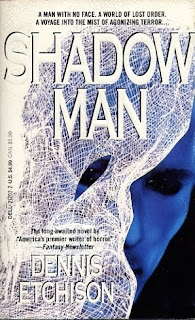 This image thanks to Trashotron
Posted by Will Errickson at 2:15 PM

These are great! (Love that Post Mortem one). I noticed that you mark and date your books, I do that too (even the hardcovers)! I know it destroys their resell value, but I couldn't bear to be parted with them anyway.

Very good post on a worthy subject. I was an Abyss freak back in the day, and made sure I bought every Abyss book that came out. It was the only time (until Hard Case Crime) that I bought books due to their brand. Abyss was like SubPop was with music - if you saw that brand, you knew it was at least going to be worth a look. Their quality started to wane later and they couldn't keep their mission up... but, the early ones are all worth a look, and it was a helluva concept.

Great post, brother! I remember seeing a few of these on the cheap in a used bookstore a while back. Now I'm wishing I had picked them up.

You may very well lose all respect for me after I admit to this Will, but I wasn't a big fan of the line.
Sorry. I just wasn't able to get into a whole lot of the authors, the styles or the story lines of the novels themselves. Probably a certain lack of imagination on my part actually.
I'm a complete sucker for a lot of the old tropes & even cliches when it comes to the horror that I like best. So, while the Abyss line pushed the envelope as far as the reach & the scope of what horror fiction was, I just couldn't get myself mentally or emotionally invested with many of the characters or situations that the plots of these books placed them in.
While I fully recognized the line's contributions in their attempt to keep the genre alive & healthy, I was likely one of the reasons that it failed in the end. Because, as a fan of more traditional horror fiction, I failed to embrace the new like I maybe should have, resulting in a lack of support sales-wise.
And for that, I belatedly apologize.

lazlo - I date virtually all of my books, have for over 20 years now. Write in them as well; I don't really worry about resale value!

J Metro - These turn up frequently on my bookshop visits, just not the ones I'm actually looking for, alas.

bluerose - I hear you, but for me at the time I was hungry for something current and edgy. Over the years I've recommended Abyss titles not to horror fans but people who liked more challenging and experimental fiction. These days, yes, I love those old horror tropes as long as they're done well.

Will, actually, after reading your reply & a bit of further reflection, I think I may have done a bit better at supporting "the new wave" of the time than I thought.
Sure, I may have neglected to buy nearly as many of the Abyss titles as I did Tor's, Zebra's or (later) Leisure's. But, I did follow the early work of Skipp & Spektor, SLOB & it's first couple/three sequels etc.. And enjoyed much of it back in the day. So, I wasn't ( & am not ) a TOTAL traditionalist by any means.
I used to be far more adventurous with what I read in years past & I once had the patience & ability to stick with styles of writing, types of stories & characters that I wouldn'ta now. Maybe I should be ashamed to admit it, but I just don't want to have to WORK my way through books now.
Not that I don't ever want to be challenged by what I'm reading ever again, I just don't want to it to be a burden or a puzzle that I'll always feel like I missed a piece of.
Know what I mean?

I read Shadow Twin years ago and I loved it. I picked up a copy recently but haven't had the courage to see if it lives up to my memories.

Abyss was always a great line when it came to weird ideas and weirder cover art; nary a skeleton with hair, evil doll, or a skeleton child clutching an evil doll to be found.

Just wanted to let you know that I chose this as one of my favorites posts from February, and included a link to it in the 5th "issue" of Spatter Analysis.

bluerose - I *do* know just what you mean!

Richard - Good to know so I can grab it if I see it.

Kat - Yeah, some of their covers were seriously Francis Bacon-esque. Pretty high-falutin' for a horror line!

J/Metro - Thanks so much! Appreciate the link.

So many excellent titles.

I always loved THE WHIPPING BOY. Melaneie Tem's THE WILDING for terrific, too.

"The Whipping Boy" was written by John Byrne of Marvel/DC comic fame.(He does a great Captain America!)

Hmmmm. I need to revisit my shelves to see just which novels I lack from having all of these. I'm missing, I think, only 3 or 4.

As it happens, Ron Wolfe, a former co-worker of mine (he's still there; I've been gone for 11 years now) at the newspaper in Little ROok co-wrote the Abyss book DEATH'S DOOR. Good novel.

I loved picking up new Abyss books. It did not take long to realize that they were going out of their way to publish the new and unusual. Ok, so it didn't work at all times, but hell, even a %10 average would have been fine, yet most of these were hit out of the ballpark. To this day I think that Nancy Holder's opening in 'Dead in the Water' should be taught along side of "The Lottery". Uh, I would not make the same suggestion with Blumlein's short story "Tissue Ablation" which is the biggest fucking sucker punch I have ever read. Just after you have gotten used to the idea that, no, you really, really do NOT want to look up those medical terms any more.... then it stops. And gives you an appendix. The good doctor (and yep, he is a practicing one) might have had a morbid chuckle there.

I reread and reviewed Blumlein's BRAINS OF RATS last month...

Thank you for this excellent post and catalog list. I had entirely forgotten about this line and this post inspired me to go out and go hunting at my local second hand book stores. I managed to find about two dozen of the Abyss line. The quality did drop off after a time, but man, the originals? GREAT.

Glad to help out, Mark! Those days of the Abyss line were terrific, a great time to be a horror fiction fan. Thanks for reading!

You hit the bullseye when you say this line was like Subpop's contribution to music: a bunch of authors looking to write from the heart, instead of what would earn them the most money. A solid line of books. (I'm sure there were some that were misses, but not the ones I read!)

The Cipher is defintely a favourite of mine.