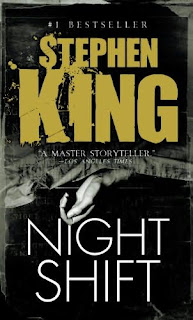 You guys know I rarely feature the latest mass market paperback editions of older horror fiction classics; let's face it, the cover "art" generally sucks. Mostly it seems like Photoshop or clip art hodge-podge of cliches, so terribly bland and boring we fans can only respond with indifference, i.e., not buying the book. Last week on the racks at my local supermarket I noticed an edition of Night Shift (1978) I'd never seen before, and it turns out it's Anchor Books 2011 reprints of several seminal Stephen King works. 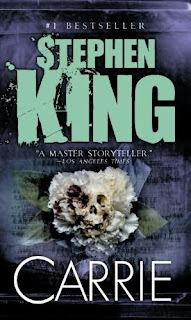 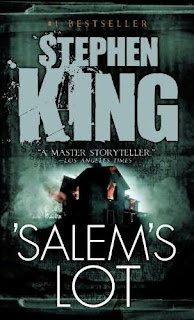 After looking around online I found the newest covers for Carrie (1974), 'Salem's Lot (1975), and The Stand (1978). On one hand I hope it gets folks who may only know King as the author of epic The Dark Tower fantasy series to check out some of his horror stuff; but really, on the other hand, these covers are only merely okay (at least they're not terrible like this pop-art design from the early '00s). The hand poking out from under the sheet on Night Shift is cool, but it has nothing to do with the stories. Carrie's skull-corsage is rather appropriate. The cover for 'Salem's Lot shows the Marsten House... on fire. Is it a firemen drama, à la Backdraft or "Rescue Me"? Sure it is! 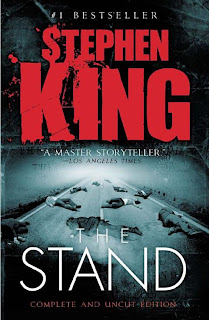 But you gotta love the (unintentional? Most likely) irony of a book called The Stand which features on its cover a bunch of people lying down (I know, I know - they're dead. But still). All of course with King's name so bold and silvery you're practically blinded by it. And they're all going for about $8 each! It's a long way from when the publisher didn't even bother to put King's name on the cover, and the paperback of Carrie would set you back a cool buck-seventy-five. See more of this edition here. 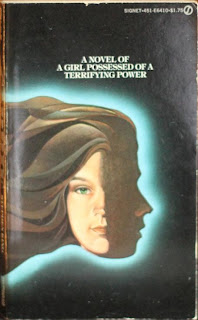 Signet/NAL first paperback edition, 1975
Posted by Will Errickson at 4:00 PM

I saw the title of this post and clicked over to let you know about the new edition of "Carrie" that Random House just e-mailed me about today. But, of course, you already knew alllll about it.

Re: people lying down on the cover of "The Stand". Hilarious.

His name is so big that the uninformed might think that it's a novel called STEPHEN KING written by a group of authors known as The Stand.

That original Carrie cover is crazy cool, though. I just was reading his 'On Writing' the other day and he was talking about how he came up with the story for 'Carrie'. Dude's a genius.

These ARE cool covers, even if they don't quite hit the mark re contents of the book. I hadn't seen the 'SALEM'S LOT cover yet.

I'm looking forward to seeing what they do w/ THE SHINING.

Gotta say the one for The Stand looks pretty good. The others aren't terrible, either.

Is that PET SEMETARY cover for real?

I know he's Stephen King, so the publisher is going to use half the cover to advertise that, "HEY! IT'S STEPHEN KING! WHAT ELSE YA NEED TO KNOW?" but the illustrations seem like the afterthought they are. Whatever happened to the artistry that went into book covers in the 1960s and '70s? The ones you feature so many of on this site?

They are a slight improvement on that pop-art garbage, but just about anything short of a dead dog's eyeball stapled to the cover would be. Those responsible for that Pet Semetery cover should be legally prevented from doing anything that anybody else might see for the rest of their natural lives.

That old Carrie cover is wonderful. Eerie, enigmatic, and fancy that, no space-hogging all caps STEPHEN KING emblazoned across everything. It's as refreshing as a change as seeing a movie without blatant product placement these days.

Given the fact that King's name didn't appear on the paperbacks of his first two books, I figure he's earned the right for his name to be larger than the titles.

The artistry of horror paperback covers went down the tubes during the glut of the '80s, right along with the quality of the writing.

King is one of those "Name above the title" authors so his name in HUGE LETTERS is always going to be the main focus of all his covers.
And no Photoshop montage has yet to beat the artistry of that first paperback Carrie cover with the creepy half-face.

Gotta love the occasional cover art makeover. I do agree, the cover for the The Stand is pretty sweet. I love that book so much! The copy I have has a grim reaper thing(holding his usual weapon) on a horse. I guess maybe it's supposed to stand for the pale horse of death, which sort of fits, but the four horsemen really don't have a part in the apocalypse in The Stand.